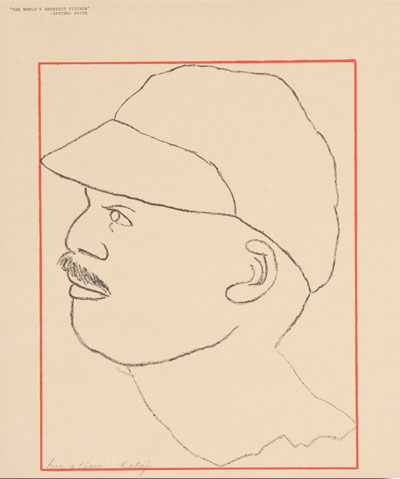 On a cool October evening in Southern California, as Chávez Ravine overflowed with a sea of blue, the Dodgers triumphed for their third and final victory over the Cubs, propelling them headlong into the NLCS. Sorry Chicago. Across town, if you can call the massive urban sprawl of Los Angeles a town, another gathering took place celebrating the iconic visions of baseball. Inside the unassuming façade of Hamilton Press, set on the eclectic-style of Abbot Kinney Boulevard, baseball heroes decorated the front gallery while a new story waited to be told in the back room. The impressive 12-artist roster who came together to create the limited edition portfolio of baseball-themed lithograph prints titled “Line Drive” hung on the walls wrapping around the momentarily still press. With a cover painted by Ed Ruscha, this team includes heavy-hitters John Baldessari, R.B. Kitaj, Raymond Pettibon and Paul McCarthy; pitching staff Terry Allen, Robbie Conal, Joe Goode and Michael C. McMillen; and the golden gloves of Gajin Fujita, Mark Licari, Victor Gastelum, and Greg Colson.

Although best known for his sardonic political portraits, Robbie Conal’s enthusiasm for the national religion is clearly evidenced in his self-described “grinning, ecstatic, glitter-skull, day of the dead-type baseball players.” Less apparent was the dedicated fan-base that existed among the old-school artists of Venice. After numerous discussions with Pat and Ed Hamilton, Conal brought the idea to Ruscha, in a manner akin to “spitting consciousness at the coolest guy in LA,” who at first seemed doubtful of the likelihood of organizing this project. After about a month, Hamilton called Conal, “Ed (Ruscha) penciled his name into the lineup, I think that’s a good sign.” And so it was.

In describing his involvement with this project, Licari addressed the issue of dealing directly with how “it (baseball) is a game with so much history, people have different ways of connecting to it.” One unique connection is that of Terry Allen, whose father made his career as a catcher in the minor leagues and “remained a baseball player all of his life, he literally waited for the World Series to end before he died.” Both artists contributed work that recalls both their father and the game, Licari depicting the “tactile beauty” of his father’s well-worn glove, and Allen’s tribute to his father’s favorite pastime of “cussin’ the Yankees.”

That is not to say that all the artists involved were fans of the game. This project isn’t exactly a homage to the sport, but rather depicts the great variety of attitudes that exist; the historian, enthusiast, analytic and cynic all express their point of view, and like players on a team, it is their individual presence that makes this lineup so effective.

Among the talent scouted for this project was R.B. Kitaj, a noted aficionado of the game. It may seem surprising that Kitaj was such a devoted fan of the all-American sport, being that he spent most of his life abroad, most notably in England. That the Cleveland Indians were his favorite team signals to his youth as a native of Ohio. As an artist and in his life, Kitaj was committed to telling the story of the “underdog,” and for his part, he chose to devote his work to one of history’s greats, Satchel Paige. Paige was not only the first African-American pitcher to join the big leagues, but also the oldest player to make his debut in the majors, joining Kitaj’s Indians at the age of 43. The simplicity of line in this print, topped off with the type-written headline, “World’s Greatest Pitcher” makes a sublime statement. Kitaj’s work does more than simply tribute a single player or sport, but describes a turning point in American history.

The sudden death of Kitaj, last October, gave this project a heightened significance. Conal spoke of the mutual respect he and Ruscha held for Kitaj, “a master of arcana, he was able to put things together that didn’t seem like they could go together.” It is a reflection of the admiration of his peers, in recognition of his work as an artist combined with his love of baseball, that this portfolio is dedicated to honor his memory.

“Line Drive” is a virtual trip through historical fact and fictional legend, and sometimes an unlikely synthesis of the two, like Colson’s innertube/stadium diagram. Pettibon harkens back to the fight for the first swing in the impromptu empty-lot games of youth, while McMillen described his intent as “creating a kind of souvenir” in his composite image of an architectural baseball inhabiting the central Californian coastline. Popular imagery plays a key role in Baldessari’s appropriation of Coach Morris Buttermaker knocking back a cold one, and is given a new twist as in Gajin Fujita’s subtle transformation of the MLB logo into a samurai warrior. Gastelum’s print captures the essence of team rivalry, as he speaks of the “localisms” most visible in the logo-tattooed apparel that decorate stadiums and define alliances.

Of the many stages in the creation of an edition, the print labeled bon à tirer, or simply “BAT,” marks the final version, the standard against which the entire edition is judged. In English, bon à tirer translates to mean “good to pull,” which took on additional layers of meaning with this collection. With a subtle, yet wry smile, Ed Hamilton noted that Paul McCarthy took special pleasure in inscribing those three initials on his Kama Sutra-meets-steroids hallucination of 64. Joe Goode’s somber work also refers to the controversies that have stained the games once-pristine reputation as the sun sets on the mythology of yesterday’s heroes.

Artistic collaborations create a unique contribution to the contemporary art scene where so much value rides on the individual artist’s name. Ed Hamilton finds such collaboration a refreshing outlook, describing how with each artist there are “different problems to solve in taking the idea and adapting it to the press.” However, what makes this portfolio special is how Hamilton is able to render this adjustment invisible as he captures the unique characteristics of each artist in these hand-pulled lithographic prints.

When asked what makes a good manager of a baseball team, Yogi Berra replied, “A good ball club.” So although, for now, it appears that we fans of the boys in blue will have to hold our breath for yet another year, the level of talent found in the Hamilton clubhouse ensures a strong post-season.