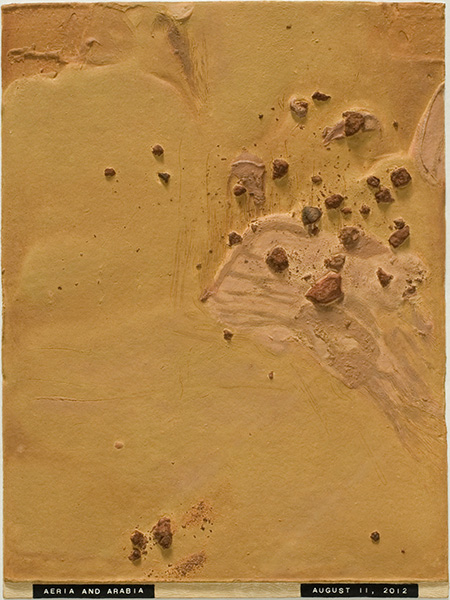 Julião Sarmento’s “L.A. Prints” is both a dip into the vault and something of a mini-retrospective: one print series, “Curiosity’s Eye,” is from 2013; the prior series, four editions, is from 2007. The most recent work, meanwhile, is a video installation, composed of two opposing screens, from 2015. Though not hot off the press, the “Curiosity’s Eye” prints — which are imagined depictions of the surface of Mars following the Curiosity Rover’s landing, in 2012 — still fill the mantel of cutting-edge edition printing, in light of their complex reproductions of a Mars-like surface — dust, rocks and all — out of a paper mixture. Printmaking with ambitious innovation is Mixografia’s sweet spot, and local and international artists including John Baldessari, Analia Saban, Linda Benglis, Abraham Cruzvillegas and Rachel Whiteread have consistently pushed the workshop to expand and redefine the boundaries of their mold-making and monoprint techniques.

Sarmento’s crater prints milk a broad but subtle array of a Martian aesthetic, including brown rocks on yellow sand, red rocks on red sand, and brown and red rocks (including rocks so tiny they merge into sand) on yellow sand, each marked at the prints’ base with two label-maker-style tags. On the left are the Latin names of the (fabricated) Mars selection (e.g. “Hellas Planitia” or “Mare Erythraeum”), and on the right, the specific day from 2012 that it was “photographed.” The prints appear to be a strikingly epiphanous merging of Mixografia’s trademark process with a relief-based sculptural realism: the paper takes a journey to a foreign surface, and that surface acquiesces back into the materiality of its paper self.

The process entails the creation of a cotton pulp-based mixture with great pliability, which is then poured into a wooden frame and onto a printing plate derived from a mold, which in turn is made from the artist’s original sculptural maquette. Apart from the aesthetic success of these Mars excerpts, controversial associations with Mars exploration, which have taken hold in the six years since these were printed, do arise. The prospect has become far more politicized, both thanks to the monumental growth in private sector funding, and the varying positions around how high a public priority that exploration should be. What was probably far more innocent back in 2012 is now something of a minefield, and the works’ formal achievements don’t get to bypass critical consideration of its greater Martian content in 2018.

Meanwhile, Sarmento’s dual video projection, “O Fim do Mundo,” which is making its Los Angeles debut, still carries the potential to address the general zeitgeist of the present. The title, “The End of the World” in English, indicates as much. For most of the 15 1/2 minutes of the video, one screen shows a woman’s face, cropped from the base of her nose to just above her eyebrows, alternately squinting into the camera, scanning her sight line, and occasionally closing her eyes, before eventually returning them to the viewer. The second screen features a beach-eye view of the ocean (it was shot in Portugal’s Costa de Caparica), with the waves breaking and lapping into shore. The sounds of the mildly roaring sea are near constant, and they’re occasionally joined by the amplified sounds of a woman inhaling and exhaling, as if during yoga, or perhaps meditation. Very intermittently, those two scenes are replaced by a woman (presumably; all we see is part of the forearm) obsessively drying her right hand with a white towel, while on the other screen a woman washes her hands in a pool before eventually flicking her fingers free of the water.

You at least have to love the fact that a video titled “The End of the World” is so, if you can forgive the pun: light-handed. So much so, in fact, that it enters the realm of the cryptic. But I suspect that, depending on how well the piece is installed, it will offer an experience that’s meditative in the face of something like an anodyne oblivion. Though they have exhibited non-printmaking work previously, it sets a new precedent with the inclusion of this double-screen video projection. According to the gallery, they “chose this piece to give context to the prints,” and, depending on how familiar you are with Sarmento’s oeuvre, your perception of the relationship between Mars and “The End of the World” will be either more, or less, in focus.