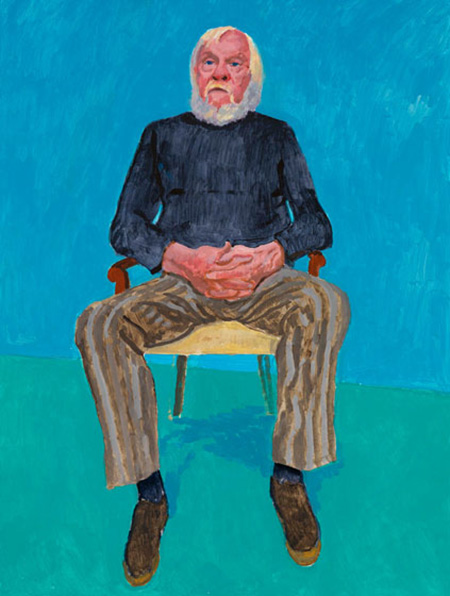 Portraits have been a staple of David Hockney's oeuvre, and reflects his abiding interest in the human face and form. The portraits in ‘David Hockney: 82 Portraits and 1 Still-life” were done over a three-year period, between 2013 to 2016, when he invited sitters to his Los Angeles studio for relatively quick portraits that took place over two to three days. All are acrylic on canvas that measure 48 by 36 inches, all hung in one large gallery with a freestanding wall down the middle. Executed in bright colors, the portraits pop against the orange-red walls of the gallery. It’s something of a guilty pleasure to browse through, checking out differences in body sizes and shapes, facial expressions and clothing, and picking out people you might know or who are easily recognizable public figures.

Subjects include other artists (John Baldessari, Ray Charles White), gallerists (including his own in Los Angeles, Peter Goulds of L. A. Louver), family members (his sister, his brother, and sister-in-law), friends and associates, and even his two housekeeper/cooks (Patricia Choxon and Doris Velasco). Hockney has known many of the sitters for decades, a testament to his penchant for long friendships.

Each subject posed in the same yellow-upholstered chair, against the same background and floor, although in the paintings Hockney wields artistic license and varies the colors a bit. Sometimes the background is aqua and the floor is blue-gray, and sometimes visa versa. Sometimes stripes appear on the floor, and in a portrait of J-P Gonçalves de Lima, a longtime studio assistant, there’s a colorful woven rug at his feet. There is an assured briskness in capturing each person, part of the Hockney style, and most of the time it works beautifully – like getting a strong impression from meeting someone interesting at a luncheon.

One of the liveliest portraits is of art afficionada and cable show host Joan Agajanian Quinn. Wearing a rolled handband, jewelry, and matching jacket and long skirt, she looks out of the frame with bright, merry eyes and the mischievous smile she often wears in real life. Benedikt Taschen, founder of his namesake publishing company, sits stiffly upright, looking straight ahead and wearing a dark jacket — his red V-neck sweater provides just the accent to suggest something fiery and electric in his character. I felt especially drawn to portraits in which people are wearing stripes or checks, such as Gregory Evans, a longtime friend and business manager, in his striped boatneck, and Edith Devaney, curator of this exhibition at the Royal Academy of Arts in London, in her striped turtleneck and jeans. The exhibition also includes a portrait of Stephanie Barron, LACMA’s curator of the show, in a red cloak. And yes, there are a few misses – such as the portrait of a woman a few to the left of Quinn’s, who sits there with opaque, soulless eyes.

The one still-life is due to the fact that Ayn Grinstein had to reschedule her sitting due to a death in the family. Hockney had already set up to paint, and did this table-top arrangement instead. Red pepper, lemon, bananas, and other fruits and vegetables are lined up on a blue bench. It makes for a rather welcome counterpoint to all the portraits. There are more still-lifes that pre-date these by a few years at Hockney’s recent L. A. Louver show made up of works done with his iPhone and iPad. These witty and engaging electronic paintings of as flowers in vases, fruits on a platter, an armchair piled with clothes are accompanied by four self-portraits, with one of the artist grimacing.