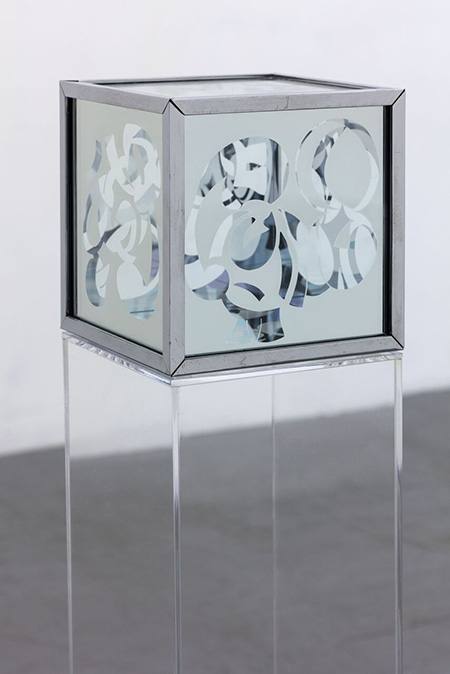 This is the artist of the cube. The cube seems impervious to spontaneity, immune to improvisation, and resistant to intuition. But this exhibition will feature the many cubes of Bell, who has somehow been renewing the six equal squares that contain the perfectly symmetrical hollow space for sixty years. Because the artists of post-war Los Angeles have left the territory of “contemporary” and have entered into the precinct of history, this Homage to the Cube is well timed. When Bell first appeared on the art scene, he was interpreted and discussed within the parameters of New York Minimalism. Writers, mostly from New York, compared the squareness of the cube to the metal boxes of Donald Judd or the metal carpets of Carl Andre. But geometry does not necessarily coincide with minimalism, and to think of Bell in the same terms as Robert Morris is to think in terms of simple morphology and entirely misses the simple act that his cubes were transparent.

Importantly, the cubes were not allowed to touch the floor. They were given their own proud socle, lifting them as if on a transparent beam to the level of the viewer’s face. Their translucence was offered up, as it were, to be examined and inhaled. The sheer cubes captured and held available light just as they contained local space. Unless the artist vacuum-coated the surfaces, the cube had no outside; there was only the inside. People stare at a Donald Judd, but they gaze into a Larry Bell.

Bell himself is characteristically blunt and to the point, eschewing the philosophical theorizing that accompanied New York Minimalism: “You can’t see anything if there’s no light, and you need space to put it down.” The cubes shared the status of being a “specific object” with a flat gray Morris box in that they are self-referential. At the same time, they lack the gritty sense of industrialization that characterized the materials of Andre and declare their collaboration with the unique light of Southern California. Although Bell is often seen as part of the aerospace experimentation in Los Angeles, he works in glass, a very old material. He is not, never has been he asserts, “high tech,” nor is his work perfect. This artist sees, feels, and looks at the glass he uses as a living substance that is “organic” and even “sensual.” Where we see hard and slick and transparent, Bell experiences as living and breathing, a substance that is in fact responsive to spontaneous inspiration.

That said, it is interesting to note that the earliest works were patterned, such as a 1964 cube with oval patterns, made, according to the Tate, “by covering the glass with a chemical treatment that cuts off certain bands of light, so that they appear in different colors depending on the viewing angle.” But what is clear about these early and elaborately colored and patterned cubes is that they were transitions, leading Bell out of and away from his mirrored paintings. The later cubes from the mid-sixties were simplified. Able to exist without designs and content, they survive with coatings of quartz and chromium. In the case of the “Terminal” series of 1968, the edges of the cube are redrawn with thin lines of metal, or “binding,” but the diagrammatic effect is denied by a coating of silicon monoxide. Bell was interested in the way the light was “shaped” by the cube structure.”

If his early works were “illusions,” as he put it of volume, these later boxes were volume itself or “essence.” More recently, Bell eliminated the metal strips so that the cube now freely floats, absent its boundaries. Not only is age-old glass elevated on a modern Plexiglas pedestal, it is also approached with a new intuition: that a transparent structure must also be a sculpture because, as the artist said, “The space declared by these new sculptures becomes the work.” The space is “declared” by the act of coating, an improvisation that becomes the concept — the capture of light and air in a container — announced as the focus of contemplation, a Wittgensteinian proposition placed in a gallery: the bare minimum of a three-dimensional object. A sculpture, suddenly something, is declared out of nothing.