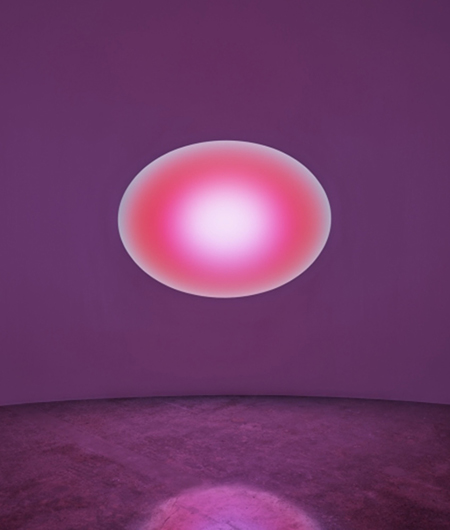 In 2013, James Turrell had a trio of summer blockbuster exhibitions across the U.S., at the Guggenheim, MFA Houston and Los Angeles County Museum of Art. Large-scale illuminated installations bathed visitors in luminous hues of electric color. Concurrently, Kayne Griffin Corcoran’s expansive exhibition galleries were filled with a more earthy scene of surveying equipment, photographs, plans and models that tantalized viewers in anticipation of the artist’s massive Roden Crater project, commonly referred to as Turrell’s magnum opus. A pioneering figure of the Southern California Light and Space movement of the 1960s, Turrell has deftly intertwined — and innovated — disciplines of art and architecture in pursuit of his true medium: light.

The current exhibition, anchored by four “Glass” works installed in separate, but adjacent, gallery rooms, offers greater intimacy with Turrell’s vision. Each work consists of a portal of sorts, a single geometric shape carved into the walls of the gallery. Slowly evolving hues of light illuminate the gallery space. A unique shape anchors each separate room — in sequence, a perfect diamond (a square tilted at a 45-degree angle), horizontal ellipse, and a comparatively small horizontal rectangle. Each emits enough light to completely saturate the viewing space, slowly cycling through hundreds of colors: neon pinks, soft yellows, electric blue, emerald green, and so forth. The etched glass of these wall works creates a distinction between the edge and center in terms of how color is perceived, but is itself barely perceptible, as Turrell’s light-emitting diodes create an atmospheric illusion of unending space cloaked in veils of colored mist.

The variously shaped portals alter the viewing experience, pushing into the viewer’s space with the rectangular “Glass” works suggesting an oversized smart phone gone awry, the elliptical cut-out beckoning us in a sort of technological Jacob’s ladder. Alternately, the proximity of the installations creates a sensation not unlike the immersive “Chromosaturation” rooms of Carlos Cruz-Diaz. While bathed in a sea of purple light radiating across the long curved wall of “Jhuya 20(00), Curved Elliptical Wide Glass,” the entry into “Small Glass” glows in a tangerine hue such that the interaction between the two spaces becomes an experience of its own. The doorway becomes a physical manifestation of Mark Rothko’s color fields, an early influence on Turrell, who sought to use light to capture the feeling he had viewing projected slides of the Abstract Expressionist’s paintings.

In addition to the experiential “Glass” works, the final room of the exhibition features maquettes from the early 1990s of fictional structures that are reductive in form but rich in references. The group is reminiscent of the post-French Revolutionary architectural fantasies of contemporaries Claude-Nicholas Ledoux and Étienne-Louis Boullée, whose 18th-century architecture anticipated the stark geometry of the modern era. As in the “Glass” works, there is a transcendental aura to these designs. “Missed Approach” (1990) evokes the ancient Mesoamerican pyramid, El Castillo. “Transformative Space: Basilica for Santorini” (1991) provides an update of the classical Roman Catholic cathedral. “Cold Storage” at first glance assumes a cold monolithic stance. The three-story construction is, however, a recurring cultural form in which the square, an ancient symbol of the earth, meets the sky, represented by a rounded sphere through the octagon, suggestive of their union, eternal life and renewal. If realized in architectural scale it would provide a fitting residence for the artist’s light works.