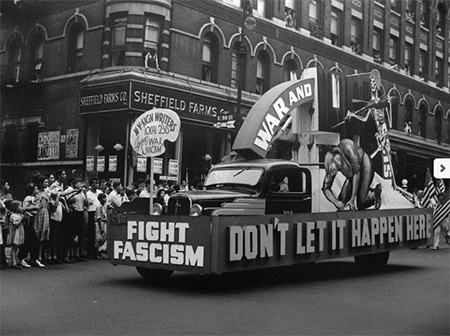 “Signs of the Times” is a high quality sampling of fine art photography reaching back almost one hundred years. That said, the show argues that the same social, political, and cultural issues have remained continually relevant from the 1920’s to the present day. Symbolically, through diverse images, it links today’s urgent crises to scenes captured from the past. Curated by the gallery’s founding director Burt Finger, the show is a tribute to Ilona Albok, the daughter of Hungarian photographer John Albok (1894-1982).

Ilona shared thoughtful insights about photography and signs with Finger as they looked through photographs together. The significance of signage is fleshed out by both Albok’s images and in those of several street photographers. These signs can be read as literal announcements and, more importantly, as metaphors symbolizing an era representing everyday people and places. The exhibition includes many examples of Albok’s work from the 1930’s and 40’s as well as several other artists working with the medium such as David Graham, Lucienne Blok, Jeffery Silverthorne and Bill Owens.

The exhibition touches alternately on traumatic historical events — the nation at war or the fall of the twin towers — and people on holiday or at funhouse attractions. It meanders in no particular order from through life’s range of challenges and struggles, never losing sight of the sense of hope residing in all of us. Striking images draw us in, sometimes with a sampling of work by one photographer, or in other moments a juxtaposition of several opposing themes and styles by multiple photographers.

Extremely poignant right now, considering our domestic political environment, is Albok’s “May Day (Fight Fascism),” an image taken of a truck in the 1937 May Day parade. A caption identifies the attraction as belonging to the “N Y Sign Writers,” while bold letters attached to the side scream “Don’t Let It Happen Here.” Given the recent rise around the world and at home of authoritarian strong men and right-wing parties this image is more than representative of a historical moment.

Issues concerning race seem to be coming to a head these days, even though they never really went away. Back in 1940 there was segregation and Jim Crow, whose injustices compelled Jack Delano to document the twisted logic of this inhumanity in the ironic “Untitled (Woman in front of Hairstyles).” An African American woman in a 3/4portrait stares defiantly into the camera. She stands in front of a wall filled with advertisements promoting various hairstyles for white women, not one of which would apply to her. Her expression conveys a feeling of being trapped within the confines of a society stratified by race.

People often forget the major place socialism has in the systems of Social Security, Medicare, Medicaid, and free public education through the 12th grade — just a few of the benefits of our mixed economy that required long struggle to add to the social contract. Tying the thread to the 1930’s, two intense photographs by Lucienne Block, “Midnight at New Workers School” and “Frida in front of the unfinished Unity Panel” conjure memories of the connection between art and then radical politics. Here banners speak to “workers” and an unfinished mural by Diego Rivera that depicts Marx, Lenin and Trotsky as revolutionary leaders who for Rivera inspired social change.

The great recession, now more than a decade ago, plundered the homes of our middle class, so that a narrow and amoral elite, indifferent to the idea that everyone deserves a home, could clean up. This state of affairs, and how the architects of that travesty are connected to one another is explained in detail by Aaron Glantz in his book “Homewreckers: How a Gang of Wall Street Kingpins, Hedge Fund Magnates, Crooked Banks, and Vulture Capitalists Suckered Millions Out of Their Homes and Demolished the American Dream.” Bill Owens captured a similar situation in his 1971 image “We have to move,” where a suburban family stands in their front yard with a “for sale” sign. Irony and pathos come together during the age of Nixon, a period that coincided with the early rise of the radical right, a contentious force that has now brought us to the brink of disaster.

These various lenses of “Signs of the Times” remind us that photography documents a current time that becomes the past, in this case morphing into a warning meant for future generations about what happens when greed becomes the determinant of a bent moral compass.  Perhaps we can put it these heavy issues away in the back of our minds and think about an escape to the circus as in Jimmy Katz’s “World of Wonders Banners,” or to the beach with Neal Slavin’s “Channel Swimmers.” Finger, Ilona Albok, and all of the photographers on display here already know that this is wishful thinking.