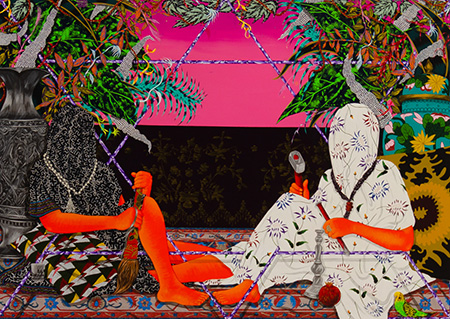 Two figures stand back-to-back, grasping hands in the first painting we encounter in “Scatter My Ashes on Foreign Lands.” The work’s title, “A Distorted Reality is Now A Necessity To Be Free,” provides a lens through which Amir H. Fallah views the world. Based in Los Angeles, his parents emigrated from Iran during the Iranian Revolution. He now finds himself living in and reacting to the warped reality of American culture and political rhetoric. The exhibition is anchored by ten portraits of veiled subjects, whose gender, ethnicity and other characteristics typically used to label them are hidden from view by drapes of patterned fabric. Instead, one sees the objects that imbue their everyday lives with meaning: Nike high tops, beakers, paint, pearls, candles, camera, a medal, a tool. One can’t help but ponder which were carried on immigrant journeys and which were acquired in new landscapes. These objects hint at dialogues they might undertake with their owners, were that possible. We get the feeling of being privy to private conversations, breaking through barriers to attain some measure of intimacy even as we recognize their inherent mystery.

A trio of tondos (including “Life’s Eternal Dance”) are centered by orbs of saturated color surrounded with botanicals and iconography. It’s a mash-up culled from multiple cultures and visual languages, from cartoon characters to elaborately-decorated functional ceramics. Collectively, they punctuate the ways the mundane intersects with the cosmic, and highlight the hybridity and fluidity at the heart of Fallah’s practice. In two works created combining multiple media, the layering of materials mirrors the complexity of subjects’ histories and identities. Throughout the exhibit one sees Islamic artistic traditions here and Western art historical references there. It’s a mix that further amplifies the intersections of culture both present and past. Countering narratives that stereotype immigrants as a monolithic block, the artist elevates the exquisite individuality of each person he paints, while also widening the view towards a common humanity that centers his work.