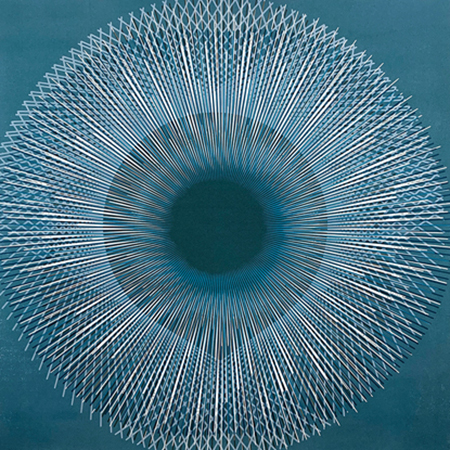 Carrie Ann Plank’s mixed-media abstract prints in her exhibition “Matematisk” combine a wealth of scientific influences — mapping, numerical sequences, fractals, wave patterns, sound sources, magnetic field variations — and synthesize them into Op Art mandalas of a sort: objects of meditation, but without any metaphysical mumbo-jumbo. Matematisk is Danish for ‘mathematical,’ and the geometry of Plank’s images, all square or circular in format, declare their geometric orientation, as well as the influence of Scandinavian color and climate thanks to a recent residency in that happy, rational nation.

Plank creates digital drawings which are then laser-cut into printing blocks, then inked and printed manually. The overlaid patterns create complex webs that hold the eye without ever quite settling into stasis. They seem to embody cymatics, the study of patterns created by vibrations. Where waves are in sync, they double in amplitude; where they’re in opposition, they cancel each other out.

Plank’s symmetrical, complex structures suggest jewels, flowers, eyeballs, and solar systems — as well as the dream catchers of native American cultures. Both unitary iconic objects and metaphors for metamorphosis, they bridge the philosophical gap between Eastern Being and Western Becoming. Her series titles reflect this dichotomy: “Interference and Confluence” weigh in on the scientific materialist side; “Intercession and Pullulate (to birth),” the spiritual, humanistic side.