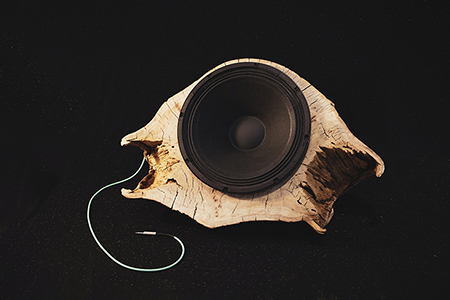 Dylan McLaughlin’s solo show, “Songs of Tempestuous Rising and Falling” combines drawing, aerial photography, text, video, and sculpture to examine the resonant effect of industry and colonialism upon the landscape of the American Southwest.

One of the first works upon entry is “Mexican Hat Disposal Cell Resonates,” a three-part work comprised of a photograph, text on paper, and a drawing. Its composite aerial photograph captures the surface of an Uranium mine on Navajo land. Most of the photograph is occupied by gravel surrounded by an exposed, red and lushly textured earth. Without a horizon the ground becomes intensely abstract, divorced from the scale and gravity of a human body. A sheet of grey paper hangs adjacent to the photo with text which, written using a manual typewriter, recalls the sound of clacking keys. Words on the page catalog the history of different corporations that ran the mine, as well as the amount of radioactive tailings that the mine produced, and its proximity to a Navajo elementary school. A drawing of the mine’s cross-section further distills its full presence by representing its depth.

Though reminiscent of Joseph Kosuth’s “Three Chairs” (1965) in strategy, McLaughlin uses this three-pronged approach to illustrate the physical impact of conceptual ideologies that might use the “landscape” concept as a surface for extraction. “Mexican Hat Disposal Cell Resonates” reminds us that this seemingly dormant landscape vibrates in response to that altercation with radioactive waves.

Other works in the show look at the Rio Grande to question the ways in which its Albuquerque riverfront has been extracted from daily use in the interest of conservation. It references the immanent extinction of piñon trees as a result of climate change, and the drone of power lines which, while inaudible to the human ear, nevertheless create visible ripples in the surrounding landscape. In each instance technology features prominently as a conceptual element that enables our ability to listen (or witness) the resonant frequencies of the environment through apparatuses like a drone camera, a contact microphone, or a subwoofer.

At the far end of the gallery, two sound suits flank a video projection. The sound suits face one another like twins. The first is made of burnt orange denim with a copper hieroglyph panel placed over the neckline, where one’s face would emerge. The second is almost exactly the same, except that its “face” has a copper coil panel. The video captures a figure wearing the black sound suit in a desert landscape. The figure dances while playing the coiled sculptural poncho like a synthesizer with low drones. Inspired by 2019 Poet Laureate Joy Harjo’s poem and sharing the name of the show, “Songs of Tempestuous Rising and Falling,” this three-part installation injects performance and improvisation into the exhibition. In this work, McLaughlin suggests the possibility of communication with our more-than-human kin, a possibility that might vanquish the monsters of late capitalism and settler ideology.