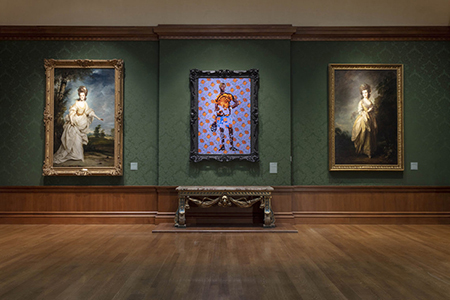 It’s hard to imagine any conventionally executed oil on linen portrait simultaneously constituting and commenting on site-specific, conceptual, political, pop and classical art. Kehinde Wiley’s “A Portrait of a Young Gentleman” does so while also explicating on contemporary issues of race, class, gender and social justice. The artist, 44, grew up in L.A. and now bases himself in New York City. He is known for his paintings of contemporary African Americans set within elaborately patterned floral fields that engage in sardonic and campy/pop-styled visual send-ups of iconic imagery gleaned and referenced from Old Masters’ paintings. In 2017 Wiley received the commission to paint the official presidential portrait of Barak Obama for the Smithsonian National Portrait Gallery in Washington, D.C.

Wiley has acknowledged that his visits to The Huntington’s art galleries as a kid, and how his fascination with the museum’s renowned collection of eighteenth-century British grand manner portraits contributed to his desire to become an artist. This year marks the hundredth anniversary of Henry Huntington’s purchase of Thomas Gainsborough’s “The Blue Boy,” completed around 1770. Not long ago the Huntington finished a major restoration of “The Blue Boy,” which Museum Director Christina Nielsen has described as “our most famous painting.”

In what many might regard as a bold gesture, The Huntington commissioned Wiley to create a portrait in his signature Hip Hop inflected idiom that would visually allude to Gainsborough’s aristocratic youth (whose actual identity remains uncertain). What’s more the Huntington also would remove “The Blue Boy” from its central perch on the Thornton Gallery’s wall, and hang it on the wall at the opposite end of the room. For many years this had been the location of Thomas Lawrence’s nearly as celebrated portrait of Sarah Goodin Barrett Moulton, “Pinkie” (1794).  Wiley’s “A Portrait of a Young Gentleman,” now hung in “The Blue Boy’s” vacated place, slightly modifies the title of Gainsborough’s original title for “The Blue Boy” (“Portrait of a Young Gentleman “). “Pinkie” is now exiled to the hallway wall outside of the main gallery, where she hangs as just one of the many other fine paintings exhibited there.

Gainsborough’s and Wiley’s two paintings now bookend the Thornton Gallery, and the two figures appear something like two prize fighters facing each other from their corners, waiting to approach one another for the big event. At one end there’s “The Blue Boy,” painted at a time when England was amongst the world’s leading slave-trading nations. At the other, Wiley’s stylishly bearded, bleach-blond dreadlocks-bearing Black man wearing a tee-shirt, beach shorts, iWatch and designer running shoes. This attractive fellow turns out to be a Senegalese model, whose exact identity, like the Blue Boy’s, remains unknown. The unlikely pair find themselves placed opposed to one another, yet seem perhaps to flirt across the room’s staid yet wide divide. Indeed, Wiley identifies himself as a gay man, and “The Blue Boy” has become for some a symbol of homosexual identity (a topic explored in Valerie Hedquist’s 2020 book, “Class, Gender and Sexuality in Thomas Gainsborough’s The Blue Boy”).

Wiley animates his “Young Gentleman” with gestures that mirror “The Blue Boy’s.” Both fellows gaze outwardly to parry our eyes, and both stand with their left arms coyly bent, hands resting insouciantly on hips. “The Blue Boy’s” left foot strides directly forward, propelling his body out of a stormy backdrop of brown clouds. He looks like a youth ready to walk into a world he feels confident will accommodate his needs and desires. Wiley’s figure stands with his feet splayed outwardly, braced, it appears, to defend himself from the world rather than poised to conquer it. He also seems to lean and fall softly backwards, receding into the spacious and flowery field that holds and perhaps camouflages him, protecting him from a world festering with vile and persistent racism.

Wiley fixes his painting within an exact replica of Gainsborough’s elaborately carved wooden frame, a gesture of social indictment. The artist seems to be saying that although t