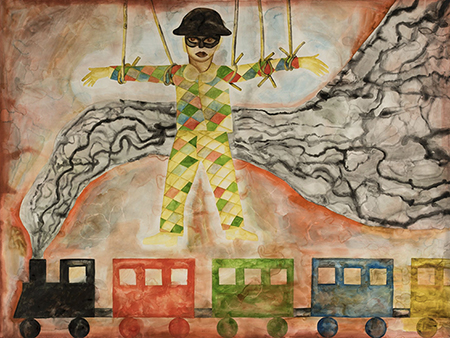 Francesco Clemente is an Italian artist who has also lived in New York as well as in India. The landscape and culture specific to these disparate locations have influenced his paintings. Early in his career during the 1980s, Clemente was often shown with other Italian painters regarded as part of the Transavanguardia movement — the Italian version of Neo-Expressionism, painters who privileged figurative art and emotion over conceptualism. Other artists associated with Transavanguardia included Sandro Chia, Enzo Cucchi, Nino Longobardi and Mimmo Paladino.

It is noteworthy that the Vito Schnabel Gallery’s recently opened outpost at the Old Post Office in downtown Santa Monica hosts the exhibition, Schabel’s father being Julian, one of the most prominent among American Neo-Expressionists. In the spacious galleries of the newly renovated Art Deco style building (a cultural landmark built during the Depression in 1938) are more than twenty large scale, as well as modest sized Clemente paintings completed between 1998 (OK, so the title is a misnomer) and 2021. The works have been installed on both new white walls and on the original concrete structure, between large windows with bright views to the outside. The high ceilings and refinished wooden floors create a warm viewing environment. Some will recall waiting in line to buy stamps in the entry space, though most will appreciate the tasteful and subtle renovation that allows the architecture and artworks to co-exist.

While self-portraits like “Summer Self IV” and “Summer Self V” (2011) and the 1998 portraits of “Fran Lebowitz” and “Toni Morrison” are examples of Clemente's skill in capturing the personality and likeness of his subject, recent large-scale (60 by 80 inches) watercolors on paper like “Rising,” “Victory” and “Harlequin in Love” (all 2021) illustrate the quirkiness and depth of his imagination. In “Harlequin in Love,” a childlike rendition of a choo-choo train with black, red, green, blue and yellow cars traverses the bottom of the composition, while a black engine blows a billowing cloud of gray smoke across the middle. A masked harlequin with outstretched arms hangs from five ropes that extend down from the top of the painting, as if being lowered onto the train. In this dreamlike image, Clemente captures the comic / tragic dualities inherent in the harlequin subject. “Victory” centers attention on a galloping racehorse with five legs darting across the bottom half of the paper beneath a light pink feather-shaped cloud. As in so many of Clemente's other works, this is a fantastical image of an exaggerated reality.

Clemente is a facile painter who infuses his works with a poetic, sensual and melancholic aura. The works are representational in a loose, childlike way, which is what makes them so seductive. The compositions are usually sparse, their negative spaces often filled with layers of textured brushstrokes. The paintings conjure ambiguous, personal narratives that feel spiritual or mystical. Clemente uses common symbols like clouds, flowers and skulls to speak about universal themes of life, death, war, peace and the passage of time. In “White Flags 1” (2015), a flock of black birds swirl around the shape of a heart that is positioned between two plants on a shoreline. The birds peck at and fly away with small pieces of the heart, which has been pierced by a white flag, a symbol of surrender. From what, or to whom is left up to the viewer.

A pair of paintings created during the pandemic, titled by their dates “5-11 2020” and “5-14 2020,” allude to specific moments, as well as the passage of time. “5-14 2020” depicts the trope of sand moving through an hourglass. The gigantic timepiece filling the composition is placed in the center of a black background, light brown sand flowing through its reflective surface. The date is painted on pink/orange rectangles that appear on either side of the hourglass. In “5-11 2020,” red roses are contained within the shape of a light blue heart and surrounded by gold-toned bricks. A sign lettered with the date is nested among the flowers.

A 2001 fresco, “Two Trees,” is divided into three sections. This evocative and mural scaled 118 by 236 inch work depicts two moments in time, clearly a before and after. On the left side of the yellow background is a lush fruit-bearing tree with an array of white rectangles suspended from its branches with the presence of a spiritual offering. On the right panel, the tree has been cut, its crown crumbled to the ground, the white papers whisked away by a great wind.

Clemente is attuned to what is happening around him. He draws from the landscape as well as from history to create narratives that are personal, but which resonate with universality. The beauty of the landmark architecture works well with the tastefulness of the installation to mark Clemente’s return to Los Angeles after an absence of over 20 years as a cultural event.