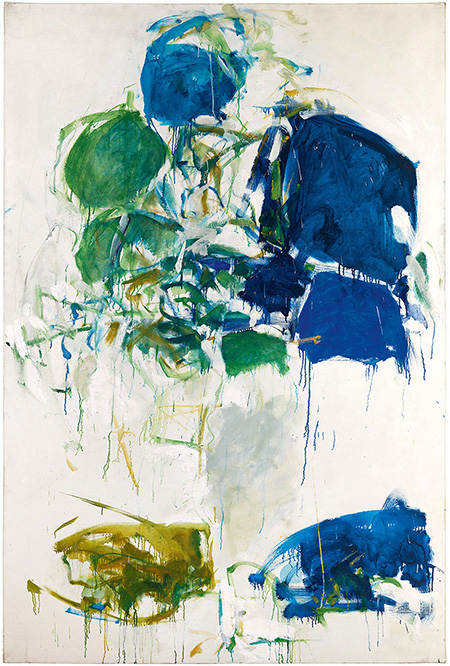 Joan Mitchell, “Sunflowers,” 1990-81. Courtesy of the collection of John Cheim

Just before Christmas I made a pilgrimage to “Joan Mitchell,” the long-anticipated retrospective in San Francisco. I call it a pilgrimage because Mitchell resides on a list I keep in my head called Top Five Favorite Artists of All Time. I would not, could not, have missed this show for the world. To the extent art-lovers gravitate toward works whose stylistic timbre resonates within our psyches, I have long felt a buzz upon beholding Mitchell’s lyrical abstractions, which marry large-scale demarcation of space and form with intricately calligraphic slivers of color and arcing black lines that can impart the look of stained glass. A Mitchell painting is like Montana’s big-sky country. It varies vastly from one quadrant to the next, will not be pigeonholed or hemmed in, contains Whitmanesque multitudes and as such is quintessentially American — even though the artist adored France and made arguably her most exultant paintings in her studio above the village of Vétheuil, an hour northwest of Paris, situated on the river Seine.

How to do justice to a figure as protean and complex as Joan Mitchell? Having culled more than 80 works and a treasure trove of archival photographs, sketches, drawings, and juicy personal correspondence, co-curators Sarah Roberts and Katy Siegel have answered that quandary with a deftness born of deep research and keen insight, evinced by the exhibition’s intuitive flow and revelations brought forth in their probing, refreshingly unpretentious catalogue, published by SFMOMA and Yale University Press. To take on this artist in 2021/22 is to time-travel between contemporaneous and contemporary concerns, It is to engage without eggshell-walking the central dilemmas of reckoning with Mitchell:  How do we, if it is even possible, separate the artist from the persona from the person?

Central to that reckoning are her struggles to compete and flourish as a “lady painter” (to borrow the title of Patricia Albers’ revelatory 2011 biography of Mitchell) in the heyday of male-dominated Abstract Expressionism. “It is easy to get caught up in the drama of her privileged upbringing, her friends and lovers, her sometimes outrageous behavior,” Roberts observes. “She lived life at an operatic pitch, and her travel, losses, and loves all impacted or came through in her work, so a key problem we had to grapple with was how to talk about the contours of her biography as they intersected with the paintings themselves without sensationalizing or overemphasizing the life.” “We were very conscious of criticism that accounts of women artists are overly biographical,” Siegel adds, noting that while the artist’s style owed much to her appreciation of Monet and Impressionism, “it was van Gogh’s emotional intensity and profound respect for life that really defined beauty for her.” Monet’s voluptuary hedonism mated to van Gogh’s feverish agitation, adapted to an abstract idiom — that may be the crux of Mitchell’s singular integration.

The trappings of her life — heiress to a family fortune, prodigious affairs with a who’s-who of post-WWII cultural figures, heavy drinker, heavy smoker, rail-thin physique in cardigans, denim, and oversized sunglasses, disarmingly generous with friends before turning on a dime into an acid-tongued dragon lady — betray the pitfalls of “painting while female.” We ogle Willem de Kooning’s good looks, lothario conquests, and week-long benders as signposts of la vie bohème; we mythologize Pollock’s pissing in Peggy Guggenheim’s fireplace and crashing his convertible into a tree; we observe Diebenkorn’s and Rothko’s obsessions, neuroses, and academic rivalries as bullet points on the résumé of the archetypal misunderstood artist whose talents are too unfathomable to contain. Why do too many of us glamorize male artists’ transgressions and tragedies even as we denigrate the equally unconventional natures and choices of their female contemporaries? Siegel and Roberts disentangle such knots largely by letting Mitchell’s gifts speak for themselves in a chronological survey, which in my view culminates in her late-1960s/early-1970s paintings executed at the Vétheuil estate. The gallery showcasing these exuberant works is a temple to pictorial luxuriance, nowhere more concentrated than in the three-panel masterpiece “Sans neige” (“Without snow,” 1969), the show’s strutting peacock, an object lesson in push/pull worthy of Hans Hofmann — whom Mitchell admired, although she could not abide him as a teacher in the late 1940s (quitting his class after only one session).

Given my admitted admiration I do have quibbles. The exhibition at SFMOMA is underlit, ostensibly so as not to fade delicate pigments. This has the effect of tamping down these gloriously brash works, born of Gallic sunlight streaming down on fields and gardens or filtered through milky, silvery clouds. It is an unfortunate detail, as the paintings demand vivid light to actualize their impact as transliterations of Proustian memory. Coming as a welcome revelation, the exhibition showcases an unexpectedly broad range of texture from a painter whose marks are sometimes caricatured as monolithically spindly, sinewy, and elegant. Paintings such as “Mud Time” (1960) abound with passages of near-parodic gloppiness, gestures welling and receding with unrepentant abandon. This is part of Mitchell’s confounding Hydra-headedness. At times she upholds a commitment to beauty that seems downright reactionary, while elsewhere she tosses beauty to the dogs and comes out with something facile, ugly, and texturally mutant, more in the vein of Dubuffet, Kiefer, or Asger Jorn than the French sensualists she emulated, Monet and Cézanne foremost among them. Her devotion to van Gogh provides the missing link to her attitude toward surface.

The exhibition inevitably faces the overarching challenge of any retrospective: how to telescope a sense of trajectory and arc into limited square footage. Mitchell is tricky in this regard. By capping the exhibition with the exquisitely sensitive “Untitled” (1992), completed the year she died, the curators demonstrate that this artist, when she was on, never lost her almost shamanic power to encapsulate intimate reminiscences of place and mood. To follow the exhibition’s visual logic, she possessed this talent practically from the advent of her career and sustained it valiantly across the decades. While this corroborates her tenacity, it also reveals an absence of the daemonic mutation and forward motion we find in artists who shifted stylistic paradigms more dramatically.

The three posthumous retrospectives I have most enjoyed over the past three decades — “Piet Mondrian:  1872-1944” (MoMA, 1995-96), “de Kooning:  A Retrospective” (also MoMA, 2011-12), and “Roy Lichtenstein:  A Retrospective” (at the Art Institute of Chicago in 2012) — all concluded with poignant summas of the artists as lions in winter. Mondrian abandoned his longstanding compositional dogma, indeed the tenets of his entire philosophical system, in his final paintings, “Broadway Boogie-Woogie” (1943) and the unfinished “Victory Boogie Woogie” (1944). This epochal development showed him still defiantly innovating after a lifetime of ruthless stylistic evolution. De Kooning, afflicted with dementia, made his swan dive with ever more porous compositions, allowing viewers to witness a peerless aesthetic mind in the process of becoming moth-eaten and inchoate. Lichtenstein, having established his Ben-Day-dotted syntax at his career’s start, never ran out of subject matter, applying that style to an unceasing succession of series that might never have expired, had he himself not.

In their retrospectives one sensed these painters’ humanity, their fragility and concurrent indomitability, in a way one doesn’t quite sense Mitchell’s. If that feels less than wholly fulfilling as a viewing experience, perhaps it speaks to her particular method of painterly distillation. Perhaps she became too good at evaporating her personal karma out of her hymns to flowers, trees, rivers, and vistas, grounded though they were in her fine-grained emotional observations. Maybe she succeeded too spectacularly at elevating specifics to universals, effectively cleansing the works of the brittleness that vexed her, the perennial spats with friends and “frenemies,” the tortured relationship with Jean-Paul Riopelle, the dogs and dogs and more dogs that she adored, all those lovers, all those cigarettes, all that wine and scotch. Who would have dreamt that her method of essentializing might surpass even Mondrian’s, who believed he could neutralize nature’s specificity by reducing it to perpendicular lines and primary colors?

In recent years, thanks to thoughtful, context-building exhibitions such as this and soaring prices fetched at auction, the story of Mitchell’s exclusion from the boy’s club of First-and Second-Generation Abstract Expressionism becomes less relevant than her journey of ungendered stylistic self-discovery. In the absence of a major late-life plot twist on which to pin pat truisms, what Mitchell leaves us with is a narrative of color, line, and form, jotted, streaked, dripped, floating, and dissolving like mists, clustering and subdividing like cells, standing in for every dream we dare project onto it.