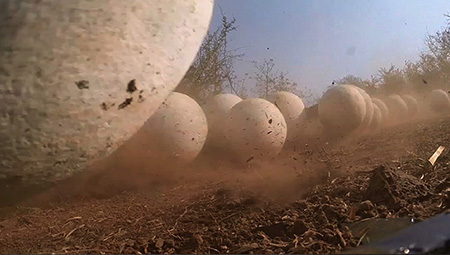 “Networked Nature,” a group exhibition curated by Jason Foumberg, begins with “tx-mirror” (2018) by Martin Reinhart and Virgil Widrich, a black and white surveillance scanner video facing the front door. Due to a deliberate twenty second delay, one’s surveillance isn’t immediately recognizable. No one expects their entrance in a gallery to kick off an exhibition about nature. But the 20 subsequent digital works don’t conform to traditional distinctions between “natural” and “artificial.” The “nature” presented here is bound up and integrated with artificial intelligence.

The first room includes video works that prominently feature plant-life, but don’t be fooled. Depicted simulations of foliage are the product of uncanny AI programs that manipulate plant imagery, most obviously John Gerrard’s riff on the Green Man, “Neural Exchange (Leaf Covered Figure)” (2017). Jennifer Steinkamp’s “Blind Eye” (2018) is a panoramic wall of animated birch trees cycling through the seasons. These animated programs work on self-directed algorithms built to mimic human brain processes and, presumably, reflect some improvisation and autonomy as a result. While these works pose interesting philosophical questions about plant consciousness, they also suggest a dynamic sympathy between plant and robotic processes.

Another example is “Eau de Jardin (Two Plants)” (2004) by Sommerer and Migonneau, which features two lush, green and hanging potted plants placed in front of a digital screen of unfolding computer-generated plant imagery that “grows” when interacting with visitors’ electromagnetic fields. The work references Claude Monet’s famous paintings of his water garden at Giverny, thus provoking us to reflect on the contrast between different epoch-relations to the natural world.

This AI entwinement points to the ongoing and (for anyone born before the 2000s) shocking reality that nothing is outside the purview of tech and human intrusion. A wall of 73 taillights disrupts the mirage of “nature” and greenery via Madeline Hollander’s installation “Heads/Tails: Walker and Broadway 4” (2020) that blink at various increments based on the data collected from driver behavior at a New York City intersection. Daniel Canoger’s wall-proportioned installation, “Rise/Times Square” (2015) features 1,200 figures crawling across the screen. The “duration infinite” reinforces the realization of the subject. Edited by a constantly adapting computer algorithm, the film illustrates how people also move (and potentially behave) like vines.

A note of geological healing is introduced by Thiago Rocha Pitta in “Danae in the Gardens of Gorgona or Nostalgia of Pangea” (2011), in which the camera follows honey as it’s poured across landscapes of Brazil and South Africa, as though to reseal the Mesozoic supercontinent of Pangea. Subsequent works in this second part of the show, like Pitta’s, situate the human in this discourse — our movements, our politics, our international trash. Guillermo Galindo’s “Waveform Coded Landscape” (2015) is essentially a musical score synthesizing data and sounds collected along border towns to create a “silent song” for the thousands of undocumented workers who have died trying to cross the Southern border.

The wall painting by Elias Sime, “FORTHCOMING 6” (2009-2010) is composed of discarded motherboards, bottlecaps, and computer wires purchased in an open-air market in the artist’s Ethiopian hometown — a nod to the waste these digital efforts create that is rooted in the mid-20th century assemblage tradition of Robert Rauschenberg, George Herms and many others.

Tying the show’s disparate parts together is a short film by Miguel Ángel Ríos, “Piedras Blancas (White Stones)” (2014). It follows a seemingly endless flow of 3,200 concrete grapefruit-sized balls flowing through and across a landscape with such urgency, such force, with an audio rumble like an earthquake, that whatever we are a part of — it is, like an auto-programmed algorithm, unstoppable.