I Was Here
Column by Bill Lasarow 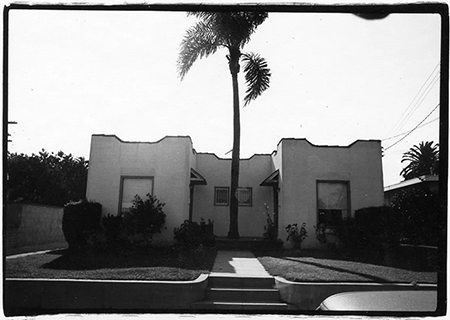 Only if you know Los Angeles will you be familiar with Beverlywood. It’s a post WW2 built neighborhood on the West Side nestled at the foot of but apart from Cheviot Hills. Everyone knows Beverly Hills and Hollywood, maybe also Bel Air. Not so much Cheviot Hills. Cheviot Hills was then and remains a high-end urban enclave that attracts marginal attention. Drive from Westwood to Culver City and you’ll brush up along its western edge without ever knowing it.

After she died recently, I joined the legions who dipped back into some of Joan Didion’s witty and stylish essays that transported me to the adolescent city that nurtured me. “Trouble in Lakewood” and “Slouching Towards Bethlehem” in particular drove me back to some of the artists who best evoked or observed the small-town über-sprawl and suburban glop that has aged surprisingly gracefully into the present international destination. A bunch of photographers branded L.A. as ordinary but exotic, depressing but dynamic. Judy Fiskin, John Divola, Larry Sultan and John Humble all seemed to start from the idea that the human dwelling was interesting primarily for its ordinariness, that its inhabitants were best suited to degrade any habitation until it no longer was. Many artists who made it their business to record buildings and houses outside of L.A. and the United States, most notably Bernd and Hilla Becher, developed a more formal aesthetic that makes me reflect on our evolving history. But among L.A.-centric artists of note, the accidental features and destruction left behind by property owners mainly transcended the general barrenness with that most universal of signatures: I Was Here. It placed the local culture in closer proximity to the drawings found in Cro-Magnon cave dwellings than the investment properties that celebrities and CEOs snap up and refurbish.

Me, I was in Beverlywood, and that was my particular world long before such aesthetic critiques would have remotely occurred to me. I had plenty of friends at school who lived in the glamor and upscale neighborhoods that rendered Beverlywood quaint. Bel Air, Beverly Hills, Brentwood, Westwood, most of all Cheviot Hills. I lived in a very comfortable home right across from my elementary school, two blocks from the front entrance. I believe it is common that families who buy near schools both love their children and cannot afford more expensive housing stock. For me that short walk to school amounted to a kid bonus. Most of the other kids had to leave earlier and work harder. I could pick and choose who I would walk with because so many kids on the tributary streets fed directly into our main stream. On top of that I loved my backyard. I never had any shortage of kids to play catch, caroms, hide and seek, shoot hoops with before heading inside to play board games. I was middle class royalty, and had no doubt that this was the way the world was.

The grownups positioned themselves according to a whole different set of criteria that I only barely glimpsed. In my dark bedroom I could pick up fragments of the conversations during adults-only dinner parties on certain weekends. Since you are probably a grown up yourself, I can pass on what for children lay beyond understanding. Suffice to say, I knew that I was privileged, and in my juvenile brain it was both normal and wonderful. My street and neighborhood were there as an act of nature; it never would have occurred to me that it was a built environment — and very recently at that. Many, not all, kids like me grew up expecting that the entire world was that way. Many would go on to try and make more of the world that way once we realized just how false that assumption was. I happily count myself among that crew. This is an optimistic subset of our culture, those who believe the benefits we enjoyed can be spread out further and further in the hope that there will come a day when we can say that no one is any longer left behind. The world may not be what we want, but the prospect of doing something, perhaps for decades, that gets us all a bit closer to that ideal is felt. Our general security produces both a patience and a longevity that is not generally bestowed. This was what the small town within the growing megalopolis meant for me.

This privileged childhood took place immediately after the most destructive war in history, and was built on a foundation of technology, most of which did not exist a mere century before. We were, in ways never previously available even to royal families, SO beyond the small worlds of our ancestors, our horizon line suddenly yet comfortably circling the globe. What we are still learning, given all the progress, is a genuine appreciation of what that entails (although recently we’ve been moving backwards towards barbarism). And yet we have lived under a common bond, given the range and diversity that our species enjoys. Our general success — humanity’s success — for all of the setbacks is reflected in this and is responsible for the rapidity of our social and technological evolution. Based on the cited-into-banality “accident of my birth” I was born into privilege. Many of you were as well. The question is more pressing now than I can ever recall, what justifies the privilege? How do we leverage such advantage so as to replicate and, perhaps eventually, universalize it? In answering this we also address the more personal declarative: I Was Here.