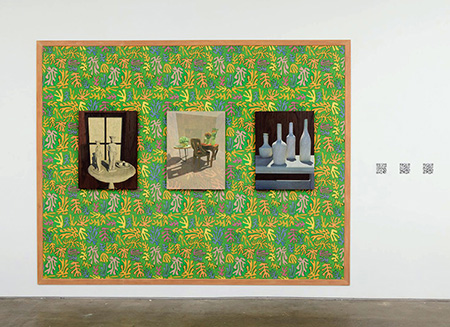 “Digital Combines,” a group exhibition curated by New York based artist Claudia Hart, takes as its point of departure Robert Rauschenberg's notion of the combine — a joining of disparate mediums (for Rauschenberg, painting and sculpture) into a single work. Hart updates the concept, bringing together physical objects with a digital counterpoint (an NFT in the form of an animation, jpg or sound file) accessed via a QR code that is displayed on the wall alongside the work, as well as in the checklist. QR codes have become the standard way of accessing supplemental content that is housed online. Scanning a QR code with the camera app on a cellphone reveals restaurant menus, checklists for exhibitions, and didactic panels in museums. In a well-informed article in the Los Angeles Times [https://www.latimes.com/entertainment-arts/newsletter/2022-01-22/essential-arts-qr-codes-in-museums-blessing-and-curse-essential-arts] about QR codes and art, Carolina Miranda discusses the positive and negative aspects of this technology as a digital access point and suggests that dependency on such technologies may even subtract from the experience of viewing the art.

In “Digital Combines,” as well as other recent exhibitions with prevalent QR codes, it is sometimes hard to know where to start. While there is a back and forth between what is on the walls and what is presented virtually, should either take precedent over the other? While Hart's premise was to "expand on the idea of an object by combining materials with things immaterial —whether a digital image, movie, sound or music," the digital augmentation is often just a jpeg file. As such it sometimes falls short of adding anything positive to the experience. Where the QR code offers a surprise, the Digital Combine is successful. Where it reveals a digital replica of the work on the wall, it is a disappointment.

Two animated GIF files complement Daniel Tempkin's paintings, “Right-Triangular Dither 15% Teal” and “Right-Triangular Dither 1, 68% Grey.” While the paintings are static geometric abstractions, the digital versions come alive with flickering movement that adds another layer of visual interest to the work. Tim Kent augments his oil on canvas, “Data Lake: Combine,” with a 5-minute mp3 sound file that juxtaposes electronic music and a computer-generated voiceover. Greta Louw's contribution is an audio recording about artificial intelligence and the end of nature that exposes the evils of technology. It nicely supplements her brightly colored digital tapestries, which are filled with animal and mythological imagery. The QR codes for Jakob Dwight, Sara Ludy and Claudia Hart lead to static jpgs that merely reproduce the works on the wall.

LoVid and Nancy Baker Cahill have been working with digital media for some time, exploring what can be done with augmented reality, as well as location mapping and animation. Here they have created Digital Combines where the two forms of work play off of and inform each other. Short videos that make elements within the paintings come alive are seen via the QR codes that accompany LoVid's two works. Quirky animations where two figures appear to embrace, dance or wrestle to the beat of an electronic pulse complement “MT Summer / Hugs on Tape #8” and “HugsCamera Skin / Hugs on Tape (Sky and Chelsea).” It is exciting to move between the animated and static iterations while taking note of how these different mediums and methods of presentation can change the aura of the work. Cahill's static images are moments or snapshots from the digital versions. Her mesmerizing invented landscapes “Slipstream 17 / Slipstream 17 (cinematic)” and “Slipstream 18 / Slipstream 18 (cinematic)” appear to be celestial wonders in bright hues that ebb and flow according to natural algorithms.

According to the gallery, Hart's first Digital Combine contract stipulated that the digital work could not be sold separately from the physical work and that they were "two halves of a singular whole." The idea was that the digital file (or NFT) holds the works metadata and creates a single conceptual object. Given that the NFT market exploded in 2021, it is now interesting to think about the physical and conceptual relationship between a work on the wall and a work that is immaterial, particularly with regard to Rauschenberg’s earlier model. When you purchase an NFT what do you get beyond a certificate of ownership? Hart's idea of a Digital Combine satisfies those who want both — a work for the wall and a digital manifestation that may or may not be worth something in the future.