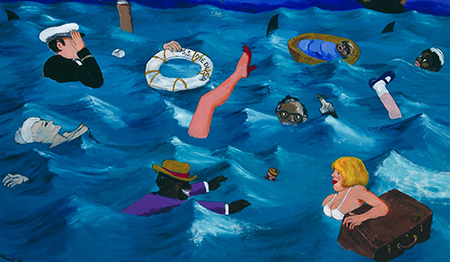 “If you decide to laugh, don’t forget the humor is the bait, and once you’ve bitten, you may have to do some serious chewing. The tears may come later.”

Although not in his usual cartoony style, Robert Colescott’s deadpan “Rejected Advertisement for Droste’s Chocolates” may be his most succinct and biting satirical image. The delicately rendered graphite drawing of ice skaters, from 1974, shows what appears to be the familiar couple from the Dutch cocoa box. They are a little older here but seemingly just as wholesome and pretty, gliding across the ice holding hands in an idealized Netherlandish winter-scape. Except, what’s this? She’s Black, and his pants are open. It’s classic Colescott, this insertion of race and sex into antiseptic white tropes.

The drawing is only one of many such commentaries in “Art and Race Matters: The Art of Robert Colescott.” More familiar, and more obvious, are his big cartoony paintings, full of funk and word- and image-play. Colescott, who was Black, paints child actor Shirley Temple (married name: Black) as a little Black girl accompanied by her obsequious sidekick Bill Robinson. Here, Black is Black and Robinson, who was Black, is white. Again and again, Colescott turns expectations inside out simply by changing the race of familiar figures. Would a little Black girl have been a movie star? Could the movie-going public have accepted a white man as her fawning sidekick? In another painting, Aunt Jemima wears the checkered headscarf from the pancake box, but here we see her from the neck down and it turns out she’s a sexy babe in a clingy miniskirt frying up flapjacks for a white cowboy.

The exhibition is the first comprehensive retrospective of the late artist’s work, and the through-line is race in America. Colescott produced much of this work the 1960s, ‘70s and ‘80s, and its uncomfortable humor came from introducing Black characters into white narratives at a time when that still shocked people. It’s a disarmingly simple device, and it is unfortunately nearly as powerful now as it was then. Swap out a Black person for a white one and you disrupt the Western world’s fragile Eurocentric view. (Think Obama, think Hamilton, think Serena Williams.)

Though he cultivated a coarse style, Colescott was academically trained and well-traveled. He studied with Fernand Léger in Paris, and lived in Egypt for six years. Earlier and later examples of his work show his range and elegant hand. He deployed this rougher style to make a point and was particularly irreverent when it came to European art history.

The send-ups of hallowed Old Master paintings wrap goofiness around venom. Théodore Géricault’s “The Raft of the Medusa” is reimagined as “The Wreckage of the Medusa,” a bunch of foolish people, both Black and white, bobbing around in the water after a shipwreck. Not one but two busty women float on their backs, the better to expose their breasts. The scene is more about swimming and sex than drowning or revolution, the style more influenced by R. Crumb than Gericault.

One of Colescott’s most striking art historical revisions dates from well before he adopted his jokey style, though. His reinterpretation of Manet’s “Olympia” contains no jokes, just the frank, equal blurring of the faces of both the white model and the Black servant behind her, a change from the original painting in which only the Black woman’s face is obscured. Equal representation, literally — that’s all it took to make this painting radical. Interestingly, neither female figure here is the object of the insouciant but persistent sexism that characterizes, and now dates, Colescott’s later work.

The show’s curators have attempted to explain this away, which seems a little silly. The man was born in Louisiana in 1924 and appears to have been as casually sexist as the average male artist of his generation. Wall text tries to convince us otherwise, stating that he was making bold statements not only about racism but also about the treatment of women. That’s a stretch. To claim that he was some kind of all-purpose reformer minimizes the truly radical statements he was making about race. The fact remains that the European art Colescott satirizes is also offensive for its objectification of women, which he does not satirize. This fact may complicate appreciation of this show. But I say, give the guy a break. He was a man of his times; nobody can get everything right. To try to posthumously pack all virtuous positions into one man’s work is to make him into a propagandist or a proselytizer, and Colescott was neither.

Oddly, some of the most beautiful work in the show, if not the most ideological, are the late abstractions, which employ some of the same visual strategies as the earlier crowd scenes. In these, Colescott drops the puns and cartoon clumsiness, not to mention the satire. These paintings made me think of the Willem de Kooning retrospective at MOMA a decade ago, where that artist’s late paintings were given nearly as much wall space as those from earlier periods. A few belonged there, to tell the full story, but it was a story of diminished powers and it felt like a sad ending (de Kooning suffered Alzheimer’s disease for at least ten years). Here the opposite is true, although Colescott also suffered from a neurological disease at the end of his life. His late paintings are beautiful. I wish more of the late work had been included, which led me to wonder if the story of Colescott’s career, if not the career itself, was cramped by the narrative he felt he needed to tell about race, as important as that narrative is, when he had other stories to tell as well — about beauty, for instance.