Barbara Kruger, “Thinking of You. I Mean Me. I Mean You.”
Los Angeles County Museum of Art (LACMA), Los Angeles, California
Review by Michael Shaw 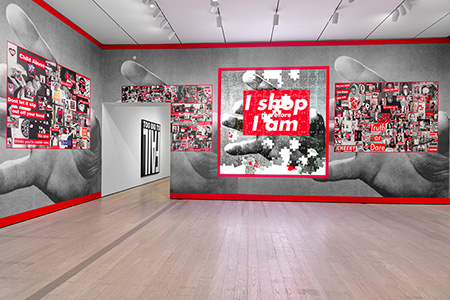 Barbara Kruger, installation view, “Thinking of You. I Mean Me. I Mean You.”, 2022, Los Angeles County Museum of Art. Photo courtesy of LACMA

Barbara Kruger’s powerful survey demands a lot of processing. Why is this more the case with her work than most? Is it because her use of language is so rigorous — and confrontational? Is it that the voice she’s manifested, which has remained steady over 35 years, makes us feel, on some level, as though we’re being reprimanded? Or is it that, decades before social media, and now with social media, the mirror that Kruger has been holding up to us is filled with an even more thoughtful and pointed version of our enveloping media landscape?

The power of language, and more specifically text, gives Kruger’s work a nearly unsurpassable omnipresence. Months before visiting the exhibition, I was seeing the show’s title — “Thinking of You. I Mean Me. I Mean You.” — manifested as an artwork unto itself, on social media, in press announcements, and then on banners and on a Hyundai IONIQ 5 (Hyundai is the exhibition’s main sponsor). The corrective mantra of the show’s title alludes to our collective tendency towards narcissism. We’re all implicated, although the former narcissist-in-chief does make a brief but well-timed appearance, hugging the American flag just before a lip-synching gray cat segues us into a red screen with a barrage of white text, following the word “Famous:” “actor…realtor…politician…thug…makeup applier…activist…doctor…guru…journalist…” etc. This is from Kruger’s 2020 three-channel video installation “Untitled (No Comment),” which encompasses everything from cats in toilet bowls, to a super-concise takedown of authoritarianism (inevitably implicating Trump again), to the typing out of a sycophantic letter in which the writer’s true feelings of disdain and animosity are quickly redacted by a fast-moving black bar.

Kruger’s videos are generally as strong as any of her quintessential text works, and comprise the funniest and most entertaining component of the show. Whether in “(No Comment)” (2020) or “The Globe Shrinks,” (2010) in which actors tell elaborate jokes, or we’re embedded into the driving experience of a man trailing a phone-distracted woman in an S.U.V. as she one-handedly swerves through one of L.A.’s canyon passes. Eventually the highly irritated driver gives her the finger and an “F-U,” in full-walled four-channel immersion.

“Thinking of You. I Mean Me. I Mean You.” affirms Kruger’s consistency and its ongoing relevance: more than a third of the works were made from the late ‘80s to early ‘90s and revised in the last few years, often as LED video panels with added exclamatory bells and whistles that ding or boom with each change of text. So one of her classics, “Untitled (Your body is a battleground),” featuring an appropriated image of a woman in split screen, the right half of her face a photo negative, morphing into “My body is money,” “Your body is a piece of fruit,” “My coffee is a motorboat,” “Your will is bought and sold,” “My beliefs are short and sweet,” and “Your humility is bullshit,” among others. It’s Kruger parodying Kruger, alternately raising the stakes or taking cues from refrigerator magnet poetry.

In “Untitled (That’s the way we do it)” (2011/2021), a wallpaper installation takes on Instagram culture by both confronting and absorbing it. Within multiple batches of what appear to be social media posts that have been Kruger-ed with her trademark red, black and white text graphics is a Ben-Day-dot-low-res photo of the artist herself, with the words “parody…is not…infringement.” Another wall features a grid of individuals, cropped between their necks and their waists, wearing Supreme t-shirts and the occasional skirt. Supreme is a skater brand that lifts its design sensibility from Kruger’s aesthetic lead, starting with its red box logo. It’s an ironic chapter in how the aesthetics of the former designer for Condé Nast publications has been appropriated back into popular culture, which is in turn re-appropriated back into the museum context.

As much as “Thinking of You. I Mean Me. I Mean You.” entertains, it also challenges — power structures, the languages of power and engagement, our own complicities. But its closing act doesn’t sit well. Near what functions as the end of the exhibition, a relatively small room, split in the middle by a towering wall of text, is Kruger’s installation “Picturing ‘Greatness,’” which in addition to the massive dogmatic includes thirty-odd black-and-white artist portraits from LACMA’s collection. The dogmatic reads, “Though many of these images exude a kind of well-tailored gentility, others feature the artist as a star-crossed Houdini with a beret on, a kooky middleman between God and the public. Vibrating with inspiration, yet oozing with all manner of refinement, almost all are male and almost all are white.” The text later continues, “… we are finally beginning to see the incremental inclusion of women and people of color into the mix: a reflection of the diverse races, genders and classes that define themselves as artists. As we tend to become who we are through a dense crush of allowances and denials, inclusions and absences, we can begin to see how approval is accorded through the languages of ‘greatness,’ that heady brew concocted with a slice of visual pleasure, a pinch of connoisseurship, a mention of myth and a dollop of money …”

Indeed, more than half of the artists included in this portrait gallery are women and/or people of color. But the grandiosity of the statement and the paired photographs are not at all in step. Why, then, didn’t Kruger include only women and/or people of color? In her effort to rewrite diversity and inclusion (and address the clichés of artist’s portraits) she’s simply exercising her own power to canonize without acknowledging any awareness of it. While an ambitious gesture — and we know who she’s thinking of — instead of an exclamation point, the wall text unfortunately muddies the overall tenor of the show.