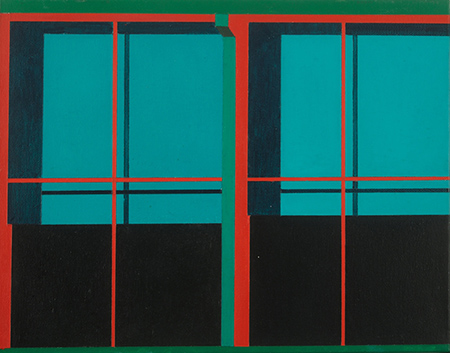 With more than 350 works of art spanning six decades, “Subversion and Spectacle” reflects Clark V. Fox’s ongoing critical perspective on consumer culture, politics, and American identity. Part Native American of Cherokee and Powhatan descent, Fox views American culture effectively as an outsider. Consequently, he does not depict historical figures like George Washington and Abraham Lincoln as heroes. Nor, for that matter, is the advertising icon, Mr. Peanut, who is a constant presence in his work.

One entire gallery is dedicated to Mr. Peanut, the mascot of Planters, a well-established American company. The familiar image of the anthropomorphic peanut with top hat, cane, white gloves and spats dates to the early 20th century. Fox has been using Mr. Peanut as a vehicle for ironic comments on consumer culture and capitalism since the 1970s. He surrounds the familiar peanut with dollar signs, skulls, images of President Washington and Chairman Mao, Native Americans, Chinese characters, and even an X-rated French phrase. According to the artist, “My Mr. Peanut paintings capture my disdain for war and the warmongering, profiting capitalists whose business profits from the death of the innocents.” After half a century, any painting that includes Mr. Peanut automatically references Fox’s disapproval of consumer culture and advertising.

Also included in the exhibition is an art car and six small abstract paintings representing Fox’s participation in the Washington Color School of Painting while studying for his BFA at the Corcoran School of Art. It was there he met James Harithas, founding director of the Station Museum and at that time director of the Corcoran Gallery of Art. Before that, Fox studied with a Japanese art master, spent one year at Pratt Institute, and even did part-time stints at Warhol’s Factory, which is reflected in the strain of Pop Art style in his work.

One wall holds a large arrangement of 24 George Washington portraits ranging from 1972 to 2012. The largest one, “Gigantic George,” is painted in what Fox refers to as his “divisionism” style, a version of pointillism he began using in the early 1970s. Another grouping in the show of “38 Lincolns” focuses attention on a broken treaty between the U.S. and the Dakota Nation. The 38 portraits represent the 38 Native Americans who were hung in 1862 after being convicted of raiding settlements in Minnesota when the U.S. fell behind in its payments to the tribe. President Lincoln declined to commute their sentences.

The large end wall of the museum is hung salon style with dozens of still lifes of single oranges titled “NAFTA Oranges.” Fox began painting oranges after the NAFTA (North American Free Trade Agreement, which included the U.S., Mexico, and Canada) treaty went into effect in 1994. According to the artist, it is a “tribute to the working-class peoples of Mexico.” The very first oranges he painted were those purchased on the side of the road from a Mexican national. Opposite the oranges are portraits of presidents Barak Obama and George W. Bush, Mexican president Benito Juarez, Chief Joseph, and Chief Red Cloud. The Native American images appearing throughout the show signify Fox’s belief that democracy does not exist in the U.S., and major social, economic, and political reforms are long overdue.

Another series included here are paintings of windows that Fox started in the 1970s. He has since created hundreds of window paintings from locations in Washington D.C., New York City, Los Angeles, and Paris. There are half a dozen early examples, as well as four freestanding, two-sided constructions that are essentially windows tagged with political messages. Also at that time, while living between Paris and New York, Fox became involved with Mail Art through his friendship with Ray Johnson. Examples of his early mail art are included in the show.

This extensive survey conveys the various identities, artistic styles, and influences on Fox in a lifetime spent expressing his critical feelings toward corrupt politicians and corporate greed and ruthlessness. He continues to use his artistic influence to advocate the cause of justice and equality for all.