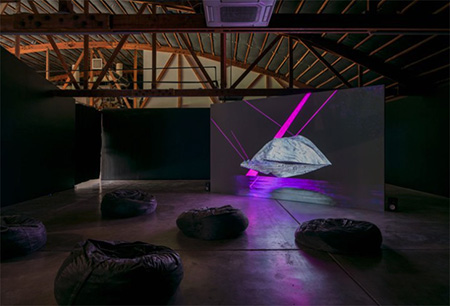 In place of its sprawling pre-pandemic biennial, the Oregon Contemporary (formerly Disjecta) has commenced the more focused but still ambitious Site, a program of three exhibitions featuring Oregon artists. The current show is the second in this debut series. Curated by Ashley Stull Meyers, “PEAKING” is a site-specific installation by sound and video artist Rick Silva, associate professor of art and technology at the University of Oregon, Eugene. That’s an apt specialization, because art and technology commingle in his work with an overarching focus on natural forms and the broader landscape.

Silva considers how human beings impact nature, not in pedantic, polemical, or overtly political terms, but with a lyricism and sense of enigma that somehow merges high romanticism with futurism. This enveloping of topical concerns within a mantle of visual poetry has proved resonant with art lovers worldwide; the Brazilian-American artist has exhibited widely throughout the Americas, Europe, and Asia in venues such as the Centre Pompidou and Whitney Museum of American Art. Silva’s vision has struck a chord in an era when the technological and the natural are generally seen as oppositional, if not adversarial.

The conceptual seeds of “PEAKING” can be seen in the artist’s earlier projects. In “Geomancer” (2019-21), a series of 14 short videos and interactive 3D schemata, Silva has superimposed plasticine, neon-colored shapes atop mossy boulder forms, which split in two to reveal radioactive-looking innards. “Western Fronts” (2018) projects triangles, circles, and rectangles over smoothly unfurling aerial videography of desert scenery, set to an eerie electronic soundtrack, an effect coolly Kubrickian in its eye-of-God perspective and air of sinister inscrutability. This was preceded by a 2014 series in which delicate computer-animated birds fly through moving geometric planes. In each of these works, inanimate objects or animals interpenetrate mysterious geometries.

Following in this direct lineage, “PEAKING” advances Silva’s syntax and themes, expanding them to a scale literally unprecedented in his output; this is physically the largest installation he has undertaken to date. Scored to electronic music of his own composition, the 25-minute video projection begins in earnest on an immense screen in the soaring main gallery, with its cathedral-like vaulted ceiling and crisscrossing support beams. The darkened room is appointed with five beanbags for viewers to recline upon as they take in the images and the uncanny ambiance. In a half-dozen distinct sections, computer-generated mountains slowly revolve, enveloped by inky blackness, shot through with periodic laser beams, the frequency of light-play and background effects gradually growing more complex and frenetic. Essentially, the sequence progresses from largo to allegro agitato to prestissimo and is apt to induce a mélange of vertigo and anxiety, comfy beanbags notwithstanding.

It’s attention-grabbing, to be sure, but what does it mean? An illuminated side panel called “PEAKING INDEX” provides a legend, explaining the work’s visual language. The mountains are apparently modeled on the Cascade Range of the Pacific Northwest, although by the looks of them they could be anywhere. Based on the interaction of more than a million digital variables within the video’s programming, the inexorable ramping-up of visual distortion is analogous to the metastasis of technology intruding into the natural world, akin to an exponential curve on a graph. The manic motion and light-play assault the mountain at the climax — that is, its peak, ergo the double meaning of the exhibition’s title.

From calming serenity to blinking, strobing, spinning bedlam, it charts a trajectory over the past 200 years from eras pre-industrial to industrial to Space Age to digital. Perhaps this is why it feels familiar: It’s what our lives have become. As a retinal experience, it inspires disorientation and identification in equal measure. Its frazzled feel and information overload are our own. Engaging if willfully arcane, Silva’s phantasmagoria invites us to read as much of this sociocultural context into its kaleidoscopic maelstrom as we’re compelled to, even while allowing us simply to stand agog and googly-eyed, awash in dystopian spectacle.