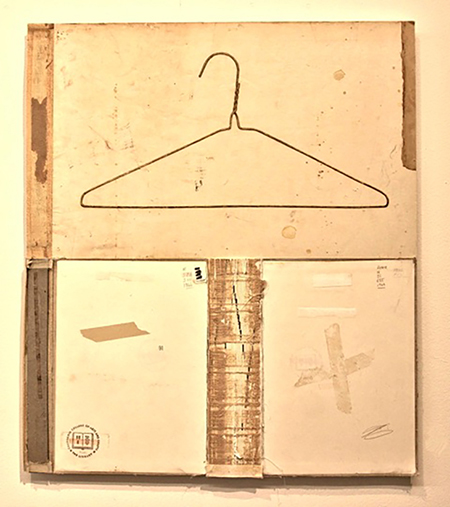 The puritanical taboo against mimesis, or imitation, is thankfully no longer in fashion in the art world. Even at the height of The Age of Theory it made no more sense than the proscriptions against figurative art in the Jewish, Islamic, or Protestant Reformation traditions. As Willem de Kooning said to Philip Guston after leaving a reception of uninteresting art, “We don’t have to think about that anymore.”

Actually, the imitation of (and improvement on) observed reality is both an ancient and magical property of art. Three Bay Area artists who employ illusionism to powerful effect are featured in “Found Object Facsimile.” Daniel McClain’s mixed-media drawings on deconstructed books, Claudia Tarantino’s exquisite sculptural still lifes in porcelain, and Bill Abright’s Surrealist ceramic/mixed media birds not only fool the eye with their brilliantly deceptive evocations of found materials, but also delight us with their wit and charm. Trompe-l’oeil, meet trompe-l’esprit. Fool the eye, trick the brain, but benignly so.

McClain’s mixed-media wall assemblages, splayed hardbound books — library castoffs, judging by the old-school buckram bindings — with the spine stitching serving as hinges, evoke an imaginary past. They suggest crumbling, dilapidated buildings; age-spotted papers stained with glue streaks; handwritten annotations of no obvious meaning; scrupulously rendered photographic illustrations of everyday items such as a dirty band-aid, a rubber glove, a coffee mug, pressed Lunaria silver dollar leaves, a coat hanger, a pair of ears, a group of worn pencils. There is mystery and memory inherent in the banal, acutely visible to the poetic visionary. Such is McClain’s delight in artifice, in recreating artifacts. In “Magic Johnson” he duplicates the cards that library patrons used to sign to borrow books, including the date stamps and the card pocket, all hand-rendered in pencil, ink and watercolor.

Tarantino’s five small porcelain sculptures evoke the past as well, but the containers and ephemera that she fabricates attentively and even lovingly then stacks together in ensembles derive from family history and memory. She writes: “Hard or soft, textured or smooth, thick or translucent, porcelain as a material allows me to indulge my fascination with surfaces that reflect the patina of time and imply a story …. Boxes of “stuff” collected and saved … link us to the past. We save them, forget them and rediscover them.” “Five Stories” is a ziggurat of five cookie tins and thread spools. The title suggests architecture, but also the narratives associated with these mementos — all duplicates of the originals, of course. “The Three Graces” may have a similar double meaning in its title, with its stacked hatbox, shoebox and photo album bedecked with buttons, a rubber band, crusts of Italian almond pastry, and two faded photographs depicting a trio of women — perhaps all named Grazia, or Grace?

Abright’s composite birds and fish marry natural history, the environment, and Surrealist fantasy. They are three-dimensional ceramic animal versions of Giuseppe Arcimboldo’s portrait heads of fish and vegetables, Chirico’s metaphysical mannequins, Max Ernst’s frottages, and the stick-construction horses of Deborah Butterfield. Abright: “From mechanical objects to found animal specimens, I investigate their interiors and reveal the inside of things.” Animals and humans are vessels of consciousness, so Abright’s deconstructions of animal forms (derived from taxidermy molds) are clearly constructs and artifices that despite their ramshackle nature retain the vivacity and personality of their nonhuman models. “Sheltering in Place” depicts a crow hollowed into segments that suggest seashells, contained by what appear to be red twigs. The title reflects the sense of entrapment we have all felt for the past two years. “Absarokee” (named for a town in Montana), “Flicker,” “Pecker,” and “Redline” are — to borrow a title from the ornithophile Max Ernst — “Monuments to the Birds.”

All three artists, through their dedication to material and craftsmanship, create objects charged with poetic feeling. Not so long ago some theorists asserted that art could never match real life and was doomed to failure. “Found Object Facsimile” demonstrates that aesthetically conceived simulacra can be distillations of life that are as good as or better than the real thing.