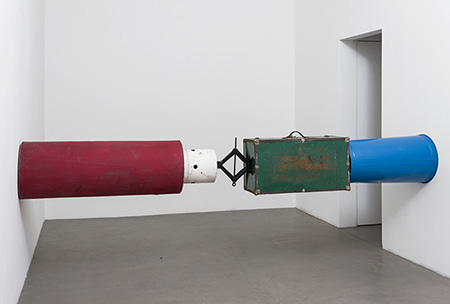 “The title of the exhibition [“Off-Kilter”—Ed.] is taken from an installation produced in San Francisco, circa 1984, by Taiwanese conceptual artist, Gigi Janchang (now living in Copenhagen). After carefully measuring the gallery Janchang discovered the gallery was off square by nearly six inches. Rather than ignoring or fighting the peculiarities of the architecture, she made it the subject of her work. She created an illusionary ‘true’ space by lining it with carpenters (sic) levels along the floor and ceiling. She also hung plumb bobs to establish true vertical. When presented with the evidence of the levels and bobs, viewers perceived the space as square and Janchang’s correction as off-kilter.”

This explanatory text is a great point of departure for this eponymously titled group show, which deftly bobs and weaves its way into a gratifying response to a vintage chapter of conceptual art history. One would be hard-pressed to find a more suitable venue for “Off-Kilter” than the galley’s unique horseshoe layout of multiple spaces in which it’s installed.

Janchang herself is included with her 2022 version of “Off-Kilter,” 15 four-foot yellow levels that wrap around the upper walls of one of the rooms, a smaller space that also includes one of the show’s two strongest works, Bjorn Copeland’s “Horizontal RGB.” His trio of found objects — an old and worn green footlocker, a blue trashcan, and an unidentifiable red-and-white totem-like object resembling a pedestal — all stretch wall-to-wall through the minimalist engineering of a vintage car jack in the middle that provides their gravity defying presence. Not only is it a contemporary manifestation of Duchampism, there’s also an extra dose of whimsy in its diversionary and relational aesthetics. Copeland has taken direct advantage of the gallery’s odd configuration, forcing us to turn back and go the other way around the horseshoe if we wish to see the remaining works.

The other offerings mostly adhere to a funky but more-or-less elegant sensibility that curator Bob Linder has expertly cultivated. The show is mercifully light on big names, the modest exceptions being Julia Wachtel, whose 128-inch-wide painting from 2017 is a much more palatable take on her pop-culture-meets-cartoony figuration style; and Salomon Huerta, who contributes a still life painting with lemons and a revolver. A dye-sublimation photo print of a pair of Cocoa Puffs towers rising from what appears to be a frying pan (dubbed “Couple, November 12, 2019”) is by Otto Gillen, a veteran of the 2017 Whitney Biennial, though I had not previously encountered his work.

Two other audacious pieces accompany “Couple” in the same room: Davina Semo’s “Pulse” and Ashton Hudgins’s “267 Clifton Pl, Apt 5, Brooklyn, NY 11216.” “Pulse” initially comes across as a rather straightforward piece of wall sculpture-cum-installation: a grouping of six interlocking Xs, which simultaneously make a series of double chevrons and can also be read, per the title, as the pattern of a human pulse (and its upside-down reflection). Pink powder-coated galvanized steel oval chains, each roughly the size of rock-climbing carabiners, are affixed to the wall with pink steel nails. There’s substantial labor inherent in such a piece, and yet, before you reflect on that, you’re confronted with its funkiness … it’s off-kilter-ness. When you leave the in-person experience, you realize that it may also slyly be giving the finger to minimalism.

Hudgins, meanwhile, nearly steals the show with a simple-yet-complicated tableau, in which he presumably recreates a current or former residence. Rough-cut pieces of drywall are lined on the interior with the fronts, backs and sides of vibrant cereal boxes. In case this gesture alone isn’t already charming enough, its cryptic punchline (read closely the list of materials) is a “used rodent euthanasia chamber,” an eerie plexiglass box set in the middle of what may have been Hudgins’s bedroom. Another ingenious element of the piece, which admittedly I didn’t catch while viewing the show at the gallery, is a pair of upside-down white replica Eames chairs that serve as the apartment tableau’s base.

Group shows are often highly forgettable affairs, but not this one. I hope “Off-Kilter” stays with me. Though thanks in large part to a car-jack sculpture and a replicated apartment combining drywall, cereal boxes, and a rodent euthanasia chamber, it’s hard to imagine that it won’t.