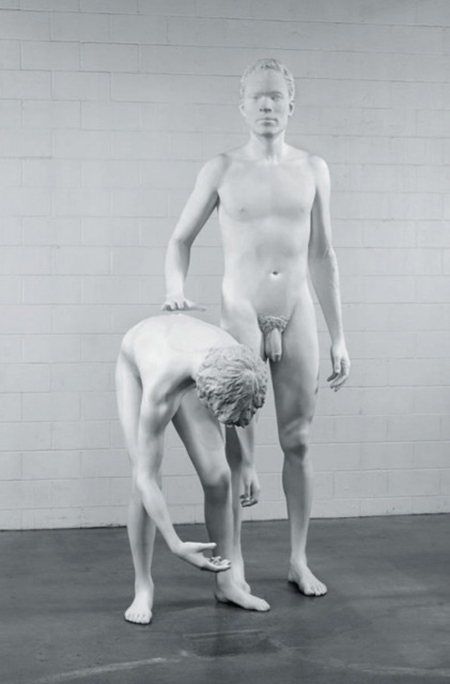 If political culture in 2015 as practiced by a number of ostensibly qualified adults makes you question whether western civilization is in decline, take heart: election day 2016 is only a year off, so there’s still plenty of time to shop for the angriest, most heartless candidate, the charismatic monster from the fearful, odious corner of the American id, the one who’ll make it all right even if the last messiah proved to be a dud. As the new sculpture by Deborah Kass, a tribute to Ed Ruscha’s 1962 “OOF” painting reads, from Brooklyn as one gazes toward Manhattan: “OY” (and from Manhattan looking towards Brooklyn, “YO”).

Art critic Jerry Saltz recently opined on the Whitney Museum’s decision not to acquire a work by Charles Ray that depicts, in Greco-Roman white (actually painted cast fiberglass), the oversized figures of a black man and a white boy titled “Huck and Jim,” after Mark Twain’s classic satirical novel about frontier life — including racism, of course, as Jim is an escaped slave and Huck is his complicit teen master, also escaping bondage, but of a more genteel, respectable sort. Saltz excoriates the Whitney’s timid administrators for their refusal to place an ostensible denunciation of America’s enduring racism in the plaza in front of the building. Saltz concludes that the work offers "No palliative parable or moral. Just the bare facts. This is a glyph for the complexities of reality. Twain’s tale was set in 1853; Ray's story is set in an eternal present and is nonfiction.” Had “Huck and Jim” been installed as originally intended it would have served as the museum’s public symbol, thus causing "non-museum going visitors" to add a racial subtext to every artwork within MOMA's hallowed walls, if, indeed, they make it that far past the provocation.

I do not accept the greatness of this sculpture nor the Museum’s culpability. The notion that sculpture or art may embody ‘improving’ moral lessons was a beloved theory of tastemakers of the nineteenth century, but discredited by the modernists of the twentieth. It is back today, but refracted through postmodernist cultural critique, not the old clenched fists of Social Realism. A couple of examples of art making dubious claims to intellectual honesty and aesthetic power, respectively, come to mind.

Hiram Powers’ virtuosic marble sculpture, “The Greek Slave,” is a wonderful Neo-classic work replete with the classical profile of the straight nose and broad brow forming a single plane. Unfortunately its purported denunciation of slavery is pallid, indeed: she is as calm and radiant as any of the Venuses of yore on which she is patterned; and the marble flesh is imbued with the sensuality that Bernini infused into his nymphs and saints. Wealthy Victorians who admired Powers’ figure were not, it’s safe to say, supremely interested in stoicism and perseverance in the face of adversity, let alone the eternal threat of the new American republic going decadent like Old Europe. The work, despite the chains fastened on the nude’s wrists, succeeds as art — but not as morals or politics.

The other piece is George Segal’s “The Holocaust,” a scene of ghostly white figures set within a fenced concrete enclosure at the Legion of Honor in San Francisco. Nobody can doubt Segal’s seriousness in this piece, but the effect of the piece, with piles of bodies in the ground, and one lone survivor gazing out through the wire fence, is all wrong. Located overlooking one of the most scenic views in the world, the Golden Gate, and perpetually surrounded by pedestrians, cars, and bicyclists, the figure becomes not the harrowing emotional experience that it should be, but a kind of ersatz pseudo-experience. OK, deplorable (“Nazis! I hate those guys!”); now on to the Glories of This or That. Wait, is that a DiSuvero in the parklng lot? That toppled tripod thing over there. It's tragic that they refused to place the Richard Serra there — he’s from San Francisco!

Ray may have felt that he was denouncing racism in the U.S. just as Bernini thought he was defending Catholic orthodoxy with his softcore “St. Teresa in Ecstasy,” but artists can sometimes be wrong about their gifts, and possibly never more so than when they’re trying to fulfill the best intentions of some Procrustean political program. The fact that we Americans have built a culture of complaint, skeptical of authority but prey to superstition, bodes ill for both art and politics. Snap out of it, folks. After the USSR folded, we had such a surge of capitalist/imperialist hubris that we assumed that American democracy was literally foolproof. History will judge us, and not kindly, if we continue the present path as though it were business as usual.