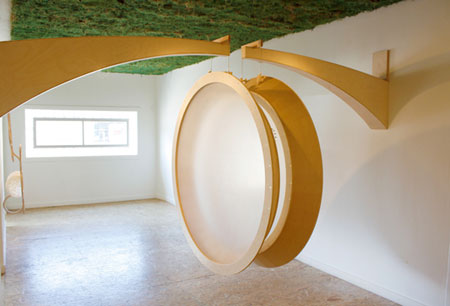 Mike Meyers and Yvette Molina are shown together under the unifying title “Circlesaints,” which nicely compresses Molina’s interest in natural cycles with Meyers’ mechanical interests. In this context they combine their vision of the earth as a gigantic and holy machine that we tiny putterers should take care not to mess up. Molina praises plants as agents of change and rejuvenation, tasked with keeping the planet breathing: “relentlessly persistent actors in the visible and invisible forces that shape our world ... quiet bearers of our food, medicine and shelter.” They are depicted as saintly, even, in their unobtrusive do-gooding. Her paintings on circular convex aluminum panels read partly as landscapes and partly as abstraction of those forces.

One standout work is the large “Akashic Recorders,” with its explosive burst of yellow light above an alpine landscape - a merger of Caspar David Friedrich’s divinity-in-nature and Matthias Grunewald’s ecstatic vision of an otherworldly Christ risen. Akashic records pertain, in Theosophy, to universal history recorded on a psychic plane. Meyers’ large sculpture, “Drumscape,” creates a similar impact. A pair of finely crated wooden rims stretched with plastic membranes studded with bells, it suggests some mechanical gong, tambourine, a prayer wheel that’s also a model of the cosmos. “Fast and Bulbous” resembles an abstracted, stylized yelling head, a fitting symbol of our furious, intemperate times.