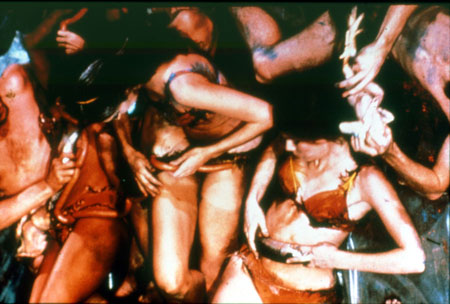 Carolee Schneemann is well known as a feminist artist and pioneer of performance art. Throughout her career she has used her own nude body as a central element in performances to reference physicality and to explore issues of sexuality, desire, gender, and unexpected movement. Schneemann’s works — whether paintings, photographs or film — are visceral and often use blood and a certain gestural sloppiness that relates to issues like death, illness, lust, and mortality. This exhibit includes works that span more than more than forty years, from 1959-2010.

Schneemann began as a painter, but is best known for her performance of “Interior Scroll,” in which she pulled a paper scroll from her vagina and while fully nude read its text to a live audience. The exhibit features both photos of the performance, as well as the (now laminated) scroll itself. Displayed in a zigzag accordion fold so that the text is not easy to read, we glimpse a few legible phrases: “personal clutter,” “attention to,” “gender”, “you are older,” “told me he had lived.” Delivered in strategic snippets, the emotional content of both word and image resonates with a nearby collage that seems to be about painful romantic relationships.

Two pieces are bookends to another sort of pain. In one the artist mourns her cat, Vespers, who died of leukemia. A funerary case contains photos of the cat’s bleeding ears, and the pale nightgown the artist wore, stained with Vesper’s blood. An earlier wall of photographs titled “Infinity Kisses II” (1981-1988) shows smeary and intimate images of the cat kissing the artist’s mouth over and over again. The feline’s paws are on either side of the artist’s neck, her toes are splayed, and her neck reaches out. One can see the intensity of feeling between cat and human: the artist puckers up and the cat puts its mouth to Schneemann’s. This series documents a strong emotional connection - recorded in clear human gestures - between cat and woman.

Schneeman’s early oil paintings feel heavily influenced by Abstract Expressionism, with swirling lines, intense pinks, and mint greens reminiscent of de Kooning. One striking 1958 piece, “Portrait of Jane Brakhage” is a pastel rendering of a nude woman’s curves. The angles of her arms, hips, and breasts are repeated in many, many later photographs of the artist herself, as well as in the most iconic piece in the show, “Meat Joy.”

Dating from 1964, “Meat Joy” is a performance piece featuring a small group of men and women in bikinis. Beginning with careful choreography shot from above, the men move the women’s bodies around in patterns that look like floor-based synchronized swimming. As the video unspools, the movement becomes sloppier and more playful, and instead of touching just feet and hands, the men and women begin to interact more loosely, in full-body embraces. There is a clear erotic charge here as well, which turns joyful when raw meat is added as a messy, paint-like prop. The dancers are soon smeared with blood and in turn smear each other’s bodies as well. The video grows abstract, and more beautiful, when the movement is stopped in still frame and the lighting goes pink, turning the graceful angles of nearly nude bodies into painterly figures.