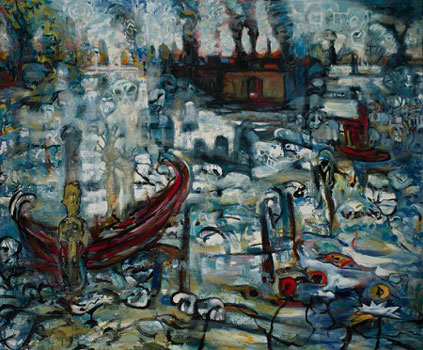 “Tides of Memory” is a fittingly ambiguous title for Michael Roque Collins’ paintings. Rich with a density of form and color, Roque Collins’ land and seascapes have a hallucinatory vibrancy that gravitates between the literal and the imaginative. The exhibition title suggests that his subjects — bridges, courtyards, rivers, boats on lakes — are physical places as seen through the metamorphic filter of memory, through which they are transformed into something dream-like, familiar and yet strange.

Some paintings, like his “Drifting Near the Island of the Mausoleum” and “Bridge Beyond the Lake of Fire” comprise ghostly imagery painted with a shimmering touch and, though the viewer can interpret their meaning for themselves, they seem allegorical, if not based on actual events. Roque Collins grew up along the Gulf Coast, and his visionary paintings seem touched with the intensity of the horror, as well the post-storm calm, of an oft-ravaged land.