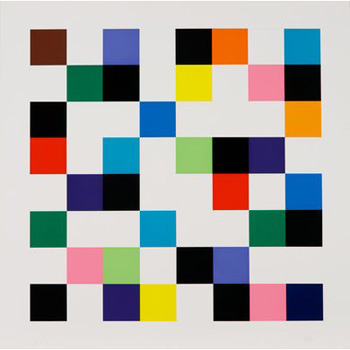 The work of Ellsworth Kelly somehow fights with the rhetorical framework of a written review. Any formal verbal description is bound to sound repetitive: one after another of intensely colored half arcs or subtle variations on the theme set against equally well calibrated fields of color (“Red/Blue, Untitled,” 1964), or grids made from multi-hued squares able to reference both Euclidian axes and some whimsical patchwork (“Colors on a Grid,” 1976).

This is indeed the visual vocab in “Ellsworth Kelly: Prints and Paintings,” comprised of some 100 of the artist’s most remarkable lithographic work, prints and several major paintings drawn from international private and public lenders.

There have been numerous tomes written on Kelly’s simple monochrome geometries, as well as his masterful line drawings of abstract shapes and flora. Excellent examples of all these genres are included here, indicating work that’s less about paint vs. print, or abstract vs. figurative, and more about Kelly’s innate understanding of line, plane, color, depicted and actual space – to the extent that the arc in “Blue Curve III” (1972) or the swell of the tiny fruit in “Suite of Plant Lithographs: Lemon (Citron)” (1964-65) appear done in one technically exacting, poetically compelling stroke. That is the other Kelly conundrum that must be seen to be fully grasped: it looks so simple and is anything but.

The emphasis for this venue is on printed work, a specialty of Kelly’s, whose lithographs build dense, velvety surfaces, tactile as any brushed pigment and sensual as moss on rock. Seen en masse like this, you might conclude that lithography and printing in general are neither minor nor adjunct, but artforms both influencing Kelly’s painting and, conversely, drawing inspiration, inquiry and the spirit of experimentation from the so-called major creative production.

What you confront uniquely in the presence of any Kelly abstraction is a humanity able to thwart the brittleness, remove and the self conscious purity of much geometric art. One comes away with a sense that despite art pundits, and Greenberg-be-foiled, post painterly abstraction is far from pure. In Kelly’s hands it is human. It vibrates and grabs at us in the gut, eye and in the head all at once. You must stand in front of this work and experience it; no review or reproduction can quite convey what it does.

That a kind of live breath finds its way into these hard edges is something I became aware of in a mid-2000 interview with Kelly. I expected to encounter some heady Stella-Judd rap; a mention of platonic forms and perceptual theory. Instead I had a conversation with a gracious and erudite man who more often indicated that common things — an expanse of yellow wildflowers glimpsed while driving, the curve of woman’s calf — were the genesis for a his eventually rigorous investigations of colored shape.

This excellent exhibition – the first major overview in almost thirty years — reminds us of Kelly’s prodigious print practice. By tossing in a few very major paintings in the final gallery as a culminating compare-contrast, the display asks us to consider issues and concepts moving between the graphic work and the painted media. That Kelly is able to achieve depth, clarity, incisive line, incandescent-to-decorator chip color, a sense of rigorous system and playful chance both in paint and unforgiving lithography, testifies to his dogged precision and the more than forty year relationship he’s built with some of the most gifted international printers, including our local Gemini G.E.L.