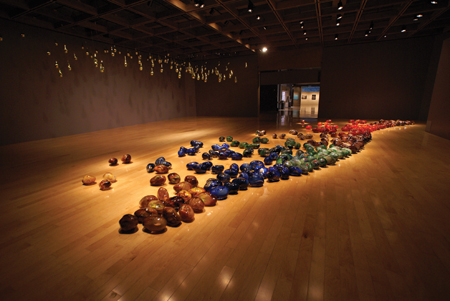 An American based for decades in London, Michael Petry is best known as author and editor of several books on contemporary art practice, and as the director of MOCA London. This first major exhibition in the US should establish Petry stateside as a bold and poetic multi-mediaist --one with several intertwined agendas he drives home with equal doses of elegance, erudition, wit, metaphorical flourish, and, above all, sheer beauty.

Petry employs disparate media with a brio that masks his deliberateness. He produces digital photography--downloaded from Internet-sourced images--with careful, meaningful emphasis on the images' technically sub-par quality. He masterminds a sound installation, a room-filling vocal chorus singing a text, for maximum (and minimum) sonic impact. He has fabricated two spatial installations out of glass, exploiting the translucency of the medium to glorious effect (and, not incidentally, addressing the museum's deep interest in the contemporary glass movement). In those two installations, Petry further embeds references to Old Testament account and Greek mythology, prompting the story of Joshua and the Battle of Jericho to mirror the story of Danae and the Golden Shower. The 100 yellow teardrops embodying the latter hang over the 250 glass stones representing the former, to comprise a stunning array of color interactions.

Joshua D's Wall, produced for this show, references Palm Springs not only in its dependence on glass, but in its conscious resemblance to the stones scattered throughout (and inspiring the Biblical name for) nearby Joshua Tree National Park. Golden Rain, realized originally for a show in Norway, also appears here with a pointed site-specificity, as do several non-installational works (whose presence fleshes out a kind of background to Petry's oeuvre). As proud of, and devoted to, his gay cultural activism as he is of his artistic and art-historic accomplishments, Petry has long invested his artwork with queer-centric associations, ones well appreciated by Palm Springs' large and august gay community. Certain of the works on view, in fact, contain and depend on deeply coded homosocial iconography. For its part, Golden Rain does not depend on such reference to work as a narrative structure, but its conceptual genesis does contain such encoding at its heart.

Petry's overall accomplishment in "The Touch of the Oracle" is to provide universal experience conveyed in the language(s) of spectacularly fashioned objects and images. These objects and images may also be driven by more intimate short-hands allowing certain viewers access to multiple meanings. But they exclude no one from their mytho-poetic as well as purely aesthetic pleasures.