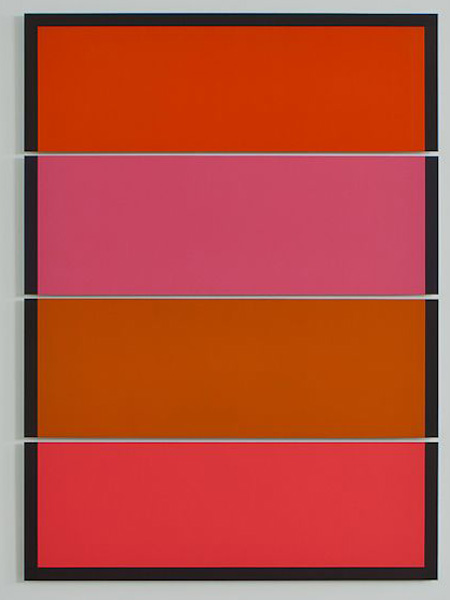 This selection of new paintings by Winston Roeth is modest in number but sublime and enchanting in effect. Mounted on thin Dibond grounds, the works are exquisitely delicate and appear synthetic — rarely are traces of the brush visible. Roeth makes paintings that involve only a few colors, but which are deployed to attain a dramatic intensity. Dominated by a single, bold color and often framed by a contrasting one, the works are confidently minimal. The turquoise color in "Blue Green Space Painting," for example, is surrounded by a band of fuchsia, adding an unexpected intensity to the composition.

Previous series have been densely textural, their surfaces thick with matte layers of paint. I prefer the clean luminosity of the works in this exhibition, exemplified by "Split Decision," with its pristine layers of alternating oranges and pinks. The color is explicit, even confrontational in its impact. Using subtle gradations in one work and emphasizing bolder colors and tones in the next  demonstrates Roeth's range as a colorist. In "Portrait in Transparent Orange" a bronze band surrounds a wash of mellow marigold. Textures emerge and shift as ambient light and the viewer’s physical perspective change. Roeth’s paintings aren’t psychological or nuanced; he goes for the gut with straightforward compositions that beautifully advocate for pared down, pure color arrangements.