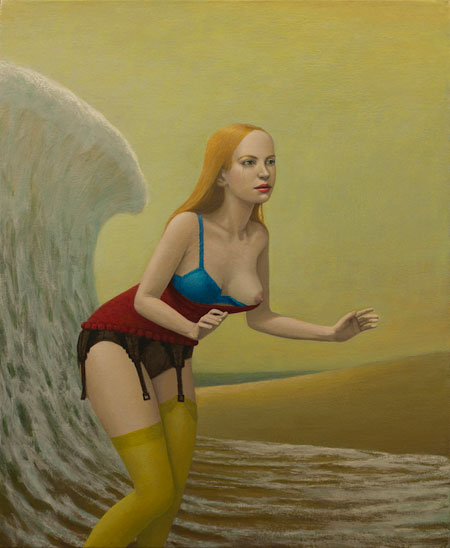 John Tarahteeff’s California upbringing is evidenced in his latest body of paintings, many of which take place by the seaside or feature marine motifs. Replete with surrealistic elements and implausible circumstances, Tarahteeff nevertheless works in a modern, distinctively figurative vein, where the human body is of paramount visual concern. Though Tarahteeff wants his paintings to be decipherable for their individual figures and settings, he has said he also strives for “an underlying tension, an improbability that keeps the illusion fresh over the long course of its making."

Tarahteeff often paints curvy beauties in various states of undress. The golden-haired woman in "Playing in the Surf," with her alabaster skin and delicate toes and fingers, is reminiscent of John Currin’s fleshy, ripe nudes — an impression exacerbated by the exposure of a milky white breast, released from a triangle of the figure’s turquoise bikini top. A wave hovers above her, not menacingly, but protectively, like an outspread wing. Other paintings are less provocative. In the modestly sized "The Game," a happy yellow dog is pictured leaping across green grass, an orange bird flying above him and a bright shoreline in the distance. Tarahteeff’s latest works are meditative, very much contemporary paintings that tell as much or as little of a story as you desire.