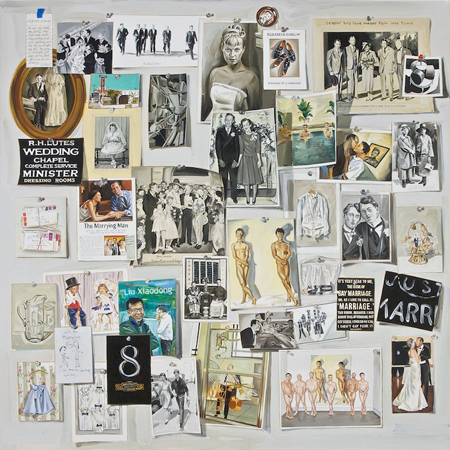 The day after the Supreme Court’s momentous decisions on gay marriage Donald Bradford’s show, “Love and War,” looked both prescient and fortuitous. Comprising twenty-two oil paintings based on found imagery, the show operates as an installation rather than as a collection of disparate works (although the oils, mostly medium-sized, are painted with such bravura as to function just fine on their own). Bradford, a San Francisco artist and teacher, grew up as part of family that operated and still operates a 24-hour wedding chapel that also served as their residence, so his interest in matrimony is understandable.

His interest in war also makes sense in this context though, mercifully, the bulk of the show is about coming together rather than blowing apart. The "Discarded Love Letters" paintings derive from handwritten letters of WW2 vintage that Bradford found in a dumpster. Fascinated, he painted them both as stacks of envelopes tied together with ribbons (a war bride’s keepsake) and as painted letters, studies in calligraphy that happen to be poignantly readable. The "Bulletin Board" series are large paintings of the artist’s bulletin boards, pinned with images from newspapers and magazines on the connubial theme, ranging from the wedding of Claudette Colbert and the marriage of Gavin Newsom (a champion of gay marriage as San Francisco’s mayor back in 2004), to photos of bride-and-groom figurines, to Duchamp’s coffee grinders (Bachelors, stop grinding your own beans.). Oh, happy day!