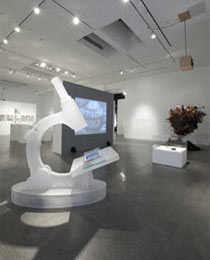 A common misconception is that only humans use tools. Actually, several other species--apes, sea otters, and various birds, among them--employ naturally occurring stones and sticks as tools. Indeed, some monkeys and even some birds (including a New Caledonian Crow named Betty [!]) go the step further to construct tools from multiple found objects. Perhaps the distinction lies in the fact that humans are the only ones who use tools to fabricate other tools.

Whether tools make us unique or not, they tell intriguing stories about our history. Artist/writer John O’Brien and curator Stephen Nowlin have assembled a provocative group of tools in an exhibition that generously displays functional and non-functional material culture. Contrasting objects created for purely utilitarian purposes with objects and images conceived aesthetically, they present a nostalgic perspective on the history of tools and those visual artists who are beguiled by that history.

Nowlin and O’Brien mined various California institutions to collect historic artifacts for the exhibition. Nearby the California Institute of Technology (Caltech) contributes three large graphite drawings by Russell W. Porter; the one from 1939 is a cut-away imagining of a 200-inch telescope. A large group of hand tools dated 1850 to 1945 was contributed by C.S. “Bud” Bolt, founder of Bolts Antique Tool Museum in Oroville, California. (Come on! Did you know such a museum existed?!) The Huntington Library gave them several pages from the Illustrated Catalogue of Machinery and Machinists’ Tools. Dated 1872, the pages recall the work of El Lissitzky and other avant-garde artists of the early twentieth century. The Autry National Center of the Museum of the American West donated both lo-tech and hi-tech devices: an antler-handle knife from 1857 and the telescope used from 1852 to 1892 by Pio Pico, the last Mexican governor of California. The knife can be compared to Tom LaDuke’s “Untitled Self-Portrait” (2007), a clay and epoxy knife with a skeletal head on its blade. And the telescope is brilliantly paired with Gail Wight’s “Meaning of Minuscule” (2007), a Plexiglas sculpture of a gigantic microscope. Its viewing platform is replaced by an LCD screen on which various scientific images are randomly displayed.

Several of the artworks are technically and intellectually enchanting. Ben Jackel constructs machines from unexpected materials: his “Caterpillar” is a small but precisely detailed tractor made from stoneware and beeswax. Jackel also works in unexpected scale: his “Down to the Bone” is an immense axe of redwood and graphite. Both tempt the viewer visually and conceptually. Stephen Berkman’s “Obscura Object” turns a late nineteenth century woman’s dress into a humorous play on forbidden sexuality and secret image-making devices. Janine Antoni’s “Hand to Mouth” takes a silver spoon and imprints it with grasping fingers and biting teeth in an ironic re-telling of the mixed blessings of privileged birth. Michael C. McMillen created one of his period tableaux for watching “Master Hands,” a 1936 film about tools produced by the Chevrolet Motor Company.

Earlier, I observed that this exhibition has a certain nostalgic sentiment. Most of the functional tools are antiques. Even the most recent--the 1996 models for the Mars Pathfinder and Rover (courtesy of the Jet Propulsion Laboratory [JPL] and Caltech)--have a certain old-science-fiction-movie patina by now. But these late twentieth century tools are unusual in this inventory. Many more of the functional objects are 100 to 150 years old. And many of the artworks display similar retrospective views. McMillen and Berkman’s are nostalgic works that express a yearning for past perspectives.

As I explored the exhibition, I remembered walking through a junk store on a back road in New Mexico one frosty December afternoon. Like the objects in the exhibition, most of the metal in that store was rusted, most of the paper yellowed and torn. I thought about picking through bins of abandoned possessions, yearning to locate a treasure in the detritus. The recollection made me think about artists like the late Ed Kienholz and Sarah Perry, who are not included in the exhibition, but could have been. Both have collected discarded tools and transformed them into art. And then I thought about those pesky cultural categories that teach us to distinguish functional objects like tools from what we call “art.”

One definition of a tool is “an entity used to interface between two or more domains that facilitates more effective action of one domain upon the other.” If you accept that definition, well, then art becomes a tool, doesn’t it? It has a liminal presence, existing in the threshold between maker and viewer, ideally allowing the former to communicate with the latter in a transformative way. I never would have gotten to that understanding of art as something as basic as knives and spoons and telescopes and tractors if I hadn’t spent time with “Tools.” I guess that means that the exhibition itself is also a tool.