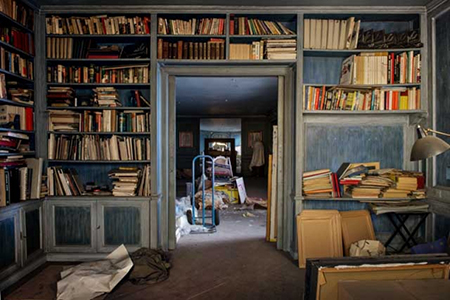 Haunting is the word that comes to mind when viewing Miguel Soler-Roig’s photographs of the home he lived in as a child in Barcelona. After 35 years, he returned in 2014 to photograph all that remains after his mother departed. The interiors are in disarray, as though she was called away suddenly in the middle of packing and never returned. Partially wrapped objects sit in the middle of the floor; books are piled topsy-turvy in bookshelves and on tables; frames lean against the wall, stripped of their paintings; and half-filled shopping bags have been abandoned. The light seeps in through broken slats of window shades, and a small lamp on the floor casts a circle of light, revealing the dirt and dust of decades of neglect.

Soler-Roig’s masterly treatment of light and shadow adds drama to these domestic interiors, especially “Reflection of a Legacy” and “Readings from the Past.” In the former, a bright light in the room is reflected in a wall-sized mirror surrounding a fireplace, casting a beam across the floor. The shot is dominated by several large paintings, a massive empty frame, two half-filled cardboard boxes and a mysterious object wrapped in a fringed white cloth. “Readings from the Past” is shot in the adjacent library looking back into the room. The library shelves are still full of books and a hand truck stands just outside the doorway. The composition is symmetrical, with a single vanishing point that creates a sense of depth. The series of rectangles and squares created by doorways, wall panels, works of art, and books lend the image a feeling of calm and stability, despite the subject matter. There is something of Vermeer in these melancholy photographs that resemble paintings, thanks to their jewel tones, attention to detail and chiaroscuro effects. Soler-Roig describes the ambivalent experience of returning after so many years, saying that he was “lucky to recharge my soul but also suffer the sad disappointment of confronting something lost, abandoned, forgotten.” The Barcelona residence remains untouched to this day.