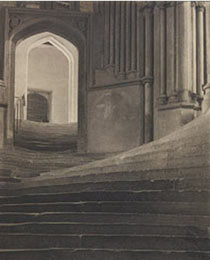 The British photographer, Frederick H. Evans’ strongest emotion may well have been his passion for “perfect” platinum prints. In 1915, when he was no longer able to afford the rising costs of that medium, he abandoned photography – nearly 30 years before his death.

Platinum prints are loved by photographers and treasured by collectors because of their soft surface, wide tonal range and permanence. Evan’s work ethic, based on careful studies of exposure, light and point of view, was underscored by his obsessive belief in producing prints developed from negatives free of manipulation. He valued photography as an art, ardently devising methods of display that framed his pictures within mats designed to augment their presence.

In “Westminster Abbey: Chapel of Henry VII,” Evans demonstrated that he was capable of maintaining details in the shadowy, hand hewn stone vaults of that English Gothic edifice without over-exposing the sun-lit surfaces of its interior. Evans began producing his beautifully crafted, delicate pictures of architectonic elements from medieval cathedrals in England and France late in the 19th century, during the waning years of Queen Victoria’s reign. Admiration for guilds and aesthetic ideas borrowed from Medieval Europe served, at that time, as a model for determined devotees of arts and crafts movements in their stand against the ills of urban industrialization.

Botanical details, such as the oak leaf carvings adorning columns in Southwell Cathedral, came to life in Evans’ landscape photographs of the vanishing English countryside. Tree trunks that echoed the form of pillars supporting the cathedrals that Evans cherished re-appear, harvested and hand hewn, in photographs of the country house of William Morris, leader of the Arts and Crafts movement. Portraits of several of Evans’ talented cohorts, including George Bernard Shaw and Aubrey Beardsley, afford additional clues as to where Evans’ sympathies lie.

The three artists featured in “Urban Panoramas,” an investigation of contemporary infrastructure, running concurrently with the exhibition of Evan’s century old studies, utilize a variety of technological advances and contemporary notions of deserving subject matter in their diverse contributions to the expansion of the physical and conceptual boundaries of photography.

As opposed to Evans’ exhibition of 169 delicate, placid, modestly scaled photographs, each contemporary artist is limited to less than a dozen large, vibrant, well edited works, leaving the viewer energized and eager to see more. The cathedrals, shells and other objects photographed by Evans were often considered to be beautiful in themselves before being memorialized by professional photographers of his day who endeavored to distance themselves from the common. A century later, the beauty in Opie, Liao and Kim’s work is concentrated in their ability to demystify and inform, functioning as bearers of complex meaning while capturing the character of ordinary, familiar city scenes.

Catherine Opie employs a 7 x 17” camera of the type typically used for landscape or group photography to document a type of Los Angeles landscape: the mini-mall. In sites as diverse as Koreatown and the Miracle Mile, Opie’s astute, wide-angle studies of drive-by communities question how identity is structured. They bring signage in a variety of languages to our attention, entwining fact with fantasy as we ponder their juxtaposition of power poles, palm trees and Mexican American Food establishments, a couple of doors down from the East/West Bank. Opie asks us to consider how we learn to assimilate while maintaining our own cultural identity.

Jeff Chien-Hsing Liao invites us to travel with him along the route of the Number 7 subway from Flushing Queens to Times Square in Manhattan. Liao makes flawless use of digital editing to weave together shots he has taken of and from the train tracks over a period of time. The Taiwanese born photographer fabricates what appears to be a series of documentary photographs out of composite imagery, playfully incorporating himself into the first and last colorful images in this edited version of his journey.

Kim Soo selected midnight of the longest day of the summer solstice to stand at a highpoint in Reykjavik, photographing a variety of close up and distant views of the city. In each of the ten large works displayed here Soo laboriously sliced into the surfaces of two prints layered together. She essentially cut out the volume of the buildings, achieving striking, shadowy, multi-dimensional effects. Soo confesses that the photographs are full of happy surprises. “Bushes pop thru buildings and the sea floods the interior of warehouses.” Devoid of people, Soo’s imagery combines actual and envisioned low relief, underscoring architectural structure while referencing issues of photographic transparency.