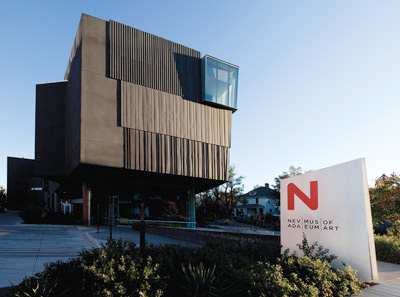 Like the desert landscape that surrounds it, Reno, Nevada, has an intriguing richness that is not immediately obvious. It's certainly not the first place the art world looks for innovative developments. It's time to look again. Reno is home to the newly established Center for Art + Environment (CA+E), which is facilitating new ways of investigating the intersection of art and environment. This is such a timely subject and the Center has already established such depth in it, it's a surprise to learn that it's the first of its kind and that it opened so recently: January last year. The CA+E, a project of the Nevada Museum of Art, is unique in its scope, comprehensiveness, and intent to give continual support to exploring the intersection of art and the environment.

'What I discovered,' notes founding CA+E Director William Fox about his research when developing the Center, 'much to my surprise, was that there was no museum-based research institute in the world dealing with art in the environment, no consistent program at all. There's a lot of stuff about earth works and ecological art, environmental art, but no one was really sitting down, and no one was collecting the materials. No one was out there supporting the creation of new work on a consistent, year-to-year, basis, and no one was promoting the study and understanding of that work.'

The three objectives of the Center are to promote the creation, study, and collection of work addressing art and environment, on a very broad scale. 'We define the environment,' explains Fox, 'as natural, built, and virtual.' To promote the creation of work, the Center just announced its first grant, for $10,000, to be awarded this summer. 'We hope for it to be annual,' Fox says. 'We hope for it to extend to more than one per year. So that helps support the creation of work. Then what we do, not only from that project, but from many other projects around the world, we collect the archives; we collect the ephemera that surrounds the artwork that's produced.'

Located in the museum, the Center has a library where its growing collection of research materials is available for study, including the archives from artists such as: Michael Heizer, Walter De Maria, Lewis Baltz, Lita Albuquerque, David Nash, Mark Klett, Lucy Raven, and Patricia Watts. 'We've now collected twenty archives [representing over 100 artists] from five continents,' says Fox. The Center is also in negotiations with the Center for Land Use Interpretation (CLUI) to receive a selection of its archives; that is expected to double the number of artists and organizations represented. The CA+E also has a dedicated exhibition space at the museum and is involved in the ongoing art and environment exhibitions that are a regular part of their programming.

Currently on show (through May 9) is China Town, a video made up of over 7,000 images by artist Lucy Raven. In it, Raven traces the creation of copper wire, from mines in the Nevada desert to processing and final production in China. Archives of the project are also on display. Future CA+E shows include 'Physiocartographies' by Bill Gilbert, in which he explores the disconnect between our conception of landscape and our physical experience of it; and 'On the Map,' a group show featuring work that looks at the intersection between humans and cartography.

Earlier this year, the Center's Web presence was redesigned and increased; Fox edits a blog there and Colin Robertson, the museum's curator of education, edits a book review section. The site also hosts on online community, which features a social network of almost 300 members to date (and is growing at a rate of roughly twenty people per month), a forum, and other interactive and educational sections. Plans are to have all of the archives online, as well. What is most exciting about the Center is the promise of innovation. It brings together diverse approaches to interpreting our interactions with our surroundings: scientific, artistic, architectural, literary, and scholarly.

'What I found when I was working in the Getty Research Center,' Fox notes, 'was that the way you create new knowledge is you take people doing different things, and you put them next to one and other. So, if you're a physicist and you want to go to a research institute, you better propose talking to a biologist, or a mathematician or a chemist, not another physicist. Because they don't want you to just deepen what is already in an existing field or existing train of thought. They want to create a new train of thought. So that's kind of what weÕre up to here.' In particular, Fox points out, the Center is focused on the intersection of art and science with the environment. Board member and director of the Desert Research Institute (DRI) Dr. Stephen Wells adds that other organizations have flirted with similar ideas, but comparatively, this project is 'on steroids.'

The CA+E is an ambitious but logical next step for the museum. The museum was founded 78 years ago by a collector named Charles F. Cutts and Dr. James Church, a University of Nevada, Reno (UNR) professor, art collector, avid outdoorsman--he is the first person on record to summit Mount Rose--and a climatologist. 'Not only does he appreciate and collect art,' Fox explains about Church, 'but he's also the fellow who establishes the snow lab atop Mount Rose.' He goes on to travel world-wide to teach people how to measure snowfall and, more importantly, the water content of snowfall and how that will affect their agriculture in the coming year. So this is a global climate guy in the '20s and '30s and '40s setting up labs around the world who's also one of the founders of the art museum. And the art museum starts involving mostly plein air people who are outside painting the environment because thatÕs what they're really interested in. 'To say that there's a longstanding commitment to art in the environment is not just part of our mission statement or vision, it's part of our reality.'

More recently, in the early 1990s, the museum began to amass its Altered Landscapes photography collection, now comprising over seven hundred contemporary images, including works by Edward Burtynsky, Richard Misrach and Pipo Nguyen-duy, that document the changing landscape. In 2006, the Art + Environment exhibition, program, and publication series was established. Ann Wolfe was brought in as curator of exhibitions and collections, along with Robertson, specifically because of experience and interest in art in the environment.

A seminal tipping point was 2008's Art + Environment Conference in 2008, an eclectic gathering which demonstrated the museum's interest in pushing the genre beyond the art world. Among the twenty-one presenters were: biologist and Director of the Nevada Desert FACE Facility and the Mojave Global Change Facility, Lynn Fenstermaker; Dan Goods from NASA's jet propulsion laboratory and designer of four-dimensional objects; and former senior editor of Dwell magazine and author of 'BLDGBLOG', Geoff Manaugh. The conference sold out the available 185 seats and an additional 500 people attended virtually via a live blog. Within two weeks of the event, there were over 3 million online references to the conference.

Former Director Steven High had been working with Fox for the three years previous to the conference to assess the viability of a research institute at the museum. As a writer, poet, and scholar, Fox was a perfect match. He had over a decade of experience exploring the topic of art and environment and had been involved in the arts even longer, in Reno and elsewhere. He had been a visiting scholar at the Getty Research Institute since 2002. In addition, he had written numerous books--eleven to date--about the intersection of cognition and landscape. 'It's a topic more easily addressed in big empty places,' he observes. 'These are open spaces, but they're not empty. Nevada, geomorphologically, is a good place to look at this stuff.'

Reno and the Nevada desert is not just a great location for the Center because of the surrounding landscape. It is also in close proximity to the annual weeklong Burning Man art and counterculture mega-festival, as well as arts organizations such as the Black Rock Institute and the For-Site Foundation. The LAÐbased CLUI has a residency in Wendover on the Nevada/Utah boarder. Institutionally, the internationally recognized DRI, a cutting-edge facility that supports scientific and engineering applied earth science research, is located just miles away. As is UNR, where Fox is an adjunct professor; the school offers the only literature and environment PhD degree in the world, and the school is renowned for its strength in earth sciences. Its growing fine arts department recently launched a master's program.

The Center has a relationship and/or has worked with all of these entities, and more. When British artist Chris Drury created the commissioned exhibition 'Mushrooms/Clouds'--an investigation into the processes of destruction and renewal in nature and how humans effect them, shown in conjunction with the 2008 conference--he worked with the DRI, San Francisco-based Haines Gallery, the For-Site Foundation, and the Paiute Tribe. Fox recently met with the Nature Conservancy to discuss the possibility of an artist being involved in the next stage of the Truckee River (which flows between Lake Tahoe through Reno to Pyramid Lake) remediation project, documenting and/or helping shape the project. The CA+E is currently working with the Reno Philharmonic, which commissioned a composition inspired by the environment. Another huge collaboration in the works, to be announced this summer, is the next conference, which will take place in fall of 2011.