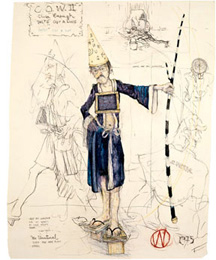 In 1969, a thirty-two year old William T. Wiley found himself using the despised medium of ink and watercolor on relatively small sheets of precious paper, inaugurating a long-standing practice that was far out of that year's art world fashion, even more so than oil paint on canvas. These works came off as imaginary maps that playfully merged pictorial and schematic representations, part cartoon narrative and part surrealist diary entry. Four decades later, they seem rather prescient in their picturing of somewhat forlorn situations where something that was on the verge of happening seemed to have subsequently abandoned and then rediscovered and redefined by a different order of perception. To our jaded eyes, these small works appear as little morality plays that cleverly take the idea of historical authority to task, and in retrospect they seem to have presaged the very postmodern notion that commands us to use geographic and archeological metaphors in place of soon-to-be discredited historical ones. Once again, Wiley got there first, and if poetic delicacy can still be taken to mean anything, he can be said to have done it the best.

During that watershed year, harsh lines were drawn in the art world: either one worked with pure color, pure form or pure phenomena in a manner related to Minimalism, or one worked exclusively with conceptual deployments of language, occasionally buttressed with photographic documentation. But, painting? And actually painting a picture? That was just not done, and would not be done for another decade, when “New Image” painting (in North America) and “Neo-Expressionist” painting (in Europe) took a newly post-modernized art world by storm.

Of course, by 1969, Wiley had already accomplished a great deal. In 1967, he work was included in Peter Selz’s landmark “Funk” exhibition at the University Art Museum in Berkeley, and that same year he was also included in the Whitney Biennial and Maurice Tuchman’s “American Sculpture of the 1960s.” Some of the works hailing from these early exhibitions are featured in the first of three separate galleries devoted to five decades of Wiley’s work (on view through July 18, 2010) at the University Art Museum in Berkeley. The exhibition is titled “What’s it all Mean? William T. Wiley in Retrospect,” and was originally curated by Joann Moser for the Smithsonian American Art Museum in Washington, D.C. The catalog that accompanies the exhibition includes informative essays by Moser, John Yau and John Hanhardt, the latter of which focuses on Wiley’s films and performance events, which is an imposing body of work in its own right, even though it only has faint representation in the exhibition.

One of the most interesting facts that emerges from Moser’s essay is that, in 1963, Wiley did costumes, sets and props for a San Francisco Mime-Troupe production of Alfred Jarry’s 1897 proto-Surrealist play titled “Ubu Roi,” and this involvement seems to have exerted an important influence on all of the artist’s subsequent work. From that point forward, Wiley’s work as both a painter and a sculptor was infected by a wry Surrealism, but one that took a special pleasure in highlighting the absurdity of the minimalist forms that were fetishized throughout the late 1960s and early 1970s as the apex of art world seriousness. A good example of this is a sculpture titled Big Drag (1968), which features a large triangular slab of metal anchoring a dangling rope and sporting the work’s title in a cursive script. The implication is clear: minimalist art is but a weighty drag on the imagination.

The two works in the exhibition that were executed prior to the “Ubu Roi” project (Flag Song from 1959 and Columbus Rerouted from 1961) are the student efforts of a bona fide prodigy blessed with a natural virtuosity, but they clearly derive from the work of teachers and fellow travelers such as Wally Hedrick (who painted an American flag in 1954, before Jasper Johns did) and Frank Lobdell. Columbus Rerouted shows some of the same thick oil paint and compositional convolutions that we might notice in Lobdell's paintings from the same period, but it bears mentioning here that it is also one of three paintings of that name that the artist painted from 1960 to 1962, suggesting that, even at that early date, he was thinking about the ways that historical accidents create seemingly inevitable destinies.

Wiley’s early attitude about Minimalism is also signaled in an early three-dimensional work called Slant Step Rhino (1966), that being a leaden slant-step with an imitation Rhinoceros horn planted on its seat. This was Wiley’s comic contribution to a surprisingly durable cult that he and former UC Davis student Bruce Nauman founded in 1966. One of the great unwritten stories of contemporary art history pertains to the relationship of Nauman’s work to that of his teacher, and given that the Berkeley Museum has recently staged exhibitions of both artists’ work, a two-artist follow up around that theme might not be a bad idea.

If the first gallery can be seen to loosely mirror the look and feel of Wiley’s first retrospective (curated by Brenda Richardson at the same museum in 1971), then the second gallery can be said to clearly hark back to his second retrospective which was held at the San Francisco Museum of Modern Art in 1980 (originally curated by Graham Beal at the Walker Art Center). Here, we see a preponderance of the aforementioned watercolor paintings, many of which are hung salon style along with selections from the artist’s burgeoning print output. The second gallery also features several larger paintings, such as Rhoom for Error (1982), sporting much manically innovative doodling in felt-tip pen and charcoal, plus strategically deployed slabs of bright color that both confounds and enlivens the pictorial space. Here we see what many might call a signature Wiley. But at the same time, the idea that there ever could be a signature work by Wiley is hard to support, because he is perhaps the most versatile artist in the history of American art, one who has worked in a staggering variety of media to address an equally staggering variety of aesthetic topics. Comparing this retrospective to that of Martin Kippenberger a year ago makes the latter artist look relatively circumspect in the game of perfervid multimedia output.

It is worth noting that the second gallery starts with Wiley’s ushering in of works featuring an alter ego named “Mr. Unnatural,” no doubt influenced by Robert Crumb's famous cartoon character called “Mr. Natural.” Mr. Unnatural is a lanky character who wears absurdly platformed sandals, a bathrobe, a conical dunce cap and a small chalkboard hung around his neck while sporting a long Pinochian nose, making him look like a befuddled clown haplessly playing the role of shaman. It is worth noting that Wiley’s long series of Mr. Unnatural works starts in 1975, a year after Joseph Beuys became famous for his performance with coyotes titled I like America and America Likes Me. Could it be that Wiley was mocking Beuys’ shamanic pretenses in these works? Methinks the answer is yes, but with that mocking moment (which took place at the same exact time that Lynda Benglis became instantly famous for posing nude in an Artforum ad with a dildo), we also note that soon thereafter, New York would lose whatever interest it had in California art in favor of a renewed enthusiasm for work being done in Europe. California collectors followed suit, and the viability of the Northern California art scene would never fully recover from its 1945-1975 heyday.

Wiley’s post-1990 work predominates the third gallery, and here we might note that the mood grows a bit chilly, at least in relation to the spirit of happy confidence that earmarks the earlier work. Even though the post-1990 works make more use of paint and color, and a bit less use of line, the temper of the work is relatively somber and—dare I say it?—historical. If Wiley’s work was adamantly a-historical for the almost three decades that follow Columbus Rerouted, as if he could comfortably wait until the world caught up with his cartographies of the imagination, then the most recent works seem newly concerned with history—particularly art history--at a present time when "the death of master narratives" had become a kind of art world cant authorizing far too many curatorial mis-adventures premised on "breaking boundaries," "navigating territories" or "refiguring the terrain." Many of Wiley's paintings from this period sport deft quotations from well-known art historical figures (in particular, Hieronymus Bosch and Pieter Bruegel of Tower of Babel fame) and they seem cautionary in their tone, anxiously anticipating the current decade starting with the 9/11 attacks and ending with a global financial meltdown. Maybe these works bespeak Wiley's concern for his own place in an art history that his earlier work had so wittily taken to task. Still, what Wiley's work from the past two decades gives us is pretty much the same thing that we see in earlier efforts, a witty geography of the imagination that has sustained five decades of restlessness.