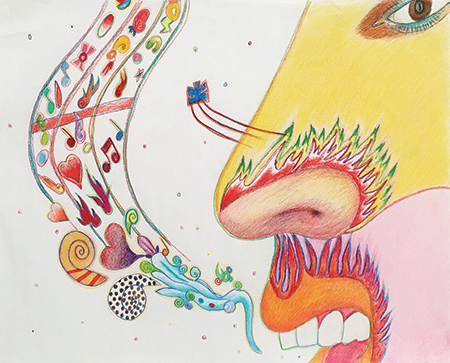 Once upon a time the word “Chicano” was only vaguely familiar beyond that community. The name of the labor leader Cesar Chavez was better known. Many morally-minded people dutifully boycotted lettuce and grapes, but the idea of a Chicano artist, much less Chicano art, was not part of local discourse.

Today the word is enshrined in local nomenclature, even embellished with a slash of equality as “Chicana/o.” Chicana/o, because one day in 1974 Los Four strode through the pure white cubes of the Los Angeles County Museum, spray-painting the front of the building as they arrived. Their exhibition was more than an art show, it became a mark on the land that established Chicano art as a cultural force. Three of Los Four located their art in the streets of their city. The blue toned paintings of Carlos Almaraz set L.A. on fire with orange and pink flames. Frank Romero drove us to the 1984 Olympics. And Gilbert “Magu” Luján dreamed of a mythical territory “Magulandia,” a Chicano paradise.

In this modern day Atzlán, twentieth century Chicana/os, bearing the proud profiles of Aztec warriors, rode high in low cars, marking their ancestral territory and retaking their rightful place as rulers of the land. Luján, who is being honored this fall with a drawing show at Craig Krull Gallery and a retrospective at his alma mater, UC Irvine, was a dedicated political activist. But he used wit and humor to assert a Chicano presence. Unlike Romero, Almaraz, and Beto de la Rocha (who would reject the making of art for decades), who were primarily painters, Luján drew and made ceramic sculptures. And he drew elaborately, imaginatively, creating alternative universes where he and his friends could live la vida loca on the streets.

The Chichimacs, ancestors of the Aztecs once again roll regally through the artist’s intricately drawn ideal world, returning to Atzlán, driving over fantasy maps of free roads that were open to all Chicanos. These delicate works were offset by substantive sculptures glazed in vivid colors. Lujan’s famous “dog,” his recurring leitmotif, was assembled from two flipped Aztec pyramids, appearing as a solid ceramic form and as a drawing. In "El Fireboy y El Mingo" the orange dog was accompanied by the artist himself, trademark yellow hair blazing with flames shooting out of his head.

Luján’s other recurring trademark was the symbol of Chicano pride, the ordinary American car, cruising bajito y suavecito, transformed into rolling artistic statements by their Chicano owners. Appropriated Fords and Chevys, revelations of personal identity, moved along Whittier Boulevard. To drive an embellished car, a moving mural, was to propel an act of open defiance to the dominant power. But the artist considered these spray-painted cars to be domestic products, like "My Family Car," engulfed in flames and lovingly crafted at home.

In Luján’s inked world of Magulandia, women are empowered. One of art’s great characters, La Peaches, one of the “dog people,” cruises in her own set of wheels, often accompanied by her dog boyfriend, Artster. Having created a dream world of peace, cohabitation and hope, when he died in 2011 Lujan might have concluded that he could sleep well. His legacy was in safe hands and his message of inclusiveness had been heard. As we near 2018, the national mood has shifted, darkened, stiffened into opposing camps. Lujan’s artistic legacy reads in a totally different way: not as a dream fulfilled, but as “a dream deferred.” Once again, the late artist must inspire his audience and remind us that the arc of justice is long but it has and will bend.