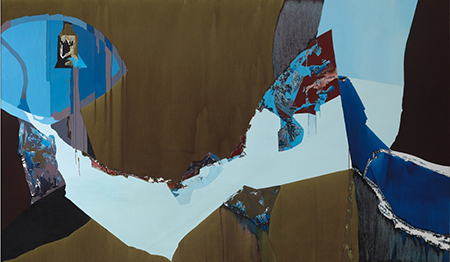 The late and prolific Dorothy Hood was among of a handful of women who produced large-scale paintings during the latter half of the 20th century. Seven of her major color-field paintings from the 1970s are included in this show of more than 16 works, the largest of which is “Minoan Blue” (1973) at 84 inches tall by 143 inches wide. Characteristically this piece juxtaposes large planes of color with smaller jagged areas embellished with crystalline details, an effect achieved by applying paint with crumpled paper or tin foil. Throughout her career, Hood drew on her love of nature and her fascination with philosophy and science for inspiration. She has described her paintings as “inner realms of outer space” and “landscapes of my psyche.” The broad expanses of her native Texas and the proximity of NASA were major influences on her work as well, as were abstract expressionism and surrealism.

Hood lived in Mexico for many years, marrying Bolivian composer and conductor José María Velasco Maidana. Hood and Maidana relocated to Houston in 1962, and the move to a larger studio in the late 1960s resulted in dramatically larger paintings. Hood traveled several times to India, and that influence resulted in more intense colors and a new richness in her collages, which she first showed in the early 1980s. There are four of these undated collages in the show. “Life as a Globe” incorporates images of the earth and moon, a globe with constellations, an ancient astrological chart, an exotic insect, and a spinning galaxy. Hood’s numerous collages provide insight into the inspiration for her sublime landscapes.

Hood, who passed away in 2000 at the age of 82, was referred to as the “mother of modern art in Texas” by Art Museum of South Texas Director William Otton. Much has been written about Hood being a “regional artist” and therefore under-appreciated, which she herself attributed to residing in Houston rather than New York or Europe. The work, however relegated, is powerful, and provide the best explanation as to why she has remained an influence on subsequent generations of Texas artists.