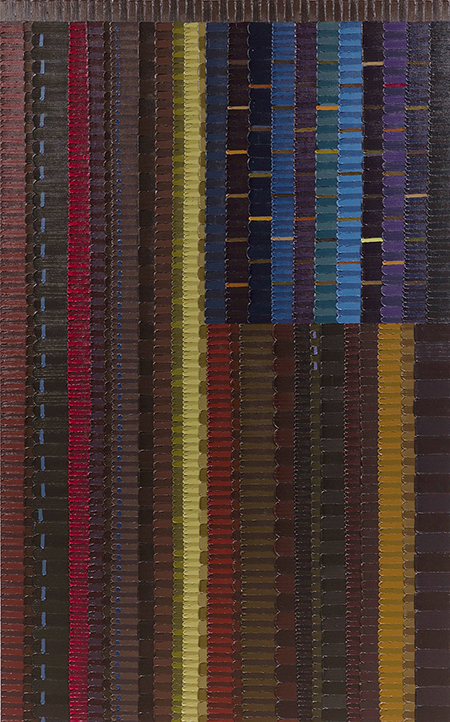 As I documented in the 1994-96 exhibition “Old Glory: The American Flag in Contemporary Art,” artists’ flag representations alternates between being apolitical, as in Pop art of the early 1960s, and being very heated, as in works from the Vietnam era and the culture wars of the early 1990s. Now that we are in one of the most politically charged moments in American history, artists are again reexamining the U.S. flag in terms of its potential socio-political symbolism. Comparing the recent flag paintings of June Edmonds with new assemblage works by Justin Prough provide insight into what the 2020 Presidential election is really about.

Because Edmonds is African-American, her flag paintings belong to a lineage of Black artists appropriating the national icon as a platform for examining race relations in the U.S. or reclaiming it as a symbol of Black pride. In Faith Ringgold’s “The Flag is Bleeding” (1967) the American flag’s stripes are transformed into blood-spattered fencing, behind which a White woman attempts to mediate tensions between a White man and a Black man. In his fabric work ”African-American Flag” (1990), David Hammons unapologetically commemorates his African heritage by replacing the traditional flag colors red, white, and blue with green, red, and black, the colors of the African National Congress. Like Hammons, Edmonds forgoes the actual flag palette in her paintings, using an even broader range of colors with a different symbolic intent, in that a majority derive from African-American skin tones.

Edmonds conceived the idea for her series “Allegiances and Convictions” (https://www.artsy.net/show/luis-de-jesus-los-angeles-june-edmonds-allegiances-and-convictions) after driving through the South and witnessing a large scale Confederate flag dominate a hillside. In response, she began painting flag images that are testaments to the beauty and dignity of Black America. Exquisitely crafted, the paintings are constructed from thick, even, autonomous slabs of paint that combine to simulate the appearance of lush, multicolored quilts. In terms of content, each pays homage to a significant figure from Black history, current affairs, or the artist’s personal story.

Among those honored are Elizabeth Hobbs Keckley, a seamstress and assistant to Mary Todd Lincoln, and author of the book “Thirty Years a Slave and Four Years in the White House”; Frances Ellen Watkins, a poet and early abolitionist; Claudette Colvin, who, at age 15 and 9 months before the Rosa Parks incident, courageously refused to give up her seat on a segregated bus in Alabama; Octavius Valentine Catto, a 19th century civil rights activist; the artist’s grandparents; and U.S. Representative Ilhan Omar. As a collective body of work, Edmonds’ flag paintings are sumptuous affirmations of diversity, inclusivity and national unity. In that respect, they reflect long term goals of the Biden/Harris ticket.

Contrasting with Edmonds’ polychromatic palette, Prough’s “The Whitewashing of America” series (https://shoeboxprojects.com/justin-prough-the-whitewashing-of-america/) is, as the title indicates, monochromatic white. Prough, who is a White father of an African-American daughter, created the series in response to a question in 2018 from the then 9-year-old. After learning about Trump’s immigration policies she asked, “Why does the President hate people like me? You know, people from Africa?” Deeply troubled by the question, Prough began making wall assemblages using American flags as backdrops over which he constructed compositions from household objects and graphic design letters, and then literally whitewashed them. Although making the assemblages was emotionally cathartic at a personal level, they stand on their own as powerful indictments of Trumpism.

In several of the compositions, such as “Full of Shit,” the flag is shown upside down as a metaphor for the lack of American normalcy. In this particular work, clusters of crosses and Corona virus spheres spill like a waterfall from the top to bottom, with most of the stripes bearing Trump’s own words, such as “THE CHINESE VIRUS” and “IT IS WHAT IT IS.” A nearly used-up roll of toilet paper covers Trump’s mouth in a printed portrait of him in the star field to the lower right. “Dump Trump,” features stripes imprinted with a rewriting of the Preamble to the Constitution, with phrases such as “IN ORDER TO FRACTURE A FRAGILE UNION,” and a centrally placed toy dump truck that unloads words such as ‘TRUTH’ and ‘DEMOCRACY’ into a swirling sinkhole in the star field. Trump’s love for Putin and his obsessive tweeting are referenced in “Social Revulsion,” where an upper left star field features a hammer and sickle with the words “DESIGNED IN RUSSIA. MADE IN THE USA.” on the hammer’s arm. Rows of Twitter bird symbols fill the stripes.

Although much of Prough’s commentary is communicated through words and images, it is the unifying color white that gives his assemblages their most disturbing potency. For it is impossible to view these all-white works (save for a tiny red MAGA hat) without thinking about White supremacy, the unspoken ideology behind the Trump/Pence agenda.