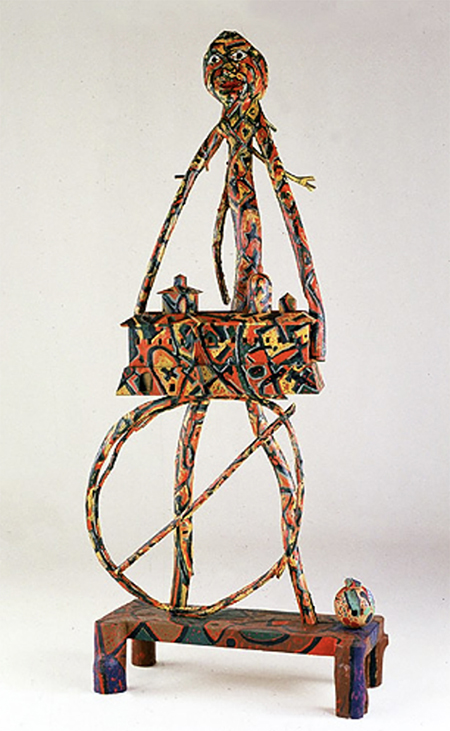 Exactly twenty years after his death in Pacific Beach, California, Italo Scanga is not forgotten. But his influence and role in contemporary art from the 1980s on, in New York as well as the West Coast, have not been fully appreciated. My book, “Italo Scanga 1932-2001,” commissioned and published by his closest friend, Dale Chihuly, appeared last year and details how Scanga, born in Italy, was never fully at home on either continent. He was, in fact, a permanent immigrant. In this, he traveled back and forth to Europe for years, revisiting his childhood village in the late 1950s. He went there to create “Images/Reflections/Photographs” (1979), a photo-book that recalls and was specifically modeled on the landmark Robert Frank photo study, “The Americans” (1959). Frank had cast a cold eye on unglamorous aspects of American life, including racial injustice, rural poverty and urban decay. At the same time, Scanga fell in love with America and was seduced by its openness, its consumer profusion after a childhood of poverty and food insecurity, and its possibilities for individual freedom despite the history of prejudice and arrogance of power.

Scanga’s life and art were cut into those two parts: Italy and America. Not that he made art while in Italy as a child, but his training with a furniture maker in his native village of Lago, Cosenza, (Calabria) inspired his reverence for material construction, as well as cauterizing his memories of wartime hardships and paternal abandonment (his Pennsylvania miner father was unable to get the family of six out of Italy in time). Later would come recognition as a returning exile in the form of numerous group shows and retrospective surveys.

With access to papers, letters and correspondence, I was able to trace back to, for example, his pioneering shows at 93 and 112 Greene Street and White Columns beginning in 1971 in then nascent SoHo. These were unheralded introductions of “arte povera” to New Yorkers, who were barely familiar with Scanga and other Italian artists that the late curator Germano Celant included in his 1970 exhibition in Turin. Audiences were caught off guard by Scanga’s scattered conglomerations of timber, baskets, aromatic spices and glass vessels. They did not fit into mainstream schools of contemporary American art, such as Minimalism or Pop Art.

After having taught on the East Coast at Rhode Island School of Design, Brown University and Temple University in Philadelphia, Scanga took a position at UC San Diego in 1976, thus bifurcating his art career. Although he missed New York and his minimalist buddies, given his own on-campus studio, Scanga plowed ahead with his mixed media sculptures, often employing recycled wooden religious statues, which led to critic Susan C. Larsen’s “ARTnews” cover story in 1984. By then, he had moved uptown to Frank Kolbert Gallery in 1980, exhibiting tall painted alder-branch figures, his “Fear” series — “fear of alcohol,” “fear of buying a house,” “fear of tornado,” and so on. Seemingly connected to social conditions, Scanga’s approach invariably dealt with self, not group identity. Nevertheless, accepting the autobiographical drive behind all of his art, Scanga expressed such views on “Homelessness” (1995) in his monotypes (begun at Pilchuck Glass School, where he taught summers between 1973 and 1997), as well as addressing nature, ecology, and wildlife safety, especially in his final bronzes.

Southern California provided shelter for the permanent immigrant; its climate recalled southern Italy, its abundance of food and wine surpassed the traumatic deprivations of wartime. Along with Chihuly, he became an inveterate thrift-shop and second-hand shop addict.

Scanga’s only artworks dealing with World War II, the “Montecassino” series (1983), employed innocent barnyard animals as eyewitnesses to the horrific bombing of a hilltop monastery south of Rome. Also referred to as the “Battle of Rome,” 55,000 Allied soldiers lost their lives in the operation. The abbey was totally destroyed and then rebuilt after the war. Like Montecassino, Scanga was shattered by the war and reconstituted afterwards in America.

His high level of education (Michigan State U., M.A, B.A.) wedded to his indigenous absorption of art and architecture in Europe (beginning with his first trip home to Italy while in the U.S. Army), made him a brilliant lecturer and art teacher, beloved by many former students including, most notably, Bruce Nauman (at University of Wisconsin, Scanga’s first teaching job); Ree Morton and Steve Keister (Temple); and Richard Fleischner (RISD). A loquacious conversationalist, Scanga truly embodied the breadth of the Italian Renaissance with his varied interests in astronomy, religion, mathematics, music, botany and cycles of history he alluded to in an edition of Giambattista Vico he illustrated in 1990.

The two decades since his death do not constitute a Vicovian spiral or “cycle,” but revealed and intensified issues Scanga touched on in his art: social inequities; holistic world views; and the tender process of taking junk and turning it into sacred effigies that connote the fallibility and nobility of human character.