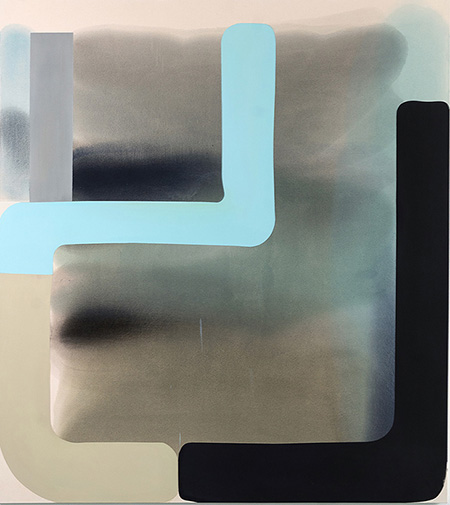 Marcelyn McNeil describes the surface of her abstract oil paintings as “a luminous veil” in her description of a new series of four large-scale paintings, all executed in 2022. Done on raw canvas, they are layered and subtle and bring to mind the color field painters, perhaps Helen Frankenthaler, but more so Morris Louis, whose own “Veils” series directly set the precedent.

McNeil’s layering of paint situates veils over veils of transparent color achieved by a technique in which she hands control over to gravity by pouring paint over the surface from above. This results in an image that comes into its own largely by chance, placing the hand of the artist at some degree of remove. After the surface elements settle, McNeil finishes by taping off sections, forming solid, opaque bands of color that curve and meander over the picture plane, often traversing the outer borders and framing and enclosing the ethereal surfaces.

These sumptuous paintings demand sustained attention in order to conjure a place or feeling that the artist describes as both “affirmative and melancholic.” For inspiration, she drew the title of this series from “On Earth We’re Briefly Gorgeous,” the 2019 epistolary novel by Ocean Vuong. The tension between the affirmative and melancholic comes through once the ethereal and solid elements are bound together in an established space of flowing color, overlaid with bands of restraint.

In the anagrammatic duo “Dbl X(one)” and “Dbl X(two)” (both 60 x 50 inches), the bands of color that punctuate the artist’s final layers of paint form an “X” that traverses the entire surface of each painting. With a bluish purple register in “one,” and a bright red in “two” they mark off the closest elements to the viewer and create the tension that makes a receding depth out of McNeil’s hazy and deeply ethereal ground. An “X” shape crosses at the center of each painting such that in “one” there are bands at the top and bottom that make a “Z,” and in “two” the bands are at the left and right forming an “N.” Depending on how you look at each one, they also form the letters in reverse. These puzzling marks are irregular toward the edges and composed of different solid colors, adding to the ambiguity. In her artist statement McNeil references the notion of the “palimpsest,” perhaps as a way to describe the successive layers as occluding any precise meaning beyond the formalistic, and paving a way for an invigorated abstraction in painting for our present era.

In the compelling “Soft Landing” (72 x 66 inches), blue, beige, black and gray bands meander over the surface. They resist any attempt at uncovering letters, but still hint at a cipher of some sort. These bands of color pass over a dark and cloudy ground punctuated by the raw canvas, clearly visible throughout.

The exhibition includes a suite of six paintings on a much smaller scale that could serve as studies for larger works, but hold up brilliantly on their own. A monograph featuring McNeil’s work is due for publication by Radius Books later this summer. Considering the bold path she has set out for herself, there is plenty to say and more to come.