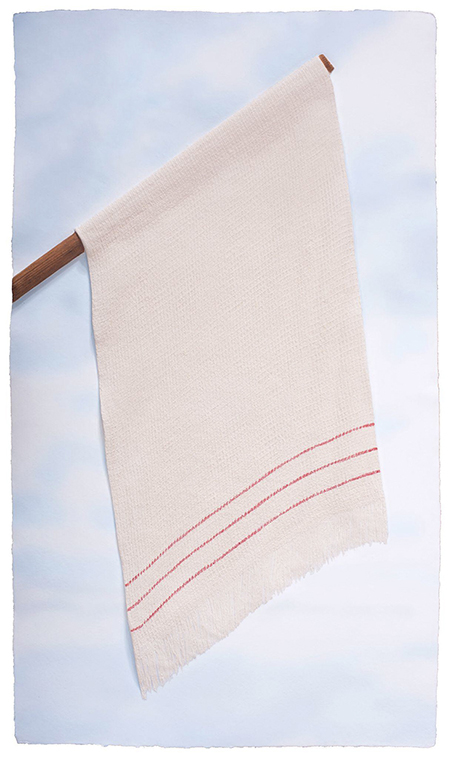 A flag occupies a twofold space capable of functioning alternately as a sign and a symbol. A white flag waved near the end of a NASCAR race signals the drivers have one lap to go, while at the same time symbolizing and stimulating the rising level of excitement amongst the spectators. National flags work both as signs of specific countries and as patriotic symbols, often with strong military, historic, and religious associations.

Sonia Clark, one of the finest craft/fiber artists working today, presents multiple works based on her discovery of a flag in the archives of the Smithsonian’s National Museum of American History in Washington, D.C. The sign-symbol she found there is the small, white, thoroughly unremarkable dishtowel that when hoisted high on a pole by the Confederate army at the Appomattox Court House in 1865, signified the South’s surrender and with it the end of the American Civil War. Clark wove the first of several iterations of this flag in 2019 as a large-scale 30 x 15 foot replica. Displayed horizontally on the ground, the piece was made in conjunction with the Fiber Workshop and Museum in Philadelphia and served as the centerpiece for her show there titled “Monumental Cloth, The Flag We Should Know.” Indeed, in its dramatic enlargement, the piece became not only a nominal sign of the conflict’s ceasefire but also a command to give up the traitorous, racist, authoritarian values and practices for which the Confederacy stood.

The Smithsonian American Art Museum (SAAM) in Washington, D.C. acquired this piece, and featured it in a group exhibition of other leading American craft artists, entitled “The Present Moment: Crafting a Better World.” The show opened on May 13th of this year in SAAM’s Renwick Gallery.

More recently and in collaboration with the skillful printmakers at the Mixografia® Workshop, Clark produced an exact print replica of the flag in paper in its original size of 17 x 41 inches. Clark found herself drawn to the workshop’s unique capacity to produce three-dimensional prints in paper using real objects, whose volume, contours, character, and heft Mixografia® prints accentuate and magically preserve. Indeed, the process of printing Clark’s work involved the construction of a curved armature-like frame over which the actual flag was draped before printing. The finished print presents a trompe-l’oeil illusion of this previously unknown detritus of American history.

Clark’s show includes this flag along with a handful of other thematically related small works. Entitled “Confederate, surrender,” the show’s opening was purposely chosen to coincide with the launch of SAAM’s exhibition the day before. What wasn’t scheduled was that on that Saturday a white supremacist teenager would murder 10 innocent African Americans who were food shopping in a supermarket in Buffalo, New York.

It’s an unwelcome liminal light, but it sharpens the meaning of Clark’s work. At a time when communities are demanding the removal of Confederate emblems of oppression, Clark’s work brackets the desperate country that continues to suffer institutionalized racism. Her flag supplies a ray of illumination challenging us to find a path toward racial justice and national reconciliation.

Given this emotional center, we should not overlook the additional five small sculptural works. A miniature wooden replica of a rollercoaster called “Rebel Yell” is based on a real ride of the same name, located at Kings Dominion Amusement Park in Richmond, Virginia, the artist’s hometown. The piece includes an audio component which can be listened to through headphones. Not used on the ride itself, the tape presents a recording from the Smithsonian archives of former Confederate soldiers “performing” the actual Rebel Yell battle cry. Shrill in tone and savage in spirit, this is not a recording the artist wishes us to listen to with pleasure (https://www.si.edu/object/yt_s6jSqt39vFM).

In the center of the small gallery sits another thought-provoking piece. On the cover of an old history book about the Civil War, Clark positions a collage of an American and Confederate flag, compressed as if to fuse the two objects. Clark’s piece gestures toward the hope that Americans will find a way of living together and respecting one another’s differences. Not soon, but now.