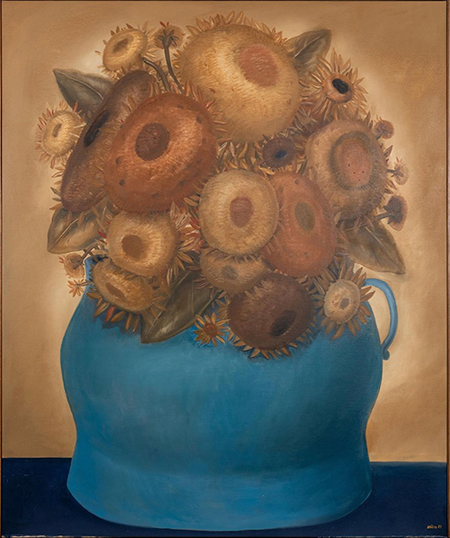 Born in 1932 in Medellin, Colombia, and still creating art after more than 60 years, Fernando Botero’s style — drawing, painting and sculpting people, figures and still lifes in large, exaggerated forms — is strikingly his own and familiar to millions internationally. As he told MOLAA’s Chief Curator Gabriela Urtiaga, “I am interested in expressing the manifestation of volume in art ... When I was in Europe, especially in Italy, I rationalized the importance of volume because I saw that all Italian painters, like Michelangelo, Raphael, Giotto, Masaccio and Piero della Francesca, made a celebration of volume … They did it to exalt the sensuality of the subject, to exalt the form and color.”

Botero imbues his work with a harmony that blends those formal strengths with humor, sensuality and, surprisingly an element of political messaging. Nowhere is this more explicit than in his “Abu Ghraib” (2005) series of 79 paintings and drawings. They depict the torment and humiliation of prisoners held by American soldiers in Iraq. Unfortunately, although these works have toured venues in Europe and the United States, none are included in this show.

Two oil paintings and one charcoal drawing of nude women show off their large, stylized bodies. In “La Toilette” (2015), a woman’s full profile clearly discloses her corpulent naked body. Yet Botero humorously portrays her standing boldly at the bathroom mirror, applying makeup, combing her hair, and wearing delicate red heels. In the more modest “Woman in the Bathroom” (2002), a woman, having just emerged from the bathtub, holds a towel across her large body while gazing demurely at the viewer. The charcoal, “Woman with Mirror” (1998) places a seated naked woman on the edge of a bed, one leg draped over the other, regarding herself in a mirror. Indulging his love of opulence, Botero adorns her with three necklaces, a bracelet, earrings, and a headband. Another strong presence, full of sensuous flowing lines and curves, the large bronze sculpture “Reclining Woman” graces the museum entrance.

Several other works depict couples dancing, demonstrations of Botero’s reverence for his Colombian heritage. In two watercolors, “The Dancers” and “Dancers” (both 2019) couples dance gracefully, joyfully, and even spritely, defying the gravity of their large Boterismo bodies.

The artist’s stately bronze sculpture “Dancers” (1993) shows a couple in a classic dance pose, gazing into each other’s eyes. This piece, in counterpoint to his other representations of dancers, expresses a soulful side to Botero. The similarly dignified bronze “Horse” (2006) is a manifestation of his lifelong veneration of the animal, which he began drawing and painting as a teenager.

Another horse-themed work, the pencil-on-paper “President on a Horse” (1998) is an admiring drawing of his father (who died when Botero was four years old) proudly riding a horse. Compositionally and in its title, the drawing echoes the long tradition of equestrian statues of kings and generals.

The drawing “La familia” (1992) and painting “Family in the Plantation” (2020) depict family life. The former is a depiction of parents, two children, a dog and a doll. The latter, painted in bright, exuberant colors, conveys a typical family scene of proud parents and dutiful offspring, the father wearing a hat and tie, the mother in a pink dress, their daughter in a stroller and son on a horse, all relaxing outdoors. The largeness of the figures, including that of the toy horse, impart both grandeur and humor. Of all the Botero’s artworks in this show, “Plantation” may be the most prototypically Boterismo.

The artist also produces still lifes and portraits of flowers. His oil “Sunflowers” (1977) pays homage to Vincent van Gogh’s iconic version. While the Colombian artist’s version is reminiscent of the Dutch master’s, Botero’s vase and flowers are larger and broader, while the composition fills up the canvas. As in his portraits and family scenes, Botero explores volume, exuberance, exaggeration, and harmonious color. Two opulent still lifes, identically titled “Still Life with Watermelon” (painted in 1973 and 1976), are brightly colored and filled with large, delectable pieces of fruit.

Botero has said, “If you want to be an artist, always look up to those great artists who inspire you and push you to be a better person, a better artist and constantly keep learning every day.” Humble words from one of the world’s most recognized living artists.