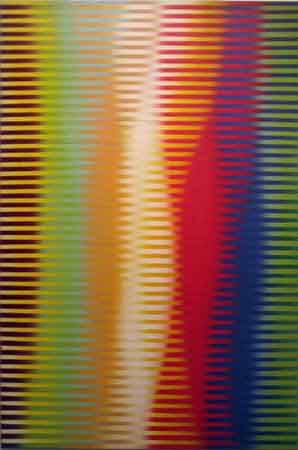 This ambitious exhibition, “The 1960s Revisited,” curated by New York gallerist Gary Snyder with a catalog essay by Los Angeles writer Peter Frank, covers both coasts and everything in between. Its basic premise, that modernism began slipsliding into postmodernism as early as the ’60s, is demonstrated through a series of works by “B-grade” artists: that is, artists who are not household names. Nonetheless, their work is of significance when it come to making the very point that this show makes — anybody and everybody was doing anything and everything abstract, all across these United States, well before the accepted –isms of the 1960s — Pop and Minimal — struck their poses upon art history’s boards. Nothing, says this show, is as we like to think of it in art, all discretely categorized without collision, or collusion, between movements.

As Frank posits, Abstract Expressionism was an old granddad by the ’60s, almost too shamefully decrepit to be trundled out in public. Still, he was the progenitor of a very large and robust family, after all, and we see his traces everywhere in this exhibition that focuses on how abstraction functions in painting. Mario García’s “Barn Series,” with its big red slash of a building layered in impasto upon the canvas, is an obvious example of how Ab Ex hung on for dear life into the ’60s; less obvious is Transcendentalist founder Raymond Jonson’s “Polymer #9,” with its carefully drafted organic figure slithering in and out of a vertically painted backdrop. Then there’s fellow New Mexican Bea Mandelman (an outstanding selection of her works from the ’60s hangs in a separate gallery space); her work was obviously influenced, right down to her audacious — and well-considered — use of pink, by Willem de Kooning as much as it was by earlier avant gardists, including Paul Klee and Gustav Klimt.

History is the deeper theme here. “The 1960s Revisited” informs as to where artists of that time period were, physically, to be found. The answer: in New Mexico and California at least as much as in New York, may come as news to some, but wouldn’t have to the very artists whose work is on exhibit. By the ’60s, it was no longer necessary to work in the world’s art capital; rather like today, an artist seeks recognition there, but as part of an international discourse that was already developing in the early second half of the 20th century.

After World War II, the Japanese arrived here to paint, and paint they did. One has only to view works by Matsumi Kanemitsu and Sumiye Eugenia Okoshi to see that the gestural in abstraction was a global impulse — an impulse that continues to thrive today. As tempting as it is to label pieces with the nomenclatures of, say, stain painting, Op Art, and the Washington school of geometric abstraction (there are fine examples of each) it is the sense of the contemporaneous that emerges like a gift in the works of these 30-some artists. To be asked to reflect on art’s history as lived by its stalwart supporting cast is a welcome gift for the eyes and for the mind.