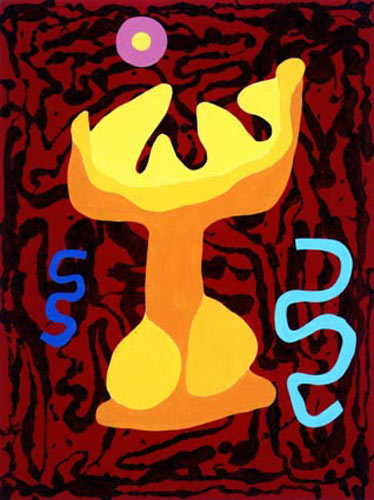 William Brice's work has been a low key yet persistent force in the increasingly cacophonous Los Angeles art landscape over the decades. Two years after his death, in 2008 the primary focus of this mini-retrospective is on his drawings from the heart of his career; though 'the heart' of one's career is typically a slippery notion. In this case it appears to hold true to the extent that the exhibition documents the evolution and transformation of Brice's work at its most volatile: from traditional female nudes in charcoal of the early 1960s to the Venus of Willendorf-meets-Greek-classicism abstractions from the mid-'70s and beyond, for which he became most recognized

Brice's patrician background included a hearty exposure to art from childhood. By the time he moved to L.A. with his family at 16, he had already attended the Art Students League in his native New York. In 1953, the gentle giant (he was 6'5") began teaching at U.C.L.A., where he became close friends and colleagues with Richard Diebenkorn, who also collected Brice's work. The earliest drawings in this show, female nudes in charcoal from 1960 and '61, may be traditional in subject, but are ambitious in their execution; De Kooning, for one, clearly comes to mind. In the larger context of that time in L.A., such work, though accomplished, was a far cry from the more radical avant-garde activity that was brewing concurrently over at the Ferus Gallery.

Brice's work was borne out of and remained aligned with the European modernist tradition, in his case one in which the figure is taken through a series of formal steps until it becomes its own language. In works from 1964 to '67 Matisse's influence is unwaveringly apparent, especially vis-à-vis 1967's “Reclining Figure with Blue and Green Pond,” a pastel whose black-and-white field is broken by a colored pool reflection with a Matisse-influenced palette. If these drawings marked Brice's initial transition, his major break occurred after a 1970 trip to Greece, when he had his own version of a “Les Demoiselles d'Avignon” moment: the Grecian ruins, their columns and their curves, became the other half of a vocabulary that he would marry with the human (predominately female) form. The first post-transformation work here is an untitled 1973 ink line drawing of beefy hand and foot stubs on their respective bases, a work that calls to mind the work of his student and eventual teaching colleague, as well as fellow gallery stable-mate, Charles Garabedian. The cartoonish quality of Phillip Guston’s post-Abstract Expressionist work also comes to mind.

Brice continued to evolve his Greek-inspired figurative forms. A few years later, in the mid-1970s, traces of his most iconic imagery began to appear: the abstracted female form consisting of a head, torso, legs and a profoundly circular belly, the latter often set within a square. There are numerous versions of the Venus of Brice, if you will, here - in ink pen, charcoal and pastel. Immersed in his most mature work, the drawings from the early-to-mid '60s fade, all of the sudden, into ancient history. Brice's oeuvre of graphic hieroglyphics included stylized leaves and a spiraling rose-like shape, along with all manner of columns. The drawings are spare and economic, but never cool (in one pastel and pen piece circa 1980, one might say he gets a little too warm). Some works strike more of an African tone than a Grecian one; others are a hybrid of the two.

In addition to the nearly three dozen drawings (primarily 24"x18" in scale), one large oil painting from 1978 and a vitrine filled with smaller drawings from the last ten years of Brice's life are also included. Restrained though Brice's career may have been, the legacy of his work holds up well, like any good classicist's.