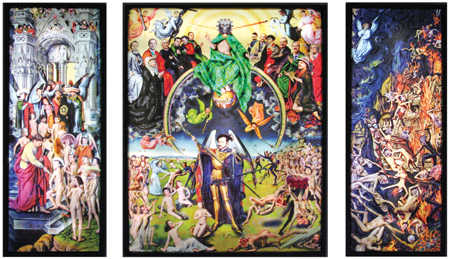 Einar and Jamex de la Torre graced Los Angeles with their presence this fall in numerous exhibitions--a solo show of new works at Koplin Del Rio Gallery in Culver City, and a retrospective at the Craft and Folk Art Museum (through January 9); in addition, they will have work in the upcoming exhibition "Obsidian Mirror-Travels: Refracting Ancient Mexican Art and Archaeology" at the Getty Research Institute (through February 6). They were awarded the prestigious San Diego Art Prize in September 2010 and awarded a commission for an exhibition at MACLA/San Jose Center for Latino Arts in 2009. Better known in the craft world, it is evident through this recent exposure that the de la Torre brothers' work extends beyond its craftiness. The works they make are hybrids--and as such are as visually expansive and content-rich as that of any artists working in Southern California.

Einar and Jamex de la Torre are Mexican-born brothers who currently split their time between Ensenada and San Diego, California. Born in Guadalajara in 1960 and 1963, respectively, and studied art in the late 1970s and early 1980s at California State University Long Beach, where they discovered glass blowing and fell in love with the material. Their work utilizes the techniques of this elaborate process, and they are without doubt skilled craftsmen. Yet there is nothing traditional in their integration of glass elements into their mixed-media sculptures. Their work stems from a collaborative process: as brothers, they rely on an implicit trust in one another to know when a work is finished and whether it communicates the given message to satisfaction. The de la Torre brothers embrace their history, the social issues of the cities in which they live and visit, and make works that examine struggles with the border, identity, race, and politics. Their work is as much an investigation into globalism and class as it is about the juxtaposition of atypical materials. Unusual pairings are prevalent in their work. These dualities include the relationship between craft and kitsch, glass and plastic, appropriation and creation, religion and myth, and stereotype and reality.

Whether the brothers' work is large or small, it can be appreciated on multiple levels. The first level of access is purely visual. Their floor sculptures and wall-mounted works are funky and colorful amalgamations of characters and caricatures, vehicles and vessels, tacky dime store objects and intricately blown glass. Layers of stuff become the form and content of the works and their pieces recall cabinets of wonder. There is not a moment to rest on any of their surfaces--the eye darts from beans to plastic beads to dominoes to Japanese anime figures to glass-blown masks--often all in the same work, while the mind tries to make sense of the relationships. The harder you look, the more you see. Reacting against the minimalist aesthetic that was dominant in the 1970s when the brothers were studying art, they purposefully embraced kitsch. Drawing from cartoon culture, the world of advertising as well as popular Mexican and Aztec traditions, the brothers fuse multiple styles and cultures.

The de la Torre brothers take delight in telling stories through their work and allow the pieces to be humorous and cutting simultaneously. While it helps to know the context, not every viewer is informed about Mexican history and the various politicians who the brothers poke fun at, yet even the uninformed can appreciate the ideas in their work. In Tanke You (2010), the barrel of a gun protrudes from a blown glass orange head whose body is a bright yellow tank. Charro (2010) portrays a Mexican cliche; a figure with a long black looping mustache, sombrero and patterned torso all exquisitely crafted from glass. In zAppo (2010), the base of the sculpture is a popular toy truck sold everywhere in Oaxaca. In reference to the ongoing political instability in Oaxaca yellow and red hooded figurines rally inside the bed of the truck holding their hands in the air in an act of defiance. The truck is driven by political leaders who are unaware of a giant skeleton that is catching a ride. This glass-headed winged creature that rides in the back of the truck towers above the rioting figures yet is neither frightening or threatening. While the work does reference specific political figures and sends them up in effigy, it also stands in broadly for the general conflicts that Mexico has experienced.

La Belle Epoch is a room-sized kinetic sculpture from 2001. The work takes its circular structure from Aztec calendars, yet also references the demise of the "Belle Epoque." Two large wheels rotate at different speeds dipping glass hearts that hang along the wheels spokes into a canoe filled with blood-colored water. The hearts drip as they emerge from the liquid. Written on each heart is a reason for death, each more senseless than the other--she died because she gossiped, he died because he was an idiot, she died for nothing, etc. Death imagery predominates. Actual knife blades attached to the back of one wheel function like chimes. As the wheel spins, the dangling blades rock back and forth, like gondolas on a Ferris wheel, clanging against the supports. As in most of their works, every inch of the surface is covered with found objectsÑbicycle wheels, dials from old telephones, as well as glass and plastic heads, hands and other body parts that are attached to the circular lattice. The work integrates Aztec mythology and Mexican pop culture with the de la Torre brothers' ad hoc style, creating an eye-catching and poignant commentary on the passage of time.
--
In the brothers' larger works they allow for a confluence of materials. Many of their pieces include sound or video elements that pushes their oeuvre from the world of craft into the world of mixed-media sculpture. Like their lives, their work straddles the borders of these disciplines. Indeed, with their work, labels like craft and fine art are irrelevant. It is evident that the brothers are hybrids, artists who exult in the virtuosity of their craft using whatever material best defines the ideas they want to communicate. Tula Frontera Norte and Tula Frontera Sur (both 2001) are large mixed-media figurative sculptures that include a dynamic element. Video monitors are a central part of the figures' anatomy. Created by stacking glass boxes and found objects, these figures are quasi-robots while simultaneously a type of deity. They have speakers as ears, guns as arms or legs, and are full of tourist tchotchkes that reference the cultures north and south of the border. Both sculptures' faces are transparent plastic masks, while the feet on the Norte figure are made from golf clubs; those on the Sur are woven scorpions. These humorous pieces refer to the totems that are often featured in displays of ancient Mexican and Aztec artifacts.

In Pho'zole (2008), the brothers utilize the montaging properties of Photoshop to create a floor-to-ceiling mural of overlapping circular images of food from Asian and Mexican cultures. Originally created for the 2008 California Biennial and reconfigured in its presentation in "Borderlandia: Cultural Topography by Einar and Jamex de la Torre" at the Los Angeles Craft and Folk Art Museum (CAFAM), the piece investigates the hybridization of Southern California food culture. Combining pho, (Vietnamese noodles) and Pozole, (Mexican pork and grit stew), the brothers referred to Mexicans frequenting Vietnamese noodle shops because the similarities of the dishes reminded them of home. This work also references the bastardization of tradition that happens in the fast paced, fast food world. In the work, numerous photographs of plates of food are juxtaposed with actual place settings including glasses and bowls, chopsticks, knives and forks. The bowls and glasses are full of figurines, toys, plastic food and real beans, submerged in resin. Video projections onto white plates display Asian friends of the de la Torre brothers' discussing (in their native tongues) the specificities of the food and cultures of both sides of the Southern California border. The work is visually dynamic, and a point of departure from the more totemistic works for which the brothers are well known.

La Reconquista (2010) juxtaposes three lenticular photographs based on Dutch artist Hans Memling's Last Judgment altar (circa 1470). The lenticular photographs, which allow different parts of the image to be seen from different vantage points, are set into a handcrafted structure that resembles a modern altar. This altar is placed in front of a digital mural that depicts a church interior whose walls have been covered with religious figures and symbols that reference things of worship in contemporary culture--Coca-Cola as well as religious deities. This work was originally commissioned by MACLA/Movimiento de Arte y Cultura Latino Americana, in San Jose, California to accompany a 2009 exhibition. A magnum opus, it fuses past and present, real and imaginary, as well as figures from Mexican popular culture. The symbolism is extensive. Many characters from Memling's original have been swapped for more contemporary icons, ranging from the religious (Jesus Christ) to the popular (Salma Hayek, Antonio Banderas and numerous Mexican political leaders and soccer stars). The use of Photoshop allows the de la Torres to mine archives and the Internet looking for images they can scan and later juxtapose.

In the triptych El Cakeito, 2010 the brothers used digital technology to create homage to a defaced Buddhist sculpture in Ensenada, which was donated to the city by the government of Nepal in 1992. The actual sculpture still sits on a hill overlooking the city, near a large cylindrical water tank known as el Cakeito. In the brothers' commemoration, a photograph of the sculpture has been digitally fused with images of artificial cakes that caught their eyes while traveling in Japan. According to the brothers, the layer cakes are symbolic of the stages needed to climb to enlightenment. In the triptych, plastic faces are placed over the cakes symbolizing the hungry souls that see the food but are incapable of reaching satisfaction.

The brothers' iconography of symbols includes hearts, skulls, dice, dominoes, dolls, beans, bottle caps, vessels, toys, hot rods and guns. There is an abundance of fake fur and knick-knacksÑ-things that can be purchased en masse and used to fill surfaces giving them color and texture. Excess rules in the de la Torre brothers' work; the larger the work, the more stuff that can go into it. The brothers speak of smuggling their works across the border. Since taking art from place to place is not a crime, I asked why they referred to it as smuggling. Their response: A truck full of what looks like junk goes back and forth between San Diego and Mexico. How do you quantify the parts before they are assembled? Do the parts have value? Because the brothers work on their pieces in both locations, they do truck them back and forth. Their works are assimilations of cultures and products and attitudes. They take from Mexico, or Japan, or the United States and assemble a collection of parts. As visiting artists, they blow glass where they can, at Pilchuck Glass School in Seattle, Washington, and at universities with glass shops and bring those parts back to their studio. Like a witches brew, some of this and some of that goes into the making. Embedded in the de la Torre brothers' work is always a celebration of the visual, a critique of cultural stereotypes, a challenge to tradition, and a nod to consumer culture.