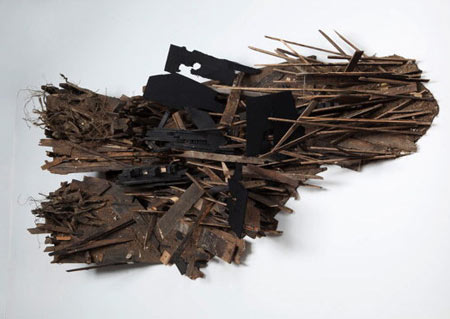 Environmental collapse is a theme many artists are exploring these days, although almost covertly: with nature on the rampage both in catastrophic events (the Japanese earthquake and tsunami) and through slower, equally pernicious processes (species extinctions, subpar harvests), there is a widespread feeling that we are, in the words of Monty Python’s Roger the Shrubber, “under considerable economic stress in this period of history.” But we may not want or think too long about or even say it, the forbidden word: entropy. The tendency of matter to disorganize into chaos was an abiding interest of land artist Robert Smithson (whose famous “Spiral Jetty” in Utah has fallen victim to rising waters and other depredations of time). It (ouch!) refuses to go away, however, resurfacing as in the political realm distorted into conservative anger at scapegoats (union teachers, underwater homeowners), and in the esthetic realm as art. Badly, in pop surrealism’s helpless waifs wandering through ravaged landscapes; and powerfully in the case of the work of Leonardo Drew. His gridded constructions of recycled wood, blackened with age or scorching, and pierced by eruptive branches and roots, serve as socioeconomic wake-up calls to global consumerism’s endless party. With their darkness, weight and fetishistic power, they’re the contemporary version of the old memento mori, the skull amid the flowers, exhorting us to think of the long-term picture.

Shown here are seven pieces, untitled, but numbered, like all of Drew’s work, all from 2011. They fall into four categories. “Number 11S” and “Number 13S” are square-format wall pieces composed of tightly packed grids of irregular wooden fragments interspersed with sections of trees — the domestic and the wild intermingled, culture and nature cohabiting, if not quite blissfully reconciled. “Number 11S” and “Number 12S” are irregularly shaped large wall-hung assemblages, fragments or extracts of larger wooden entities, but endowed even in dissolution with a powerful, weighty presence. Two triptychs of wood and paper, “Number 14S” and “Number 15S,” carry Drew’s sculptural concerns and poetically charged materials into shallow pictorial space, infusing the three-panel format of Renaissance religious painting — i.e., “Madonna and Child” flanked by pious donors — with the painterly vectors of Abstract Expressionism. (Drew was named after Leonardo de Vinci, of course, and was captivated by Pollock.) One assemblage on paper, “Number 19S,” apotheosizes the ignominious medium of toilet paper: torn, folded, wetted and dried into teabag-sized rectangles, they’re packed into columns and arrays, forming a weathered-looking matrix that is in turn overhung by grasslike sprays of white thread; its pale, elegant fragility seems rather anomalous in this otherwise dark, brooding convocation, but the harnessing of opposites is one of the artist’s ongoing methods, if not themes.

Drew, who grew up in a Connecticut public housing project—his first show, at age 13, was of swans and clouds, and was shown in a bank—now lives in New York, Texas and California. Lorraine Edwards in Sculpture magazine discerned in his “lyrical allegories of decay and regeneration” racial and historical dimensions as well, citing the satirical historicizing of David Hammons as a precedent; other critics have seen references to “bonding, lynching, pain and death” in the work of this sculptor who abandoned painting and drawing because they were too easy for him. He now tries, after trips to Third World Senegal and Brazil, to forge metaphors for racial memory.  It’s testimony to the richness of Drew’s imaginative vision that it bears such varied interpretations, but, then, economic and ecological exploitation are connected: they’re the hidden servants behind capitalism’s glittering party.