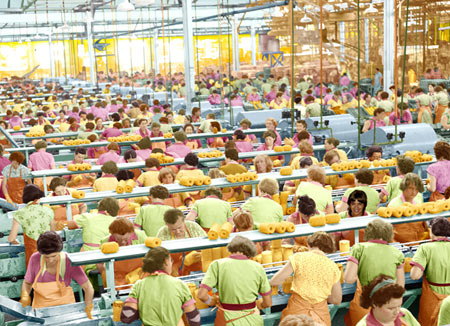 “Loving mothers, slapping mothers, suffering mothers, protective mothers – I think I got them all,” Australian artist and filmmaker Tracey Moffatt says about “Mother,” one of seven cinematic montages featured in “Handmade,” a survey of her work from 1999 to 2010. From Woody Allen’s giant Jewish mother in the sky, to Al Pacino arguing with his girlfriend’s mother in “Scarface,” to Jane Fonda and Katherine Hepburn bonding as mother and daughter in “On Golden Pond,” “Mother” borrows short clips from a wide range of movies and television shows. Orphaned as a child, Moffatt says she grew up knowing two mothers, which made her an expert on the subject.

With a background in TV documentaries and music videos, Moffatt has conceptually edited these memorable mothering moments into a fluid, fast-moving filmic montage that evokes rising and falling emotions in ways similar to a musical composition. And as in much of her work, Moffatt critiques feminine stereotypes with laser-directed wit.

Moffatt admits she appropriated the clips without getting any legal permission, but being free to pick what she wanted to use gave her the chance to play with and manipulate the scenes into the rhythms she wanted to create. Actually, the short sequences probably fall within the realm of fair use. Though Moffatt did research and had friends suggest scenes, she relied primarily on the encyclopedic film knowledge and DVD collection of her collaborator and editor, Gary Hillberg, to come up with the nearly 1,000 TV and film clips she used. Unlike academic documentaries of movie history, Moffatt’s montages aim mainly for the heart, but she expects you to use your head, too.

The clever installation projects the seven montages on the four walls of an open cube within the gallery, which also features Moffatt’s photographic series “First Jobs.” Using black-and-white photos from the 1970s, Moffatt has hand-tinted them to create somewhat cartoonish images of bottom-of-the-ladder jobs such as waitress, meat packer, convenience store clerk and assembly line worker in a pineapple canning factory. Moffatt actually worked at these jobs as a young, struggling artist and she has inserted an image of her young, beaming face into each of these studies in dead-end employment that have somehow become colorful, cherished memories.