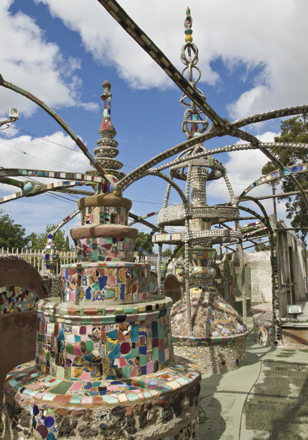 On the homepage of the Watts Towers Art Center website appears this Calvin Trillin quote from a 1965 issue of The New Yorker: "If a man who has not labeled himself an artist happens to produce a work of art, he is likely to cause a lot of confusion and inconvenience." In the 90 years since Simon Rodia first broke ground on his life's work of clay, steel, and mosaic, that sentiment has proven to be the understatement of the century. This historic accomplishment of folk art and vernacular architecture has become an internationally beloved example of Outsider Art's power to reach across cultural, generational, and commercial boundaries. Its turbulent history of contested dominion and problematic conservation has also sparked heated debates on issues of cultural equity and community heritage--and the new one-year plan for a LACMA-run stewardship to whip its archives, endowments, and preservation strategies into shape has so far only succeeded in fanning the flames of the controversy.

Brooke Davis Anderson, Deputy Director of Curatorial Planning at LACMA, who is spearheading the Irvine Foundation-funded project, seems to understand what Trillin was getting at, asserting that she is, "interested in really trying to honor the seriousness of the object and Rodia as a working artist--not an idiosyncratic person, not a solitary person, but working at a craft. I'm new to Los Angeles, I'm new to LACMA, but I'm not new at all to art like Watts Towers or artists like Simon Rodia. For the last 25 years I've been specializing in self-taught artists and their work. I knew of Watts Towers--and visited them--long before I knew of LACMA." In the broader context of Outsider Art, Rodia is an obvious hero, redeeming the potential for beauty in discarded materials, working tirelessly on his own time to complete his mysterious field of ornamented spires over the course of nearly 35 years, before walking away one day, never to return. Besides the confusion, Rodia's advanced but still home-brewed construction process is a major factor in its physical decay--as are the stolen caresses of people lucky enough to show up when the iron gates are unlocked, and of course the sun, heat, and pollution that threatens all LA architecture also torments these opulent, quirky gardens, arches, towers, and the ship named for Marco Polo, whose wanderlust Rodia (who also sailed from Italy to America) clearly inherited. In the wake of his abrupt departure, he left the ownership of the site in a state of quasi-limbo that the city's Parks Department and Department of Cultural Affairs, along with a series of non-profits, has been trying to sort out ever since.

Rodia was a white, lower middle-class, blue collar laborer--the neighborhood was incredibly diverse when he arrived there, and as far as anyone can tell, it was never about race for him--so why is it about race now? Because of things that happened in Watts that were set in motion generations after Rodia left for his rural retirement, and are still fulminating. Mark Steven Greenfield, an accomplished visual artist and the former Director of the Watts Towers Art Center, has justifiably strong feelings on the subject. "What a can of worms you've opened up. There is probably no more political piece of art in the city. The Watts Towers have stood as a silent witness to a community whose demographics have seen a remarkable shift following the rebellion of 1965. Indeed they provide a counter-balance to the dubious reputation heaped on a community that the city has historically ignored, for reasons too numerous to mention. The Towers have been a pawn played by anyone who recognizes the potential for social, economic or political gain, and as their value as a tourist destination is fully realized, they will continue to be the scene of more game playing."

There is a gorgeous new children's book, "Dream Something Big," due out this summer from Penguin. Its artistic collage-based illustrations and build-your-own Watts Towers instructions make no mention of these tensions or what Watts has been through--not that they needed to for a children's arts and crafts book. But on some level it is an example of how an intended homage in fact takes the thing at least partly out of context, getting in its way right to the heart of the matter. Should the Towers be regarded as a work of art unto itself, a stunning bit of inspired craftsmanship that might have been made anywhere Rodia happened to be living from Pittsburgh to Salinas? Do audiences need to take the civic history of Watts into account at all times when evaluating the work? Rodia famously inscribed the work Nuestro Pueblo, "Our Town," but what does it mean when something is said to belong to everyone? Brooke Anderson thinks of it this way: "There is still a direct link between the maker and the community. We still have members of the community who will tell you that when they were children they would climb the towers (even though we wouldn't allow this now). For the many different constituencies down there it tends to be a meeting place. That for me illustrates the power of art, creating a neutral space where we can come together and negotiate whatever is going on with our community socially, culturally, economically, politically, etc." That is a sincere sentiment, and a rich idea--but the community that has evolved and grown around the Towers is anything but neutral on the subject.

"For some people," continues Greenfield, "they represent symbols of defiance, while for others they represent hope. Watts has always been on the 'verge' of something and if it's going to happen, the Towers will be ground zero. For me they are the embodiment of that creative spirit that compels us to take that which has been discarded, both literally and symbolically, and make something beautiful out of it." Before LACMA got involved, The Watts House Project had already been flourishing under the leadership of artist/activist Edgar Arceneaux and erstwhile co-founder Rick Lowe. The more recent participation of Alexandra Grant and a solid, high-profile board of advisers made up of other well-known artists with community practices and in some cases, law degrees--not to mention the wild popularity of Grant's Love House project and the necklaces that funded it--are a big part of LACMA's interest. (Grant's project envisions the construction of a large rooftop sculpture with the word "Love" atop a nearby private residence on 107th Street.)

The presence of contemporary uptown gallery artists on the site has acted as a kind of bridge to the mainstream art world, for better or worse. "LACMA has never had anything to do with this community in the past, and now that the Towers are getting some attention there is a certain cachet to being associated with them," Greenfield notes. "It is seen as a missionary move that's an insult to a community that has nurtured a rich cultural tradition without their supposed validation. There is an expression that rings true in Watts, 'If it's not with us, then it's not about us.' Suffice to say, anyone who tries to engage Watts from the outside is suspect."

The Watts House Project describes itself as "a collaborative artwork in the shape of a neighborhood redevelopment" centering on East 107th Street, across from the Towers. Started with seed money from the 2007 Hammer Museum Artist Residency Program, Arceneaux saw through the germ of an idea to use architecture and the resources and creativity of the existing community to transform it from the ground up. Artist Alexandra Grant (a text-based artist who has shown at MOCA and in the recent 2010 California Biennial) was first inspired to get involved with Watts House Project by, "Incredible synchronicity. I come from a family and educational background steeped in ideas of public service. I began to think about what it would mean to be an artist-philanthropist--to give creativity as a form of capital or energy to a community not my own. I joined the Watts House Project team--Jessica Ruvalcaba and Sue Bell Yank, Lauri Firstenberg and the residents on 107th Street--to found the Board and help create the infrastructure. The good news is that we've raised the money to build the Love House. We start construction right away. The Love symbol is a bridge, a promise of integrity. It was important that the Love House would create a win-win exchange with the public, and a brand that would be based on generosity rather than profit-making."

To artists like Grant, community-based work is itself a kind of interrogation of society. A concept as simple and earnest as hers ironically ends by asking the thorniest questions, to open up Greenfield's "can of worms" with ideas about how artists work with others, especially underprivileged communities, without taking their space. Grant continues in this vein, "Why are so many people interested in participating in this kind of work now? Is it a coincidence that the US president began his career as a community organizer? Is there a relationship between artists reaching out to non-art communities at a time when arts education funding is being cut? What is the difference between community art and public art? Who is working to define these boundaries? How do you measure or quantify the exchange between artists and the communities they get involved with? How do we think of the avant-garde in terms of this work? I think about Rosalind Krauss' sense of the dialogic site first being the object, then the space of display itself, then land--and now community as site. How do you honor all the histories of waves of immigrants in a place like Watts? European--Simon Rodia was from Italy, remember--Southern Black, Jewish, and now Latino? How do the Watts Towers tell the story of each of these immigrant groups? How do you honor the contributions of African-American artists and conservationists who saved the towers? How do you serve the now-70% Latino population? How do you attract people to Watts who still think about it as a place of gang activity and violence? What role do the towers and art in general play in this kind of special/social re-imagining? How do we talk about race? How do we not talk about race?"

One place that doesn't seem to be talking about it is LACMA. But then again, do we really want them to? Is it not far better for them to stick to what they are good at, that being conservation, fundraising, and publicity, than to enter into this particular aspect of the fray? The museum does have a good history with craft-based movements in Los Angeles and there is every reason to believe their campaign of improvements will be a success, at least by the terms as they define them. The question is, at whose expense will that success come? Quite possibly the area's residents, if steps are not taken to ensure their equity in future decisions made about the profile of their neighborhood.

Michael Govan's official statement on the project states that: "By expanding LACMA's mission to include the care, preservation, and interpretation of architectural and sculptural works of art within the community that are at risk of neglect and deterioration, we are changing the way LACMA functions as a museum, from what we collect to how we work within the community more directly." Note well, he said "within," not "with." Maybe that's nothing. At the very least, this off-campus undertaking must help assuage any lingering homesickness for his old job at the Dia Foundation; it's clear Govan sees the Towers as a kind of manifest destiny for the institution to annex or manage: a slice of micro land-art, LA's very own Lightning Field. Except that it's more of a lightning rod.