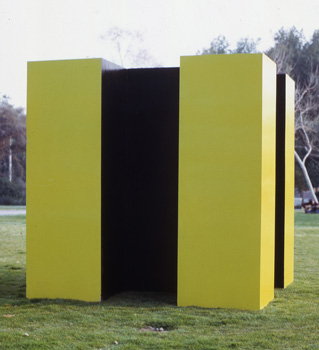 In 1969, Mowry Baden, the new art department chair at Pomona College hired Hal Glicksman as Gallery Director and Curator for the College Museum of Art. Glicksman, a native of Los Angeles (Beverly Hills High School and a B.A. from UCLA), had come to Pomona from the Pasadena Art Museum, where he had worked for six years with Walter Hopps. Those years included exhibitions such as the “New Painting of Common Objects,” (1962), the first major retrospectives of Marcel Duchamp, Kurt Schwitters and Joseph Cornell, as well as Frank Stella’s first museum show. As Exhibition Designer-Preparator, Glicksman worked on 41 major exhibitions as well as the USA entry for the Fifth Biennale de Paris (1967) and the Eighth Saõ Paulo Bienal (1965).

Glicksman’s first installation, a Robert Irwin “disc” painting, hung in the gallery for six months, during which  students spontaneously came to gaze and meditate, watching it disappear and “bounce” in the eye. The “Artists Gallery,” a space specifically for artists-in-residence to create room-sized installations, was one of the first museum residency programs in the U.S. Artists who participated included Michael Asher, Michael Brewster, Ron Cooper, Tom Eatherton, Judy Chicago and Lloyd Hamrol.

“Hal Glicksman at Pomona” is the first of three exhibitions in a series titled “It happened in Pomona. Art at the Edge of Los Angeles 1969-1973”  (to be followed by: "Part 2: Helene Winer at Pomona," and "Part 3: At Pomona: Studio Art Faculty and Students") documents Glicksman’s  interaction with the museum space, the artists and with the works they produced. Narrating the history of these ground-breaking years, it re-creates some of the works in those exhibitions. The inclusion of new works demonstrate the continuing diverse directions that these artists remain committed to. “At the “Edge of LA,” they were “on the edge,” not merely the periphery, breaking down traditional concepts and going beyond what is there materially, aware of a bodily energy, a resonant force interacting to and within shifts in the aesthetic environment.

Robert Irwin’s “Disc” returns, embodying as it does the elements and discourse present during Glicksman’s tenure: performance,  sound, and the physical and bodily perceptual awakening of the viewer that shifts “sculpture” into a different state of awareness. Chris Burden will show a newly fabricated untitled  six–foot cubic sculpture originally created in 1967 while an undergraduate at Pomona. The black and yellow pattern covering the surface defies the eye to see the object as a cube or a series of columns.  Burden views this work as a preface to his performance art because of its interaction with the viewer. Recapitulating the currents of the sculptural installations that defined Glicksman’s tenure, it will be installed at the Museum’s entrance, a fitting guardian for the three shows.

Now considered one of the first “institutional critiques” into the interrogation of the role of the museum and the community, Michael Asher’s 1970 installation altered two galleries, creating  two triangular spaces connected by a narrow opening that shadowed one, and opened the other to the street during both day and night. Opening up to the “world outside the walls” that work brought awareness of the changing physical and aesthetic manifestations of light and space. it also informs his new work, included in the Whitney Biennial in 2010, referencing as it does the critical approach of the earlier work. Asher’s new installation will leave the Museum space open twenty four hours a day for the ten weeks of the show.

Three other environmental installations recreated by Tom Eatherton, Lloyd Hamrol and Ron Cooper invite the viewer to enter into another sense of awareness. Eatherton’s “Rise” (1970) refers to a type of para-psychological experiment, the ganzfield experiment,  by creating a room-size environment in which a glowing and indeterminate space shifts the perceptual awareness of each viewer as they pass through the room. Hamrol’s “Situational Construction for Pomona,” composed of balloons, lead wire, plastic sheeting and colored light creates an environment allowing the viewer to look  through a window into a luminous water-filled room and “see” an abstraction of a sunset landscape. In Ron Cooper’s 1959 documentary film “Ball Drop” a ball slowly descends to shatter a massive glass panel, giving the viewer quite a jolt as the ball shatters the glass.

In the seventies Judy Chicago’s “Atmosphere” performances featuring floating wisps of color, created from commercial fireworks and road flares of colored smoke that “soften and feminize” the environment, appeared at Brookside Park, The Pasadena Art Museum, on beaches at Trancas and Santa Barbara and around Joshua Tree. At Glicksman’s invitation in 1970 Chicago created an “Atmosphere for Pomona College, “Snow Atmosphere“ with all white flares on Mount Baldy. Large photos documenting the original performances are included here, and in addition Chicago will create a new pyrotechnic performance, “A Butterfly for Pomona,” on January 12, 2012.

Lewis Baltz’s “Prototypes” emerged from an encounter with Glicksman in 1969 when was a graduate student at Claremont, met him. Upon seeing his work, Glicksman invited him to teach photography at Pomona. That year ended with a show of the “Prototypes.”  An earlier black-and-white photo, “Laguna  Beach” (1967) reveals the world beyond and behind the tourist eye: a blank wall with a light fixture, a rectangular shape (perhaps a boarded up window) and a white rectangular form hanging down over the left side, transforming the expectations implicit in the title of what we see.

Upon leaving Pomona, Glicksman continued organizing shows with artists and works that changed art history, not only in Southern California, but on a global level, contributions that like these demand more study and more recognition.