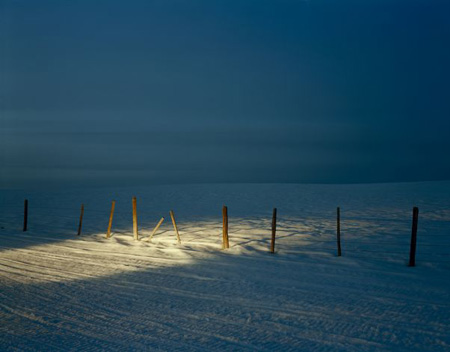 In her monumental photographs of Idaho’s remote Sawtooth Valley, Laura McPhee investigates the contemporary reality of the majestic landscapes in the West. Her approach is decidedly 19th century, reminiscent of landmark paintings by Albert Bierstadt or Thomas Moran. For three years, she lugged around a 55-year-old Deardorff 8-by-10 viewfinder camera and used the traditional darkroom wet process for printing each mammoth 6-by-8-foot color print. The scale and breath-taking clarity of the mural-size photographs in “River of No Return” is even better than HD, providing a life-size perspective that places the viewer in the midst of the landscape. But the natural beauty of the rugged mountains and birch forests is besmirched by evidence of humankind.

Calendar-perfect mountains along “Fourth of July Creek” - peaks lit by the setting sun with a picturesque, zigzagging wood fence in the foreground - provide the backdrop for an irritating parade of little red flags lined up to deter wolves from killing calves. A blue tarp covering irrigation pipes intrudes on the same landscape during a windswept Winslow Homer rainstorm. The sun streams through a birch tree grove like a Robert Frost poem, only the tree trunks have been crudely carved with the names of sheep herders.

In the grisliest image, the butchered remains of a Rocky Mountain elk have been strung from trees and stacked on the snow-covered ground. The blood-splattered snow is a graphic symbol of the close connection between man and nature. Though it’s easy for city dwellers to keep nature at a romantic remove, the 100 or so residents of the Sawtooth Valley engage daily in the messy struggle of trying to wrest a living from the land.

A flat-bed trailer loaded with giant boulders, excavated from Sawtooth National Forest for landscaping in Sun Valley, appears like an alien-invasion craft hauling off eccentric booty. Fire burns the under layer of leaves on a forest floor, while burned-out tree trunks stand as silent sentinels in a hellish landscape of blackened destruction. Black Angus cows being loaded into a chute resemble refugees fleeing a battle zone.

But McPhee also documents how the land affects people in a sequence on the life of a teenage girl, Mattie. Along with riding the school bus and protectively holding a chicken in her arms, Mattie is shown in two striking, full-length portraits: wearing a ball gown and looking sophisticated contrasted with her clad in jeans, flip-flops and tan canvas coat holding a dead turkey by its legs, wings outstretched like a fallen angel. From tomboy to debutante, Mattie’s life is one of constant contradictions.

Reminiscent of the panoramic canvases of the past, McPhee’s gigantic photographs address contemporary issues about the use of the environment, pitting rugged individualism against the needs of the community, and the public’s desire to preserve the natural world against free-market developers. Rather than editing out the manmade objects that distract from the postcard-view of the West, she uses them as clues to its dramatic dichotomies.